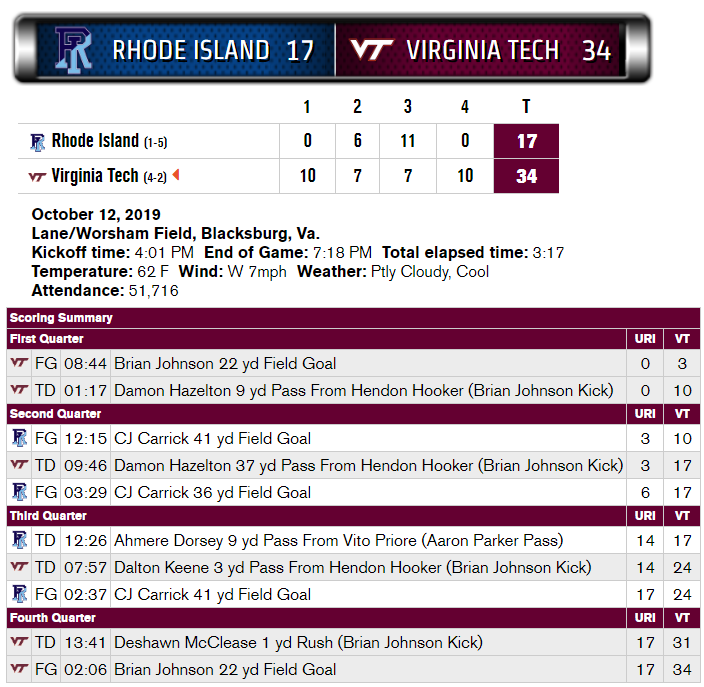 There was a lull inside Lane Stadium. Rhode Island had just marched right down the field to begin the second half. A nine-yard touchdown pass from Vito Priore to Ahmere Dorsey and the subsequent two-point conversion made it a 17-14 Virginia Tech lead with 12:26 left in the third quarter.

Terius Wheatley’s mishandling of the ensuing kickoff pinned the Hokies back at their own 7-yard.

No problem for Hokies quarterback Hendon Hooker, though.

Poised. Confident. Unflinching. Hooker engineered a 10-play, 93-yard touchdown drive that was capped off with the signature play-action fake and dump off to Dalton Keene in the flat for the 3-yard touchdown.

“There was no panic in the huddle,” Keene said. “It started with Hendon.

“He looks comfortable back there, which I was pretty happy with. A lot of times when you have a new quarterback, especially with these big home games, they can get a little nervous. He’s composed back there. He’s a leader in the huddle. He’s one of those guys that you can look to. He’ll calm you down.” 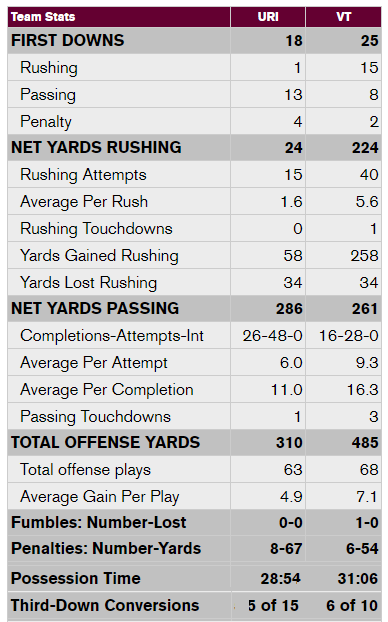 From that point forward, Virginia Tech (4-2, 1-2 ACC) added a touchdown from Deshawn McClease and another Brian Johnson field goal to defeat Rhode Island (1-5) 34-17.

On the 93-yard drive, Hooker began with a 26-yard completion to Damon Hazelton on a deep out. Five plays later when faced with a third-and-six, Hooker stood strong in the pocket in the face of pressure and unleashed a pass down the left sideline right on the money. The ball dropped into James Mitchell’s bread basket for 27 yards between two defenders.

“I saw a great matchup,” Hooker said. “Safety rotated and wasn’t able to get off the hash and get over the top to the fade. James made a great play, and we kept the chains moving.”

The signal caller did it with his feet, too, picking his spots on a quarterback draw for 10 yards down to the Rhode Island 7. A four-yard Deshawn McClease rush and a three-yard check down to Keene extended the lead to 24-14 with 7:57 in the third.

“James Mitchell made a play on the far sideline on third down,” Fuente said. “That was a big momentum deal… That was a nice response by our kids.”

Hooker and Co. went the length of the field, and in the process epitomized the Greensboro native’s performance in his first start in front of the home crowd.

“[It’s] a love for the game,” Hooker said. “I love going into the huddle and calling long plays, orchestrating people, and telling them where to go.”

A week after carving up a stout Miami defense for 42 points with 260 total yards and four touchdowns, Hooker delivered again, going 16-of-27 passing for 261 yards and three touchdowns along with 43 yards rushing. He effectively stretched the field, completing five passes of 25-plus yards.

It was the second straight week that the Hooker-led offense committed zero turnovers after 11 Virginia Tech turnovers through the first four games.

“The biggest thing is that he’s taken care of the football in both starts,” Fuente said. “He’s done a great job of that. I know there’s some passes today that he wishes he had back, and there’s some guys around him that could have made a few more plays.”

Both of Hooker’s touchdowns in the first half connected with Damon Hazelton. The redshirt junior wide receiver ended the day with five catches for 93 yards. It could have been an even more impressive outing if Hazelton had held on to a deep post route that could have resulted in a 71-yard touchdown in the second quarter.

“We certainly needed [Hazelton] today. We basically had four healthy scholarship receivers today.” Fuente said, with Tre Turner and Phil Patterson both seeing no action. “We certainly need him to be good and he was, but I think he knows he had an opportunity to be really, really good.”

“I’m trying not to be too hard on myself about that,” Hazelton said. “I would like to have that play back… We just have to go to work. That’s the only way to solve it. Focus a little better and get back in the lab with Hendon to get better timing and better chemistry.”

The defense had its issues at times containing Rhode Island’s pass-heavy attack. Vito Priore passed for 286 yards and a touchdown.

The Hokies knew the Rams had some talented receivers, and Isaiah Coulter and Aaron Parker proved them correct by hauling in nine catches for 152 yards and five catches for 64 yards, respectively.

“You’ve got to give Rhode Island credit,” defensive coordinator Bud Foster said. “Their quarterback played a lot better than I thought he could and that he’s shown. I thought No. 6 (Parker) and No. 8 (Coulter)… I felt like those guys could play at a lot of places, and I’m not just talking in that level, I’m talking at our level.

“I thought we were a little sloppy at times. We had a sack and we line up offsides. That’s inexcusable to do that. We turn around and have a pass interference penalty right after that. Those are just things we have to eliminate.”

Mike linebacker Rayshard Ashby powered the defense with a team-high eight tackles, but it was nickel Chamarri Conner who came through in a big way, particularly as a blitzer. He nearly got to the quarterback earlier in the game, then with Rhode Island driving late in the fourth quarter down 14, Conner came off the edge and sacked Priore for a 14-yard loss, pushing the Rams back from the 5-yard line to the 19, where Rhode Island eventually turned it over on downs.

“He gets better and better every time he blitzes,” Foster said of Conner. “The one thing he does do is give us some coverage ability. He’s a big body that can be a thumper a little bit in the run game. He’s shown the last few weeks that he can be very disruptive as a pass rusher… I don’t know if we’ve had one quite as big and quite as physical as him in a while that can run.”

The Hokies didn’t exit Saturday’s contest unscathed. Reggie Floyd was ejected for targeting with 10:17 remaining in the fourth quarter for a hit across the middle. As a result, the lone starting senior on defense will miss the first half next Saturday against North Carolina.

“It looked like it was [targeting] on the field,” Foster said. “That’s just part of the game. You can’t lower your head and hit with the crown of the helmet… We’ll have to respond next week because obviously we’ll miss him for the first half.”

That game next Saturday versus the North Carolina Tar Heels will kick off at 3:30 p.m. from Lane Stadium and will be televised on RSN. UNC had this weekend off and is currently 3-3 overall, 2-1 in the ACC. It’s a key game for the Hokies in a Coastal Division race where everything is up for grabs. 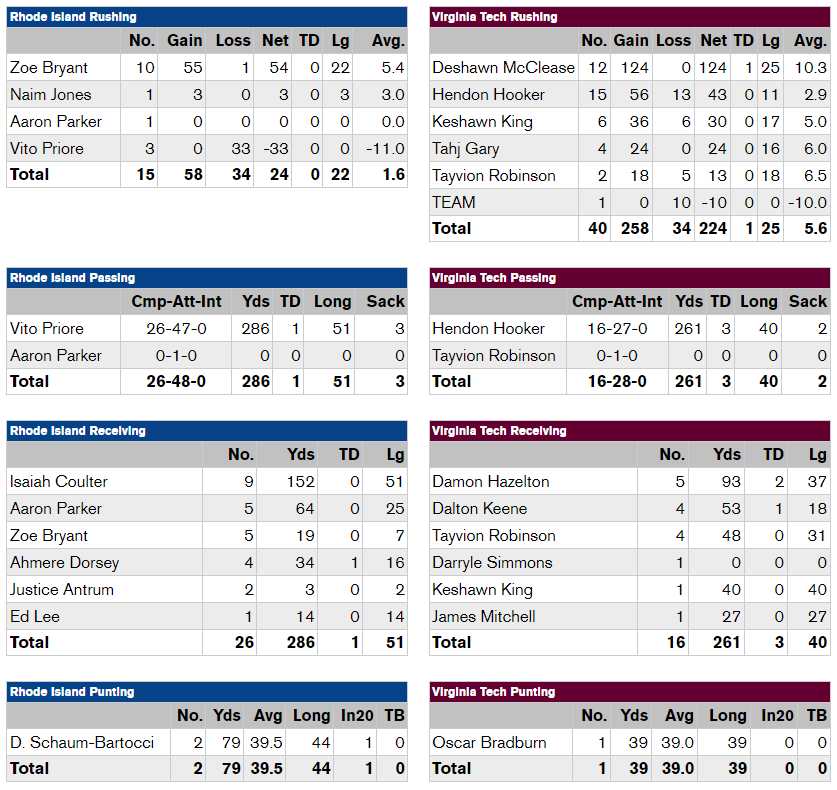