A couple weeks back, Virginia Tech head coach Justin Fuente promised to fully answer questions about the Brock Hoffman situation once a verdict was reached.

On August 27, the decision was announced that Hoffman was denied his NCAA appeal for immediate eligibility. During today’s press conference, Fuente was given his pedestal to sound off on the decision that has already put the Hokies in a bind, with starting center Zachariah Hoyt leaving in the fourth quarter of the 35-28 loss to Boston College with an apparent lower body injury.

“You look at Brock and his family and what they’ve been through and how they handled the situation they’re in, I think it’s admirable,” Fuente said. “He’s a kid who did not quit on his football team. He did not leave them in the middle of the year. He did not leave them right at the beginning of the year when some people have. In my estimation he went about this thing the right way and was penalized for it.

Hoffman’s mother was diagnosed with acute neuroma, a non-cancerous brain tumor that still impacts her vision and hearing today. Hoffman transferred from Coastal Carolina to Virginia Tech in order to cut his commute home to Statesville, N.C. in half in order to care for his mother and bring her to appointments.

Originally, the NCAA denied Hoffman’s request for immediate eligibility because Statesville was 105 miles away from Blacksburg – five miles outside the required 100 mile radius. Over the course of the last appeal, the Hoffmans spent countless hours supplying medical records and information to the NCAA only to be denied for the final time this past Tuesday on the basis that he waited to transfer two years after his mother’s diagnosis.

“What the NCAA put that family through in terms of requesting information, chasing their tail, for lack of a better term, constantly,” Fuente said. “Requesting new and different information, every time the family put in everything they can to provide that information. Then, again requesting different subjects and different questions, and ultimately having it come down to the timing of his decision to leave, is pretty disappointing.”

Hoffman was expected to be the starting center for the Hokies, and with Hoyt’s status up in the air, offensive line coach Vance Vice is down to redshirt freshman John Harris at the position. While Hoffman won’t play this year and will instead redshirt and have two years of eligibility remaining, he’s still making a significant impact on the team.

Fuente noted that much of the team could learn a thing or two from Hoffman and the way he’s approached the entire ordeal.

“Things didn’t go Brock’s way, and you know what he did? He showed up and he went down there and he ran the scout team, and he busted his tail doing that,” Fuente said. “He had to (weight lifts) with our developmental group. You know what he did? He led that freshman group in their developmental lift. This is a guy that doesn’t let other people determine his attitude or his effort, and I think that’s admirable, and I think we could all learn a lesson from Brock.”

The NCAA’s decision did make waves across national headlines. Scott Van Pelt used his “One Big Thing” segment on SportsCenter to soundly point out the flaws with the entire process. While it doesn’t help Hoffman in the here and now, it does potentially help another player in the future avoid going down the same disastrous path.

“Standing around and, for lack of a better term, just bitching about the problems does us no good. Finding ways to try to create solutions is the answer. There have been some good suggestions that I think merit conversation.”

In today’s day and age, breaking news can sometimes be found on Instagram stories. That was the case when running backs coach Zohn Burden posted a story at New River Valley Surgical Center asking for prayers for Jalen Holston, who was undergoing surgery. 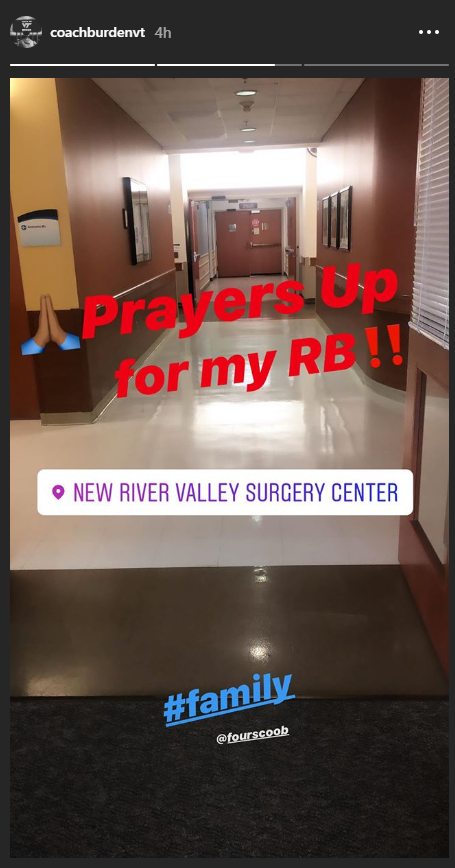 Fuente was hush-hush about any injury updates, but did comment on Holston’s undisclosed injury. Holston rushed for 15 yards on four carries before he left the game in the second quarter.

“We’ll be without Holston for a little while,” Fuente said. “I don’t know about all the rest.”

In his absence, true freshman Keshawn King could see an uptick in carries. Is he ready for an increased role?

“It’s kind of at the point where he better be,” Fuente said. “The line is getting short.”

King was the Hokies’ leading rusher on Saturday with 10 attempts for 33 yards. Players and coaches raved about his explosiveness over the course of camp, but he rarely got out in space against Boston College.

That was an area of concern for the running unit and offensive line as a whole, as Virginia Tech managed just 98 yards on the ground and 2.3 yards per carry. Those numbers will need to improve in the home opener against Old Dominion this Saturday (noon, ESPNU; buy tickets here).

Other Takeaways from Virginia Tech-Boston College

The overwhelming issue from Saturday was the five turnovers that the Hokies committed, four of which Ryan Willis was responsible for. When given a chance to look back at the turnovers after the game, Fuente was certain that Willis will learn from those mistakes and fix them in the games to come.

“Well I think they are all correctable,” Fuente said. “One, the screen, was a little bit kind of in between, kind of a tough deal, to be honest with you. If we get it over his head I think we would have gotten a big play. There are some things in there that we have to do teaching, a better job of learning, and executing. We should be able to.”

In Chestnut Hill, nine different defensive linemen earned reps throughout the contest. Four of those players were redshirt or true freshmen in Norell Pollard (who led the unit with four tackles), Jaevon Becton, Eli Adams, and Mario Kendricks, while Jaylen Griffin (a redshirt sophomore) transitioned from linebacker to defensive end this year.

“I think they played like what they are: which is really talented, young players,” Fuente said. “Certainly there’s room for improvement. I think we saw flashes of them doing what we think they can do, particularly the inside guys. I’m excited about that, what they can be. We don’t have time to put them on the shelf and let them marinate, though. They’re going to have to get out there and get ready to go.”