The Virginia Tech softball team heads to Lexington this weekend to play in their first NCAA tournament since 2015. They are the #2 seed in a region which includes the hosting Kentucky Wildcats (#14 overall seed), Illinois (RPI #41), and Toledo (RPI #114), surprise tournament winners of the Mid-American Conference.

The Hokies are coming off a disappointing ACC tournament, where they were the top seed but were upset in their first game by the 8th seeded NC State Wolfpack. However, the NCAAs are double elimination, which is a more forgiving format and “usually” lends itself more to the best team winning (don’t tell that to the MAC teams, however).

The Hokies will open play Friday at noon against Illinois. All games will be available online on ESPN3. Here’s a look at the bracket. 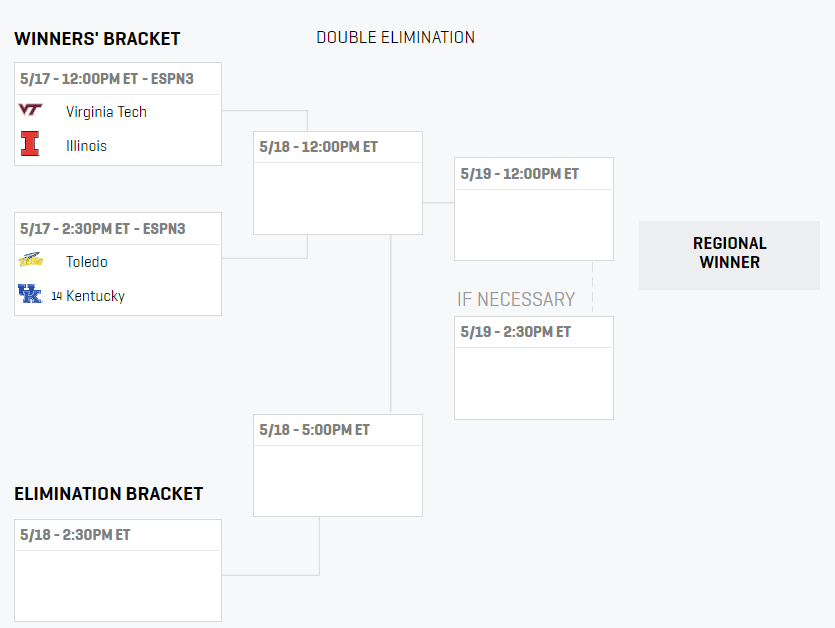 Here’s a look at the four teams in Lexington. A comparison of team and individual stats are located at the bottom of this article.

Kentucky finished the year 33-22 (14-10 in the SEC), but 13 of those losses were to teams ranked in the Top 20 of the RPI. For the second consecutive season, the Wildcats finished their regular season with the toughest schedule in the country. In fact, UK played 42 of their 55 games against teams that ended up making the NCAA Tournament.

Coach Rachel Lawson is in her 12th year at Kentucky and has taken the Wildcats from mediocrity to a perennial power. This will be their 11th consecutive NCAA Tournament, and they have made the Super Regionals 6 times in the last 10 years, being eliminated the last two years by Oregon. They have been a first round host the last 4 seasons. After being eliminated in 5 games in 2016, they have gone 6-0 the last two seasons in first-round games, including 3 run-rule wins last year.

The Wildcats play in a state of the art, $9.5 million facility, John Cropp Stadium, with a seating capacity of 1,500 plus. They are 31-11 at home over the last two seasons with only one of those losses being to a team outside the SEC. I think it’s safe to assume they will have a significant home field advantage.

Traditionally, the Wildcats have been carried by their pitching (Lawson doubles as pitching coach), but this year it’s been the offense that is nationally ranked, with the Wildcats ranking 11th in the country in runs scored (6.45). They have been held to two or fewer runs just 10 times.

The Wildcats are led by SEC Player of the Year Abbey Cheek, who is hitting .448 with 20 home runs and 63 RBIs. Combined with drawing 63 walks, Cheek has an on-base percentage of .629, second in the country by only .001 point. Cheek leads the country in slugging percentage at .978. As a point of reference, Kelsey Bennett leads the Hokies in slugging percentage at .757, which is 48th in the country. Cheek is a VERY dangerous player and will usually bat third in the lineup.

The Wildcats have five other hitters who are hitting over .300, including senior shortstop Katie Reed (.367), who typically bats second, and freshman center fielder Kayla Kowalik (.359), both of whom have stolen 14 bases this year. Interestingly, the Wildcats leadoff hitter is their catcher, senior Jenny Schaper (.318), who has started over 200 games in her Kentucky career. She was named First Team All-SEC this season and has handled over 1,250 chances in her career with only 11 errors – that’s a fielding percentage of .991, which is outstanding.

In the circle, sophomore Grace Baalamn (9-9, 3.61 ERA) and junior Autumn Humes (13-10, 4.23 ERA) have each started 20 games for the Wildcats this season, with Baalamn throwing two complete game shutouts against #14 Auburn. However, Baalamn last pitched on May 4th against Texas Tech and freshman Meghan Schorman (5-2, 4.74 ERA) has gotten two of her eight starts since then.

Illinois (32-23) received an at-large bid to the tournament after falling to #1 seed Michigan 1-0 in 8 innings in the Big 10 tournament last week. They finished 9th in the regular season in the Big 10 with a 10-15 Conference record. Prior to the Big 10 tournament, they were on a five-game winning streak. They have played 13 teams in the Top 25 of the RPI, but have registered only 3 wins: 4-3 over #9 Minnesota, 7-4 over #14 Oklahoma State, and 6-5 on opening day against #16 Kentucky (the regional host).

Illinois is in the Top 20 of the NCAA in batting average at .317 and they average 5.8 runs per game. Their first five batters are all hitting over .345, led by All Big 10 First Team selection, sophomore Bella Loyd (.389, 12 home runs), who interestingly bats fifth.

The Illini don’t run a lot – they have a total of 46 stolen bases this season. Sherlund leads the team with 11 (in 13 attempts). Defensively, the Illini have made the most errors of the 4 teams in the regional with 73, as compared with 42 for the Hokies.

The Toledo Rockets are the fourth team in the Kentucky Regional. They earned their spot the hard way, winning 6 games over 4 days in the MAC tournament, coming back through the losers’ bracket to win 5 consecutive games, including THREE games on Saturday. This will be their first NCAA tournament appearance since 1992.

The Rockets finished 29-26 overall and 7th in the MAC with a 16-10 conference record. This is Toledo’s second consecutive season with a winning record after having gone 21 straight years with losing marks. By playing in the MAC, their schedule hasn’t been overly taxing as they have played only 7 teams with a Top 50 RPI, losing all of them. Their best wins are three games over #70 RPI Kent State.

The Hokies just completed one of the best seasons in school history, but that has been dampened by the first round upset in the ACC Tournament last week. The Hokies head to Lexington looking to atone for a bad day at the office.

One thing in their favor should be the double elimination format, as the Hokies’ one advantage in this Regional appears to be their pitching. They have one of the best 1-2 punches in the country, and are the only team in the country to have two twenty game winners in Keely Rochard (20-3, 1.70 ERA) and Carrie Eberle (25-6, 1.73 ERA).

Coach Pete D’Amour said Wednesday that since their strengths are different, matchups and scouting reports would determine who would start each game in the circle. He pointed out that Carrie is more of a speed and ground ball pitcher, while Keely is more off-speed and a fly ball pitcher.

All year, the Hokies have been the hitting the ball well and they’ll need to continue if they plan to advance out of this Regional. The Hokies currently rank fourth in the country in HRs per game (1.70), fifth in scoring (7.07 runs/game) and sixth in batting average (.338). This will be some of the better pitching that the Hokies have faced this season, but statistically, the opponents don’t appear to be dominating.

The Hokies are led by senior Emma Strouth (.412, 12 HRs), who set a new Virginia Tech RBI (66) record this year, and sophomore Darby Trull (.405). The Hokies have 5 more players hitting over .300, including senior Caitlyn Nolan (.310), who set a school HR record (18). Like the Wildcats, the Hokies have 4 players who have hit 11 or more HRs this season, but up and down the lineup, they have a few more deep ball threats.

Sunday night, I felt really good about the Hokies’ assignment to the Kentucky Regional. Playing at the #13 seed when there are only 16 National seeds is not a bad placement. But after spending time looking at Kentucky and Illinois, my optimism has waned just a bit. Don’t misunderstand me – the Hokies absolutely have a shot to advance, but they will have to play very well. Kentucky Coach Lawson has called this Regional “one of the toughest in the country” and I think that’s a fair assessment.

I also worry a bit about the Hokies’ youth. The ACC Tournament lineup consisted of 4 freshmen and 3 sophomores, and those are players that haven’t seen the post-season spotlight. Strouth and Nolan are outstanding seniors, but they are only two players and the competition has a lot more experience.

The Massey Ratings system has the Hokies beating Illinois 6-4 in the opening round, and that seems reasonable to me, though it’s far from a sure thing. Kentucky will be a huge challenge as they are battle hardened, they are experienced, and they are playing at home. They’re a national seed for a reason.

In addition, the NCAA softball tournament isn’t called “May Madness” for good reason. During the last two seasons, there have been ZERO lower seeds advancing over the 16 national seeds. In 2016, there were two: Utah upset #9 Kentucky and Arizona beat #13 Tennessee.

But the Hokies have surprised all year – why not once more? They have played pretty well on the road and have a similar “business trip” approach to the successful Hokie football teams of the past. They have the pitching, they have the hitting, and their fielding is usually solid. Anything is possible.

It’s exciting just to be in this situation. Good luck to the Hokies!

A Statistical Look at the Regional 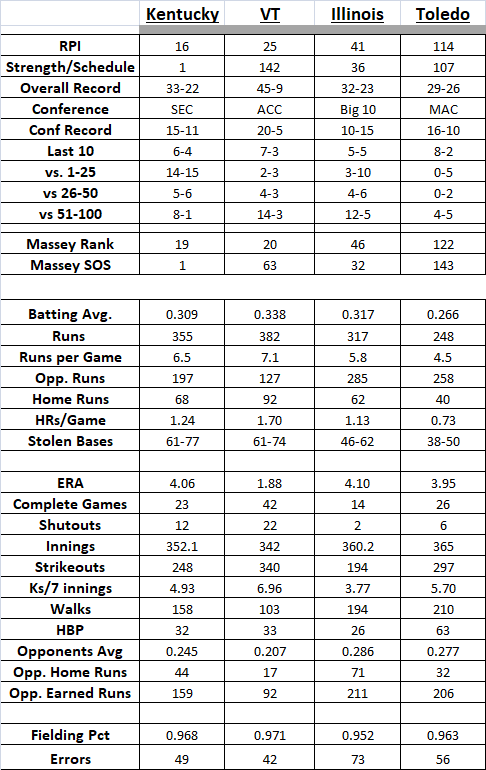 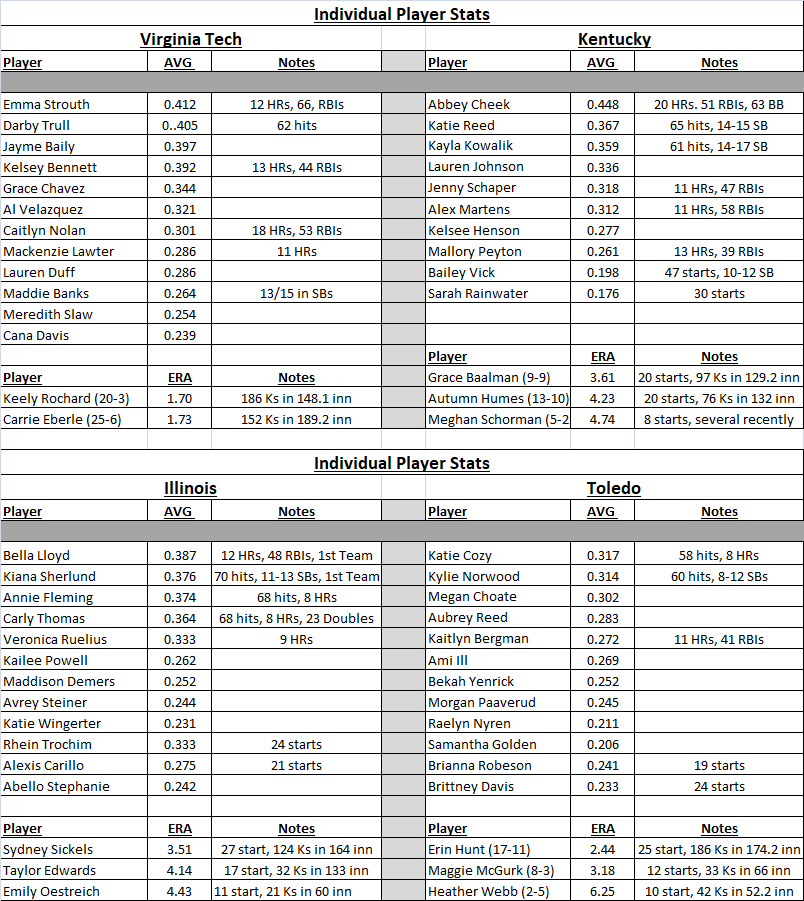