Virginia Tech’s 2019 ACC Tournament will begin on Wednesday afternoon at approximately 2:30pm when they take on No. 12 seed Miami in Charlotte.  The Hokies (23-7, 12-6) are the No. 5 seed, and they’ve already defeated the Hurricanes (14-17, 5-13) twice this season, including Friday night in the regular season finale in Cassell Coliseum.

Before we get into the primer, here’s a look at the ACC Tournament bracket… 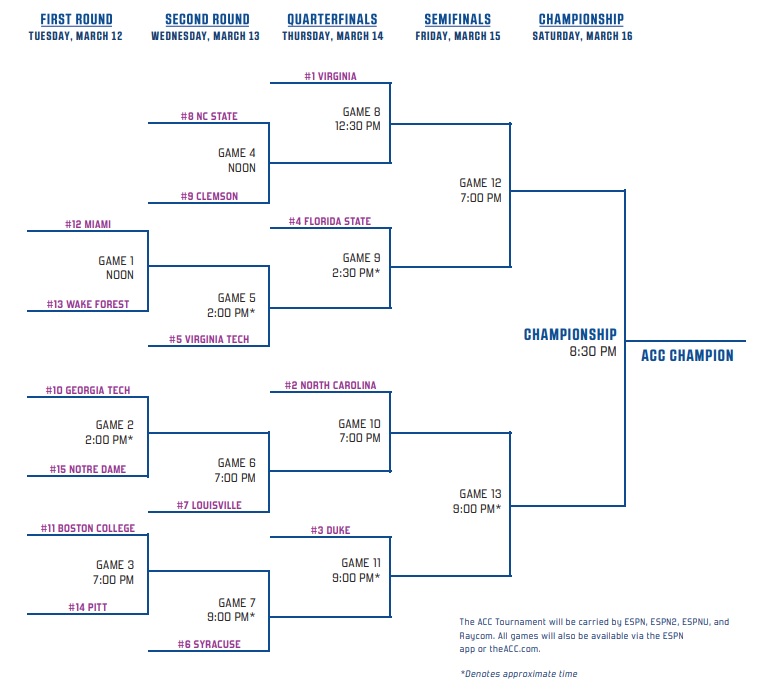 Tech first faced Miami back on January 30, when they defeated the ‘Canes 82-70 on the road.  That was the game in which Justin Robinson suffered his foot injury from which he’s yet to return.  The Hokies led that game by as many as 21 points.  They beat Miami 84-70 in Cassell Coliseum this past weekend, and again they led by as many as 21 points.  Neither meeting was quite as close as the final score indicated.

Here are Virginia Tech’s combined numbers from both meetings…

The Hokies shot the lights out against a Miami team that has been porous defensively all season, and the Hurricanes just couldn’t keep up.  Here are their numbers in the two meetings…

Virginia Tech’s ability to impose their will in the halfcourt against Miami was impressive.  The Hokies denied Miami the ball in the paint and forced the Hurricanes into a 3-point competition for which they aren’t suited.  Tech made five more three-pointers during those two games despite taking 17 fewer attempts.

As a reminder, Miami is No. 14 out of 15 ACC teams in defensive efficiency in conference games, No. 14 in effective field goal defense, No. 14 in three-point defense, and No. 14 in two-point defense.  It doesn’t get much worse than the ‘Canes have been on the defensive end of the court.  For a little more detailed view of Miami, see our game preview from last week.

If the Hokies can avoid an upset against the Hurricanes, they’ll get another rematch from last week, this time against No. 4 seed Florida State (25-6, 13-5) on Thursday at approximately 2:30pm. To familiarize yourself with FSU’s roster, here’s our game preview from last Tuesday.

Leonard Hamilton has a big, deep, senior-laden team, and his style of play and team composition has given the Hokies plenty of trouble in recent years.  Here are the most recent meetings between the two schools…

Florida State’s advantage may be even greater in this game.  Leonard Hamilton plays 11 players, while Buzz Williams doesn’t have much depth, and the Hokies will have already played the day before.  The pessimist would say that the Hokies don’t have much of a chance due to those facts, and their recent record against the Seminoles.

However, the optimist would say that Tech beat FSU twice in 2015-16, including a 96-85 victory in the ACC Tournament, and that after four straight victories over Tech the Seminoles are due for a loss.  Both arguments have some merit.  Florida State is a tough matchup, but it’s also very hard to keep beating the same team over and over again, especially if that team is good.

The ‘Noles may be a tough matchup, but once you reach that stage of the ACC Tournament, any opponent you face is going to be tough.  If the Hokies do manage to make it past both Miami and Florida State, they’ll have to take on No. 1 UVA, No. 8 NC State or No. 9 Clemson in the semifinals at 7pm on Friday night.  That would be yet another tough game.  If Tech manages to make it past the quarterfinals, we’ll circle back around and discuss their semifinal matchup in greater detail.