The 2019 ACC Wrestling Championship is this Saturday in Blacksburg, and Virginia Tech is aiming for something that hasn’t been done in 20 years: three ACC championships in a row.

From 1997-2000, North Carolina won four straight championships, but no other school has won more than two in a row since then. The Hokies have won the last two (2017 and 2018) and four out of the last six (including wins in 2013 and 2014), but they’ll have to fight off some stout competition, particularly from North Carolina State, to win their third in a row.

Tickets: $10 (buy tickets here), free for kids 18 and under (students free with ID 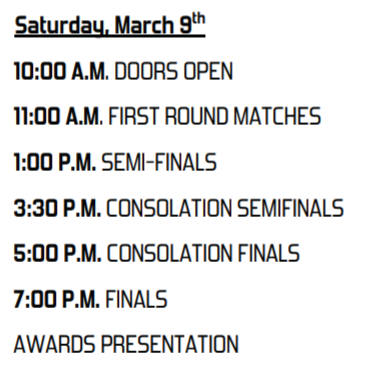 Structure of the Tournament

Here’s how the tournament works: There are ten weight classes, and each of the ACC’s six schools gets one entry per weight class (60 wrestlers total).

Wrestlers in each weight class are seeded 1-6. Interesting note: the seeding was done by the ACC coaches.

As an example, here’s the 165-pound bracket, where Virginia Tech’s Mekhi Lewis is the No. 1 seed: 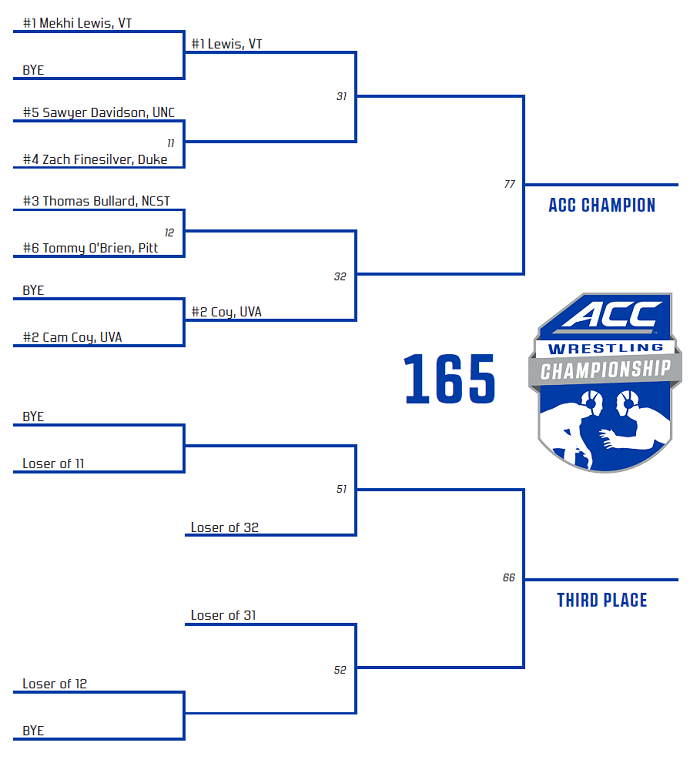 In the first round, seeds 4 and 5 wrestle, and seeds 3 and 6 wrestle. The winners advance to the semi-finals to face seeds 1 and 2 respectively. The losers drop down into a consolation bracket.

There will be two mats on the Cassell Coliseum floor, with matches going on simultaneously. There will be a total of 81 matches on the day, and that determines the order in which the matches will occur. In the 165-pound weight class example above, the round 1 matches are 11 and 12 in the 11 AM session, with the semi-finals occurring as matches 31 and 32 in the 1 PM session. The 165-pound final will be match No. 71, and it will happen during the 7 PM session.

Here’s the entire bracket in PDF form, with all 81 matches listed.

Here’s where the Hokie wrestlers are seeded for the 2019 ACC Wrestling Championship:

In the ten weight classes, Virginia Tech has three No. 1 seeds, more than any other school. Here are the No. 1 seeds:

Here’s a table showing all seeds in all weight classes, by school.

The Hokies have five wrestlers seeded No. 1 or No. 2, more than any other school.

We won’t get into the intricacies of scoring in this preview, but based solely on seeding, the Hokies are the tournament favorites.

If there are no upsets and no major decisions or falls/pins (which lead to extra points), the final scoring would be (per “nvpbrown” on our Wrestling Message Board):

For nvpbrown’s full breakdown of scoring, see this post on the wrestling board. Note that we don’t vouch for the correctness of the data in the post (and there’s more discussion later in that thread), but if you’re a novice, the post is a good general guide to how scoring works.

The key for any team is to avoid upsets, wrestle to your seed, and try to pull off an upset or score bonus points (via major decision, tech fall, or fall/pin) along the way.

NCAA Tournament Berths Up for Grabs

In an interesting wrinkle that adds excitement to the affair, some wrestlers in each weight class will automatically qualify for the upcoming NCAA Wrestling Championships, based on where they finish in the weight class.

For example, the top four wrestlers in the 133-pound class will receive automatic NCAA bids. So, though Virginia Tech’s Korbin Myers is “only” seeded fourth in that class out of six wrestlers, he needs to wrestle to his seeding in order to earn the automatic NCAA bid.

The NCAA will hand out at-large bids to round out the field, but much like in NCAA basketball, it’s best to just qualify automatically, and not leave it up to a committee to decide your fate.

Here’s a table showing the number of NCAA auto-bids per ACC weight class, and the seeding of the VT wrestler in that weight class:

We’ll see you Saturday in Cassell Coliseum! If you’re not going to be there, remember to use the WatchESPN links for Mat 1 and Mat 2 to follow the action, and check out the discussion our Wrestling Message Board.