Tonight’s Virginia-Virginia Tech men’s basketball game is the biggest in the history of the rivalry.  With both teams ranked firmly in the top 10 and shooting for high NCAA Tournament seeding, there is a lot on the line from a national perspective.

There is also a lot on the line from an ACC perspective.  Duke suffered a shocking 95-91 home loss to Syracuse on Monday night…the same Syracuse team who was blown out in the Carrier Dome 73-59 by Georgia Tech over the weekend.  That gave the Blue Devils their first ACC loss of the season, and it sets up tonight’s game to be a battle for the pole position in the ACC. 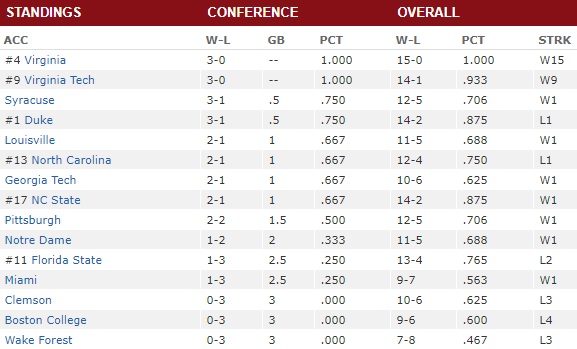 Virginia fans knew they were going to be great yet again this year, and Virginia Tech fans knew the Hokies had a chance to be very good, but probably neither fanbase expected this to be a battle of top 10 teams.

The Hoos and Hokies come into this game ranked No. 1 and No. 7 respectively in the Coaches Poll, and that’s exactly where Ken Pomeroy’s advanced metrics have each club pegged as well.  The teams are similar statistically in a number of ways.

And here’s how the Hokies match up defensively…

Everyone knows that UVA has been one of the best defensive teams in the country under coach Tony Bennett, and that’s no different this year.  The Hokies will have their hands full on that end of the court.

The Hoos don’t force a lot of turnovers, but they make it extremely difficult to get good shots, and they don’t allow very many offensive rebounds.  Tech’s offensive numbers are as follows…

Virginia Tech is a great shooting team, despite their performance last week against Georgia Tech, and they are better at offensive rebounding than most people give them credit for.  Their one blemish this season is that they are turning the ball over at a higher rate, which is something they can’t afford to do against UVA.

The Hokies didn’t exactly light the world on fire offensively in their win at UVA last year, scoring 61 points.  However, they did two things effectively: they knocked down a pretty high percentage of their three-pointers (11-of-29 for 37.9%), and they only had 10 turnovers.  Meanwhile, the Hoos were 11-of-38 (28.9%) from the outside, as they struggled to get the ball in the paint against Tech.  It didn’t matter that UVA only committed four turnovers, because their halfcourt offense struggled. Ty Jerome and Kyle Guy combined to go 9-of-35 (4-of-24 from three).

Virginia appears to be a better offensive basketball team than they were a year ago.  Under Tony Bennett, the Hoos are generally viewed as a system program, and that system sometimes means the average fan doesn’t appreciate the talent UVA is putting on the court.  However, forward De’Andre Hunter is a projected first round pick, and some mock drafts have point guard Ty Jerome sneaking into the late first round as well.  Both of those guys are better players than their numbers indicate, but the average fan doesn’t realize it because of UVA’s system.

With Virginia Tech’s Nickeil Alexander-Walker thrown into the mix (I’ve seen him projected as high as No. 6 overall in the 2019 Draft), there will potentially be three first round picks on the court in tonight’s game.  The rivalry hasn’t seen that type of talent on the court at the same time since 1982-83, when Dell Curry played for the Hokies and the Hoos had Ralph Sampson.

Despite their status as potential first round picks, neither Jerome nor Hunter lead UVA in scoring.

How Virginia Tech chooses to match up defensively with UVA will be interesting.  The Hokies have used different starting lineups this season.  Recently senior forward Ty Outlaw and sophomore guard Wabissa Bede have been flip-flopping in and out of the starting lineup.  Will Buzz Williams elect to start Outlaw for offense, or will he start Bede and use him to defend either Guy or Jerome?  We’ll find out.

Virginia is currently an 8.5-point favorite in tonight’s game.

Justin Robinson has 529 career assists.  The Virginia Tech record of 547 is held by Bimbo Coles.