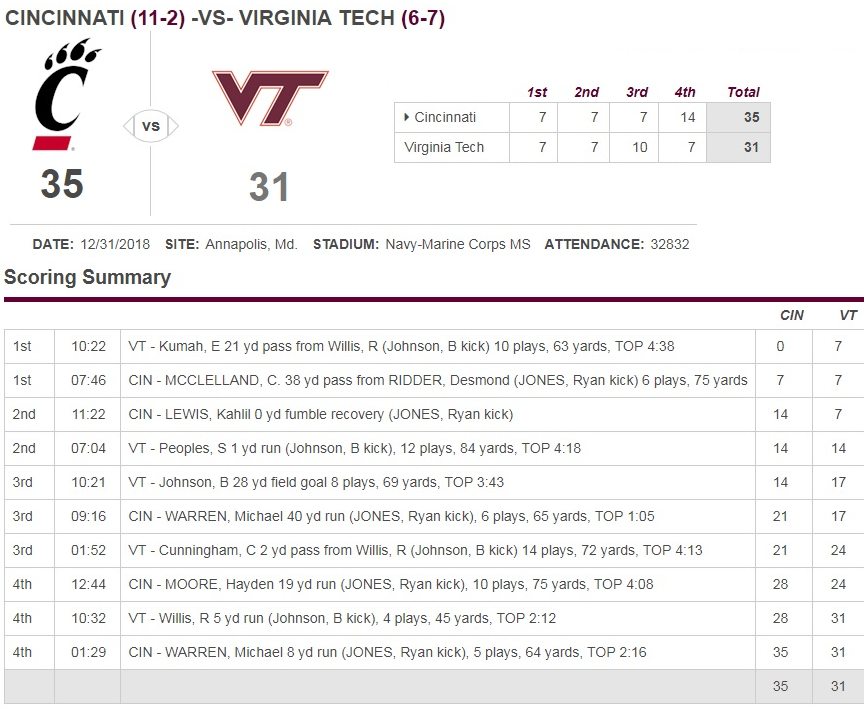 ANNAPOLIS, Md. — The Military Bowl unfolded for Virginia Tech much like the entirety of its 2018 football season. The Hokies battled through injuries and adversity, showed much resolve in putting themselves in position to finish strong, only to come away disappointed in the end.

Tech had a shot at breaking open the game in the fourth quarter before failing to convert a prime scoring opportunity.  It was one of many missed chances for a depleted Tech team in a 35-31 loss to Cincinnati in front of an announced crowd of 32,832 rain-soaked fans Monday at Navy-Marine Corps Memorial Stadium.

“I’m awfully proud of this group. They stood tall when other people ran. They were selfless when other people were selfish. They’ve been through a lot and worked their tails off to get us to this point,” Tech coach Justin Fuente said.

“They have a lot to be proud of. I think they played their tails off out there. It certainly wasn’t a situation because we weren’t prepared or didn’t want to play or anything like that. I apologized to them for us not finding a way to send the seniors off the right way. I also let them know the guys that are coming back did a fantastic job of sticking together through tough times, but if we go through another 365 days of what we went through in the past 365 days, it’s going to be really difficult. We have to find a way to move forward as a program and do things quite a bit better.”

Tech salvaged its season with wins over Virginia (to continue its 15-year win streak) and Marshall to become bowl eligible for the 26th consecutive season, but it couldn’t cap it all off with one last victory to secure a winning season.

The Hokies (6-7) finished with a losing record for the first time since 1992, the year before the bowl streak began under Frank Beamer.  The Bearcats finished 11-2.

“I’d say it’s all three of those things – It stings, it’s angry and it’s disappointing,” Tech defensive coordinator Bud Foster said. “It’s been a long time, and I’m really proud of the consistency that we [have had] and how we have played over the years. Obviously, we’re not satisfied. Even if we were 7-6, we wouldn’t be satisfied. We’d feel happy because we won the game, but we wouldn’t be satisfied. We’ve been pleased to finish the way we did, and I’m still pleased with how we finished.

“I think we have a young group of men that some of them have to…they need to realize what it takes to perform and play at this level and in all aspects and to be consistently good in all aspects. And that’s really what we’re going to roll up our sleeves and work towards.”

It was a season characterized by attrition for the Hokies, particularly on the injury front. It was much of the same in the final game of the season, as Tech suffered a rash of injuries in a contest that came down to the wire.

That group included Tech’s best defensive player, senior tackle Ricky Walker (missed the second half with hamstring injury), tailbacks Steven Peoples and Deshawn McClease and cornerback Jovonn Quillen (who started in place of Caleb Farley). All of them were sidelined at the end.

Willis’ attempt to lead the Hokies to a comeback victory in the closing minutes was thwarted by Cincinnati’s defense. Two plays after having an interception negated by a defensive pass interference penalty, Willis was picked off by Bearcats safety James Wiggins to seal the outcome.

It was the second costly turnover of the game for Willis, who fumbled earlier in the fourth quarter at the Cincinnati 3-yard line.

The Hokies gained favorable field position following an interception and return by linebacker Dylan Rivers to the Cincinnati 12-yard line. Facing fourth-and-1 with a 31-28 lead, Fuente elected to go for it. Willis lost the ball and Tech came away empty handed.

“It was a little power play-action and the two nose tackles, they submarined Chung at center and I got stumbled up on my back and I went back to throw and the ball just slipped out of my hands,” Willis said. “It was soaked. It happens. I’ll be better.”

The Hokies clung to that lead late in the fourth quarter when the Bearcats marched down the field to little resistance in scoring the go-ahead points. Cincinnati broke runs of 31, 3, 10 and 12 yards to set up an 8-yard scoring run by sophomore tailback Michael Warren II with 2:16 remaining. It was the seventh and final lead change of the game, which was a Military Bowl record.

Warren finished with a career-high 166 yards and two touchdowns on 20 carries.

“The kids played hard. We gave up a couple of plays. That’s the nature of the game these days, and a group that’s fought their tail off. We were shorthanded tonight. You lose Ricky Walker early. We just needed his discipline and toughness inside there at the end,” Foster said.

Turnovers have been the culprit in all of Tech’s losses this year. The Hokies went 0-6 this year when losing the turnover battle.

While Cincinnati capitalized on Tech’s mistakes, the Hokies couldn’t make the Bearcats pay for their gaffes. Cincinnati recovered all three of its fumbles, including one in the end zone for a touchdown in the second quarter.

“The first fumble was just sitting there for like five seconds. We definitely should have had that. And I just feel like we’ve got to take advantage of those plays,” defensive end Emmanuel Belmar said. “I feel like throughout the whole season, we missed those types of opportunities.”

Tech gained 443 total yards and rushed for 224 yards on 45 attempts (5.0 per carry average). But the Hokies defense, without Walker for the entire second half, couldn’t slow down the prolific Cincinnati attack.

Despite losing starting quarterback Desmond Ridder to an ankle injury in the first quarter, the Bearcats still piled up 462 total yards. Backup quarterback Hayden Moore rushed for 64 yards and a touchdown.

Tech also dealt with injuries to critical offensive playmakers, including Peoples and McClease. Peoples scored a touchdown in the second quarter before being sidelined. McClease finished with 102 yards on 13 carries before leaving with an injury.

With Peoples and McClease hurt, Jalen Holston filled in with 40 yards on 10 carries.

Even in a loss, the Hokies coaches were proud of the fight they saw in their players.

“I have seen a lot of growth, but at the same time it’s been inch by inch rather than leaps and bounds. As coaches, you always want to be better sooner than later,” Foster said. “But the one thing this group of kids did is they fought hard to get us to this position. When everybody was counting us out and writing us off, we persevered and hung in there. We won two games against two really good football teams (Virginia and Marshall) and had an opportunity to play a good football team today and had an opportunity to win the game, but came up a little bit short.”

“We just didn’t have enough firepower in the end this year as far as leadership, as far as experience ahead of guys,” Foster added. “We kind of had to throw them to the wolves so to speak. I saw improvement, and I hope the group that we have, this will create an edge in our work and our preparation this offseason. I hope we’ll train agitated and train with a purpose.” 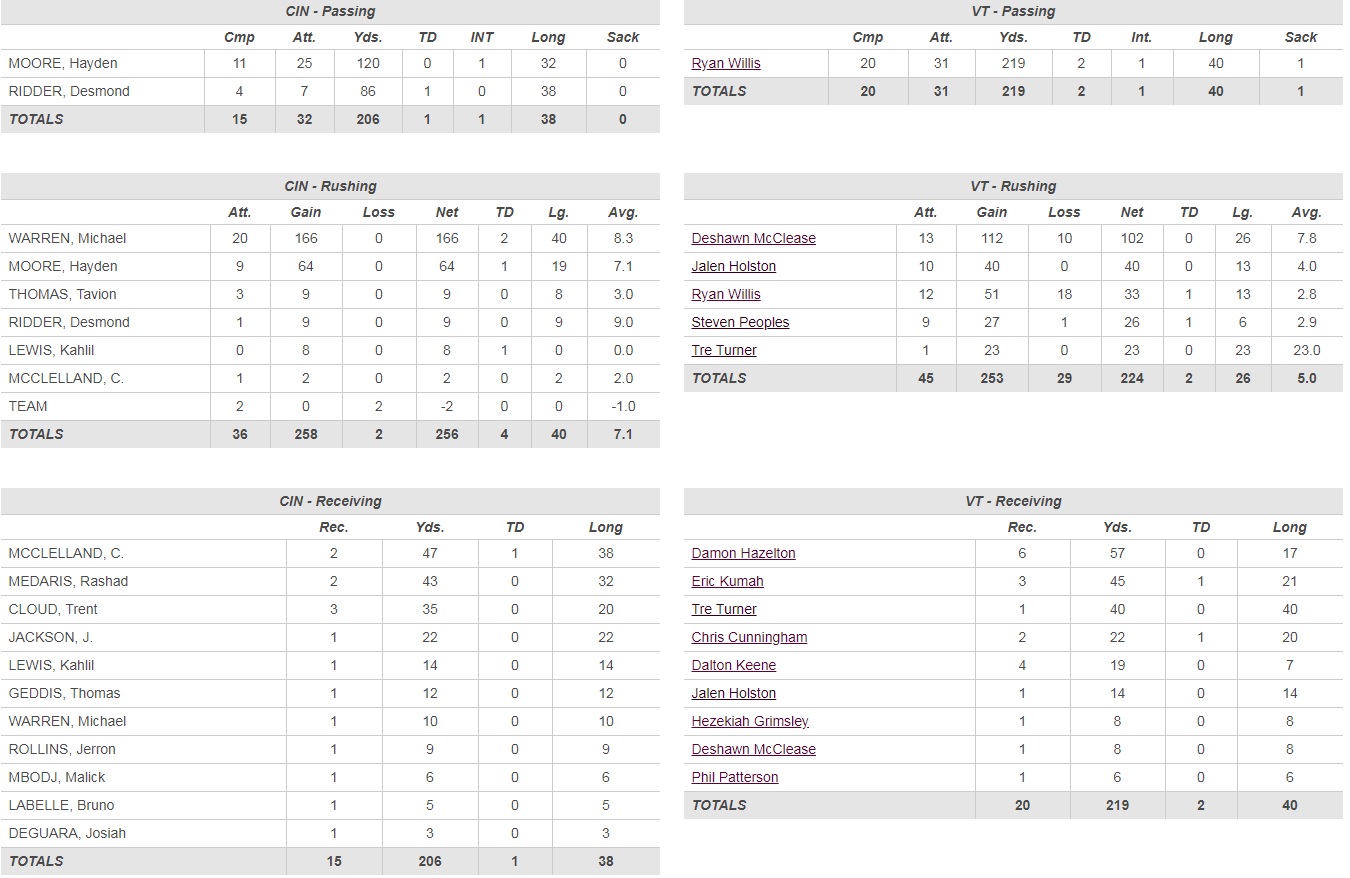