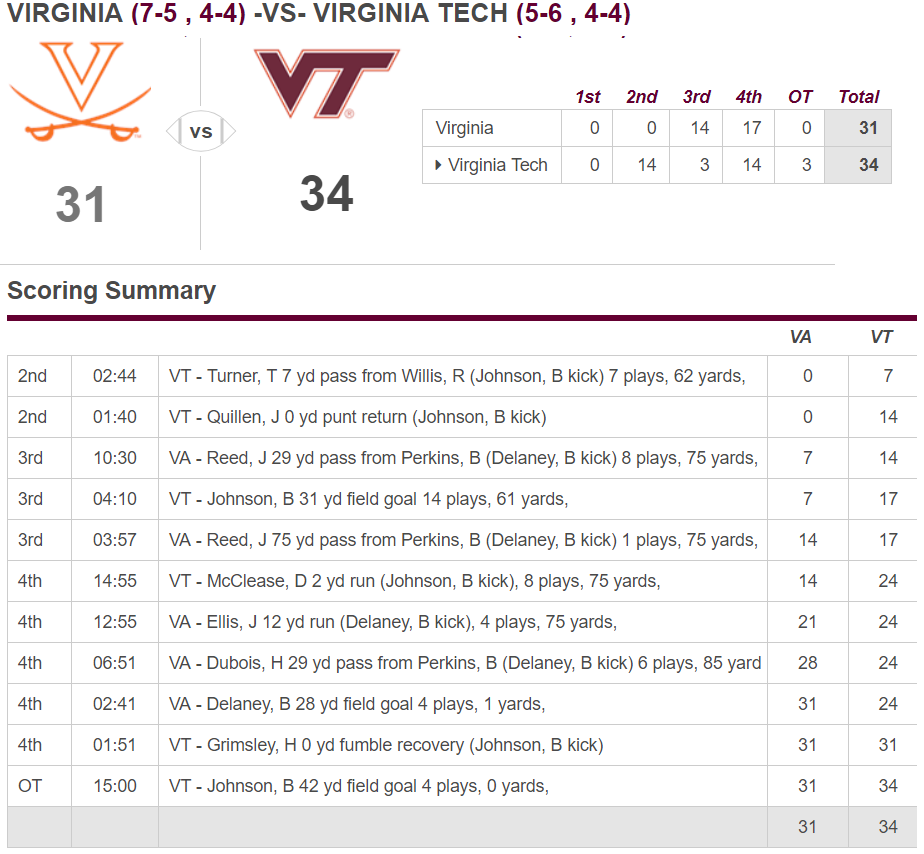 Some of it defies description. Virginia (7-5, 4-4 ACC) had Virginia Tech (5-6, 4-4 ACC) all but wrapped up, but couldn’t put it away. Through a desperation catch, a ball that bounced the right way, and a simple matter of being in the right place at the right time, the Hokies prevailed over their biggest rival 34-31 in overtime.

“15 years in a row,” senior defensive tackle Ricky Walker said. “That’s all I can say.”

“It was a miracle to me,” cornerback Jovonn Quillen said.

Short on words, but that accurately describes how most of the Virginia Tech faithful felt. During a year where the Hokies have been historically bad on multiple occasions, they still found a way to extend their decade and a half old streak against Virginia.

“It’s indicative of what we see on a daily basis from our guys,” head coach Justin Fuente said. “We know it’s there. We see them come to practice daily, and how they work in the weight room. You just want your kids so desperately when they’re putting all that work in to have some success.”

For a season that’s featured so many disappointments, to say the win was much-needed would be an understatement.

“I told those guys that I love them,” Fuente said. “I wouldn’t say it if I didn’t mean it.”

“I don’t know if my heart could handle that anymore, what we did today,” defensive coordinator Bud Foster said.

Trailing 31-24 with 2:41 remaining, Virginia Tech needed to drive 75 yards to tie the game. Facing a third-and-10, Ryan Willis heaved a pass deep to Dalton Keene. On a team where you would expect any of the big body receivers to make a catch on a 50-50 ball, it was actually the tight end Keene who snagged the pass for 45 yards, ripping it away from the defender as the two players fell to the ground. 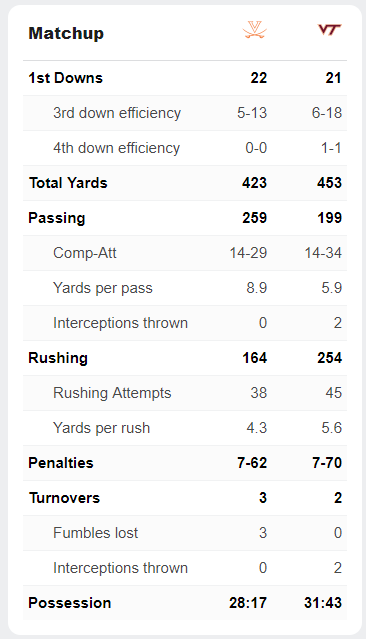 “We were not in desperation mode on Keene’s catch, but it was getting there quickly,” Fuente said. “Ryan just bought some time. I don’t know what he saw, I just know he threw that ball up there, and Dalton making that catch is indicative of the type of person Dalton is.”

Following an 11-yard completion to Tre Turner down to the Virginia 19, Steven Peoples hit a hole up the middle, and he seemed destined for the goal line. That was until Virginia safety Joey Blount lowered his head on the football and forced a fumble at the 6-yard line that squirted into the end zone. The ball was lying there, waiting to be recovered by a Cavaliers player to essentially end the game. All hopes of extending the streak were gone in that moment. Instead, Brenton Nelson couldn’t field it cleanly, and the Hokies’ Hezekiah Grimsley jumped on the football just before it went out of the back of the end zone. Tie game, 31-31 with under two minutes to play.

“Coach Wiggins always says to never give up on the play,” Grimsley said. “Me being there, that was just me playing football.”

In 100 meetings of the Commonwealth Clash, it was the first ever overtime affair between the two sides. Virginia Tech got the ball first and immediately threw two incompletions. On third down, Willis rolled out right, and Virginia’s Charles Snowden had him dead to rights for a huge loss, likely knocking the Hokies out of field goal range.

Instead, Willis avoided the would-be tackler, and he had to chuck a pass far enough past the line of scrimmage and into the stands to throw it away.

“I thought I was going to get around him, and he latched on to me,” Willis said. “I did everything I could to stand up and get the ball thrown away. I was like 20 yards behind the third down. I had to actually heave it.”

Disaster avoided. Brian Johnson connected on the 42-yard field goal, his first make from 40+ yards since the Notre Dame game, to give Virginia Tech the three-point advantage. Willis wound up 14-of-33 for 199 yards, one touchdown and two interceptions.

Bryce Perkins and the Cavaliers offense took the field, needing just 25 yards to end the streak. Perkins connected with Hasise Dubois, whose earlier touchdown gave Virginia its first lead of the game in the fourth quarter at 28-24, for 11 yards to the Tech 14.

Virginia Tech had avoided disaster on the previous possession, but this time disaster found its home with the Cavaliers, after Perkins and tailback Jordan Ellis mishandled an exchange and fumbled. Emmanuel Belmar jumped on the loose ball, and the Hokies erupted in the wake of the game-sealing, streak-sealing recovery.

“It’s crazy because I called it,” Walker said. “I said if we get a turnover we win the game.”

“It’s fitting that Belmar recovered it,” Fuente said. “Belmar has been beat up, shows up and practices every day. He got carted off once. He’s playing on one leg out there, and that’s what this team is about.”

For the seniors on Senior Day, it was an emotional ending to an unbelievable game. Walker certainly impressed scouts with a proverbial 4.4 full-out sprint to midfield to celebrate with his teammates. The players basked in the glory of the win, taking sips from the Commonwealth Cup.

“This was definitely the best game playing against these guys in my career,” Walker said. “Just blow after blow. They make a play, we make a play. Guys didn’t quit.”

Virginia had more than its fair share of chances to win the game. Trailing 28-24, Willis threw his second interception of the game to Charles Snowden, giving the Cavaliers the ball at the Hokies’ 11-yard line with 3:42 left. Virginia had scored a touchdown on every possession in the second half up to that point, but could only muster one yard before hitting a 28-yard field goal to go up 31-24, setting the stage for Virginia Tech’s game-tying march down the field.

In the first half, Tre Turner was a “one-man band” as described by Fuente. Turner corralled a one-handed 7-yard touchdown to put the Hokies up 7-0 in the second quarter.

“I just knew the ball was coming to me,” Turner said. “Coach tells us, ‘If the ball is in the air, it’s yours.’ I just found a way to bring it down.”

Turner then followed with a blocked punt that was recovered by Quillen for a touchdown with 1:40 to go in the half, staking the Hokies to a 14-0 lead.

Virginia Tech had a chance to add more to the lead when Virginia’s Chuck Davis muffed a punt, and the Hokies recovered at the Virginia 31 yard line with eight seconds left. Seeking to position the ball for a field goal, the Hokies threw a sideline pass, but Virginia’s Tim Harris picked it off at the UVA 28 and raced up the sideline. Ryan Willis gave chase and tackled Harris at the Virginia Tech ten-yard line as the clock expired, avoiding disaster for the Hokies.

“That fact that he [Willis] got him on the ground, and we got to go to the half, and that wasn’t seven points was pretty big,” Fuente said.

It was a different story in the second half. Perkins and the Virginia offense began to click on all cylinders. After only passing for 34 yards in the first half, Perkins found Joe Reed for two long touchdowns, and the eventual go-ahead touchdown to Dubois with 6:51 remaining. Perkins finished 14-of-29 for 259 yards, three touchdowns, and 112 more yards on the ground.

Virginia Tech finally got its rushing attack rolling full-steam ahead. The Hokies put up 254 yards on 45 carries. Peoples gashed Virginia for 96 yards, and Deshawn McClease added 44 yards and a touchdown.

With the win, Virginia Tech will face Marshall on Saturday, December 1 at noon in Lane Stadium in the hopes of keeping alive its 25-year bowl streak. 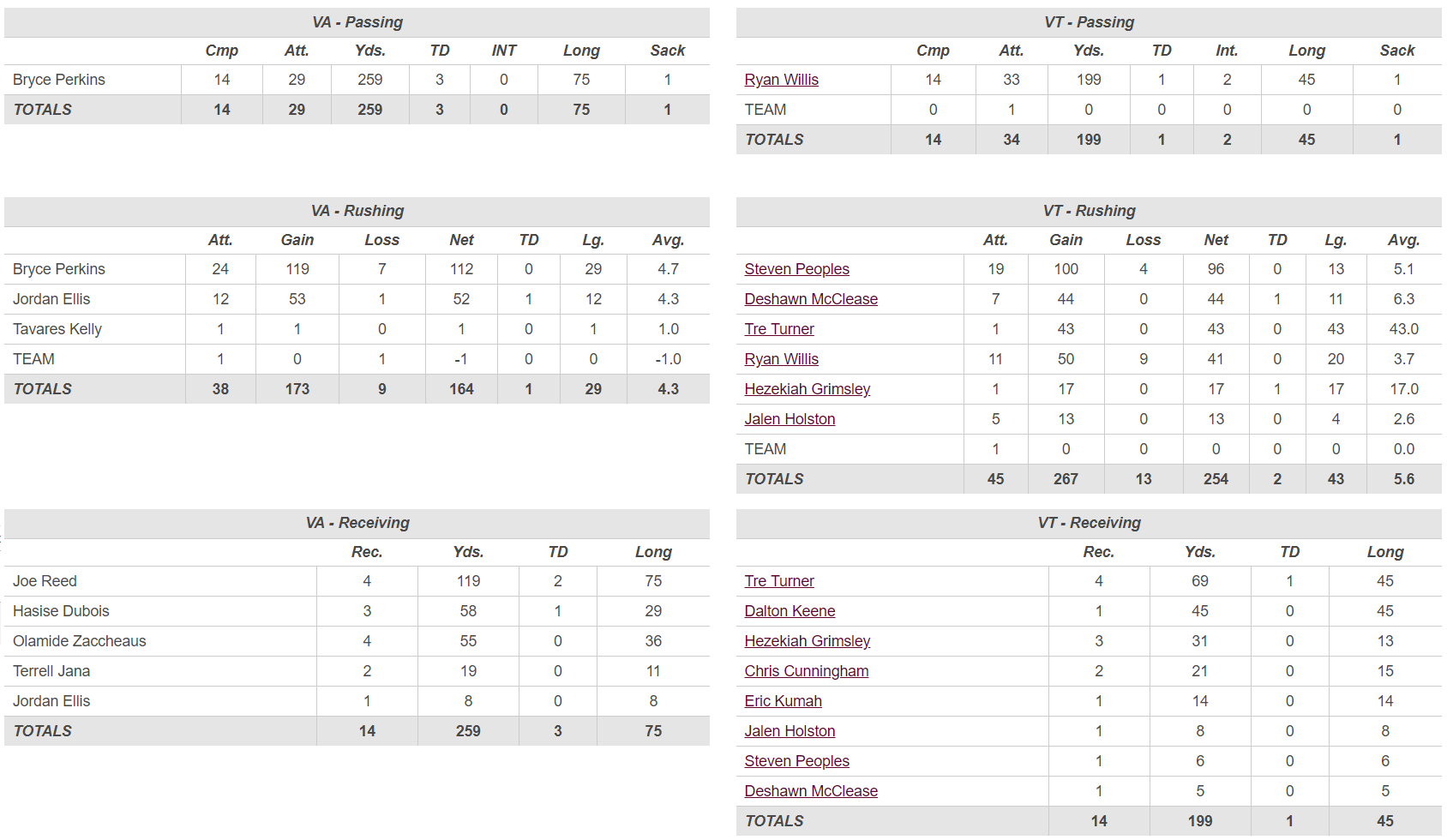