Sponsored by The Fisher Law Firm: Virginia’s DUI and Traffic Defense Firm! From our locations in Blacksburg and Roanoke, we serve all of the Commonwealth. For a free consultation call us any time, day or evening at 800.680.7031 or email us at [email protected]

1) Is Kelly Bryant a take for us, if he chose to? Or better yet, knowing what you know about the program, would you put forth the effort to pursue him? We do have a lot of bodies in the Qb room. If by chance you could land him, what kind of outlook would you have for the quarterback position, 2020 and moving forward? – thankbud

Chris Coleman: As far as I know, Virginia Tech is not pursing Kelly Bryant, nor do I think they will. If I were in charge, I wouldn’t pursue him either.

Bryant is a running back who plays the quarterback position. He’s a tough, physical runner, but he’s not a particularly good passer, and Clemson’s downfield passing game struggled with him behind center last season. However, their overall talent level masked his deficiencies. I don’t think he would be a good fit for Virginia Tech’s offense, especially when you consider that the Hokies have a pair of starting caliber players at the position now, not to mention two talented developing players in Hendon Hooker and Quincy Patterson.

If the Hokies are going to spend a scholarship on a transfer, I’d rather it be a defensive lineman or a cornerback. I don’t think Bryant would start for the Hokies. He’ll be visiting Chapel Hill for the VT-UNC game this weekend, however, so the it’s possible that Tech could face him again next season.

2) How quickly can you rebuild a secondary with so much attrition? Are we in for a multi-year rebuild before we can get back to being DBU? – HokieHigh

CC: I think that varies from place to place, and from one group of players to another. Some players are ready to contribute at a high level early in their career, where others take more time. We’ve seen some of both at Virginia Tech throughout the years.

Stroman is the perfect example, actually. He was toast until his true sophomore season. He got better at that point, but he really didn’t become a good, trusted player until he was a junior, and then he got even better as a senior. His third year in the program is when we really began to see signs that he was a good player.

I don’t necessarily think that Virginia Tech will get back to being a dominant secondary later this year, or even next year, but I do think having a healthy Jeremy Webb and Divine Deablo would make a huge difference.

3) Tight ends? What do you think is the main reason for lack of production in the passing game? After seeing Dalton’s TD against Duke and Chris Cunningham’s success in the past I feel like they should have bigger numbers in the passing game. Is it more on them to be more productive? The game plan? The QB? – hokieton

I understand the sentiment. I always felt like Bryan Jennings needed to touch the ball more back in the mid-90s, and I thought guys like Derek Carter, Browning Wynn and Bob Slowikowski were underutilized a few years later.

It seemed like every time one of those guys caught a pass it went for a big play and a first down. Here were their numbers in 1999…

Those are some big-time gains. Of course, perhaps one of the big reasons that they were big time gains is because the Hokies didn’t go to that well very often. The tight ends were sort of our secret weapon that we broke out every once in awhile to catch the defense off guard. Other than that, they were just blockers.

Things are sort of similar this year. It seems like every time the Hokies throw it to a tight end, it results in a first down. So yeah, maybe they should get those guys involved a little more. At the same time, Tech’s receivers are much better this year. For every pass that is throw in the direction of Chris Cunningham, that’s one pass that isn’t thrown in the direction of Damon Hazelton.

Personally, I don’t think I’d be willing to change much about Tech’s passing game right now, with regards to how they are distributing the ball. They rank No. 26 nationally in passing marginal efficiency, and No, 19 nationally in passing marginal explosiveness. I’m pretty happy with the way things have gone, considering the Hokies have started two different quarterbacks.

4) Are you surprised that only Steven People’s seems to have really improved at RB this past offseason? – Ranger Sam

CC: Yes, I am. Peoples couldn’t break a tackle to save his life last season, but he’s doing a much better job in that regard this year. It’s showing up in his numbers. Let’s take a quick look, starting with last season…

Now compare them to this season…

He’s rushed for 99 more yards on six fewer carries than he did a year ago. Peoples missed a lot of time with a fractured foot last year, but even before the injury he did not show the tackle breaking ability that he’s flashed this season. I’m glad for him, because he’s a likable guy. For what it’s worth, Deshawn McClease’s highlight yards per opportunity (basically, yards that can be credited to the running back’s ability, not his blocks) have also increased from 3.2 to 3.9, so both backs have shown improvement.

I don’t think there’s much question that Peoples is Virginia Tech’s best back right now. He went for well over 100 yards against ODU, and he would have gone for over 100 against Notre Dame had the Hokies been in a position to run the ball more in the second half. 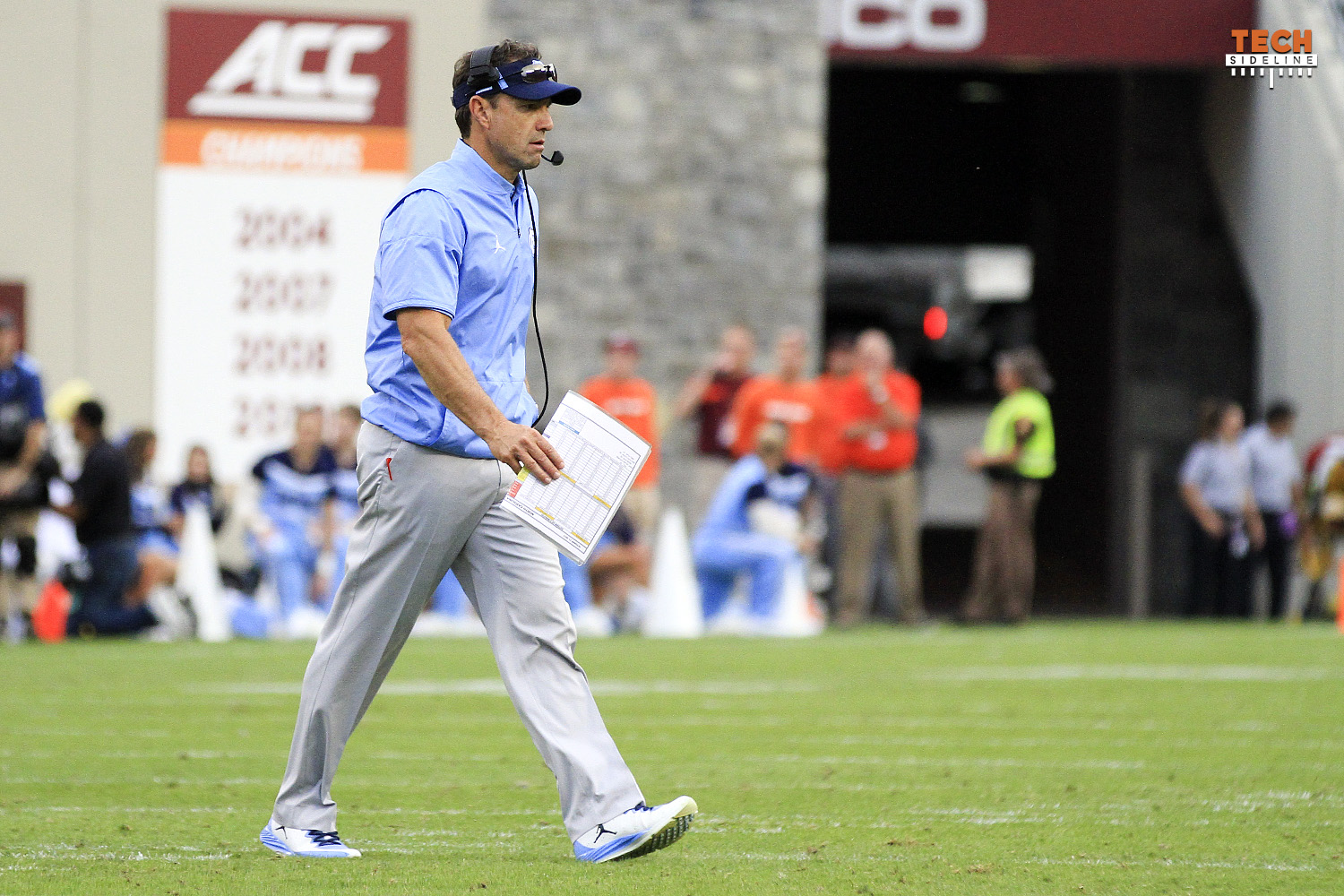 5) You’re the UNC AD. Do you keep Larry Fedora? Who would you be talking to for a replacement? They’ve had some bad luck and some self-inflicted wounds the last few years, so you could give Fedora a break, but I just don’t think he’s a great coach. – VermontHokie

CC: Fedora has his strengths and weaknesses as a coach, like everybody else. His big weakness is his inability to put a good defense on the field. The Tar Heels are usually pretty soft on that side of the ball, for whatever reason. It’s where good defensive prospects like Jalen Dalton go to become mediocre players. I don’t see that changing any time soon.

Fedora was always able to overcome that with good offenses, and in particular he always had good quarterback play with Bryn Renner, Marquise Williams and Mitch Trubisky. Those guys were good players. Then, for whatever reason, the good quarterback play stopped. Chaz Surratt was supposed to be the next really good quarterback for UNC, but it hasn’t turned out that way. Nathan Elliott lacks talent, so that was just a recruiting miss by Fedora.

If I’m the UNC athletic director, I’m thinking two things. First, Fedora’s defenses have always stunk, and they probably always will. Second, now he doesn’t have a quarterback. So what are his strengths as a coach now? I don’t know that he has any. If he does, they can’t overcome a bad defense and a bad quarterback. I don’t think any coach can overcome that. At this point, I’d be leaning towards going in another direction, though I’d certainly acknowledge that they had a really tough injury situation last year.

I don’t know who I’d try to go after as a replacement. I’m always so locked in on Tech’s games that I don’t get to watch very many other games, outside of the big ones. That said, I’d give strong consideration to Appalachian State head coach Scott Satterfield. He’s a North Carolina native, and he’s managed Appalachian State’s transition to FBS football. He’s 45-23 in his career, and he’s gone 7-1 in the Sun Belt in each of the last three seasons. He also nearly knocked off Penn State in Happy Valley earlier this season.

Satterfield is an Appalachian State alum, though, and he’s spent almost all of his coaching career there. I have no idea if he’d be interested in taking the job. He has great job security in Boone.