For the second time this season, Virginia Tech rebounded from a tough Saturday loss at home to defeat one of the nation’s top teams on ESPN’s Big Monday.  This time the victim was No. 5 Duke, who fell to the Hokies 64-63.  Tech improved to 21-9 overall and 10-7 in the ACC with the win, and they’ve all but punched their ticket to the 2018 NCAA Tournament.  The Blue Devils dropped to 24-6 and 12-5 in conference play.

This game was much more dramatic than the Big Monday win over North Carolina, which was dominated by the Hokies in most phases.  Against the Blue Devils, Tech led for just one minute out of 40 minutes.  Chris Clarke put in the game-winner off of an offensive rebound with just over four seconds remaining, and Grayson Allen’s three-pointer at the buzzer was off.

Clarke scored Virginia Tech’s final six points of the game as the Hokies defeated Duke for the second time in as many seasons in Cassell Coliseum.

“Forget the tournament, I’m just happy to get a win on Senior Night for Devin and Bibbs,” Robinson said. “They’ve given so much to this program, and I’m so proud of them.”

There were two key stretches that were the difference in the game for the Hokies.  Virginia Tech played great defense down the stretch in the first half to work their way back into the game.  Duke only scored four points for the remainder of the half following a Marvin Bagley III dunk with exactly nine minutes remaining.  At that point it was 29-14, but by halftime the Hokies had worked it to a manageable 33-27 Blue Devil lead.

Tech also ended the game strong defensively.  Duke’s last field goal of the game came on a Bagley layup with 7:02 remaining.  They could manage just five free throws for the remainder of the contest, as the Hokies turned a nine-point deficit at the 7:02 mark into a one-point victory.

This picture from SportsCenter that was captured by Will Stewart illustrates Tech’s dominance down the stretch in the second half. 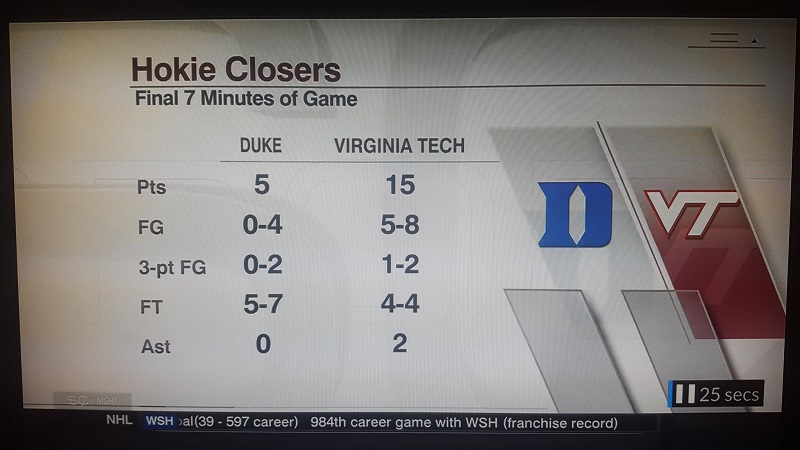 Once again, it was Tech’s ability to force the opposing offense to settle for long jumpers that was the difference in the game.  28 of Duke’s 52 shots came from three-point range, and they made just eight of them (28.6 percent).  Grayson Allen was just 6-of-18 from the field, and he had six turnovers, though he did finish with a game-high 22 points.

Virginia Tech was able to keep the ball away from future lottery picks Marvin Bagley III and Wendell Carter, Jr. for most of the game.  Bagley had 12 points and seven rebounds, while Carter had five points and eight rebounds.  They took just 14 shots combined, as the Blue Devils were forced into a perimeter game, as most of Tech’s opponents have been recently.


“Our defense is good when you don’t give up a lot of live-ball turnovers, that’s when [Virginia Tech is] really good – when they are in transition,” Mike Krzyzewski said after the game. “To their credit, they made a big play at the end.”


Virginia Tech freshman wing Nickeil Alexander-Walker outperformed Duke’s highly-touted freshmen on Monday night.  He led the Hokies with 17 points, going 7-of-14 from the field and 3-of-8 from the outside.  He also had two steals in 35 minutes.

Alexander-Walker’s biggest shot might have been the one he missed.  His jumper with six seconds remaining was too long, but Chris Clarke cleaned it up with the putback with just over four seconds left.

“A lot of people didn’t think it was a pass,” Alexander-Walker joked after the game. “But I lobbed it up perfectly.”

He went on to note that it was the best miss of his career.

“I knew we had to play with an incredible level of energy just to have a chance,” Williams said. “I thought our staff was superb, as were our kids in handling what was given to them and then executing it.”

The victory was Virginia Tech’s third of the season against a top-five RPI team.  Virginia currently sits No. 1 in the RPI, with North Carolina at No. 4 and Duke at No. 5.  The Hokies also have a victory over No. 10 Clemson.  As of now, Virginia Tech has five Quadrant One wins and four Quadrant Two wins.  Their NCAA Tournament resume is very strong across the board, with the exception of non-conference strength of schedule, but even that won’t keep them out this season because of their high number of quality wins.  Still, senior Justin Bibbs isn’t taking anything for granted.

“I don’t want to jinx anything,” Bibbs said when asked about the NCAA Tournament after the game.

The Hokies have a chance to add to their already impressive resume when they travel to Miami for the final regular season game of the season.  Tipoff is scheduled for noon, and the game will be televised nationally by ESPN2.

Tonight was Senior Night for the Hokies. Devin Wilson and Justin Bibbs each exited Cassell Coliseum on a winning note. The Hokies also honored senior managers Michael Reutt and Jason Swartz in the pregame ceremony.

Tech is now 4-12 all-time against teams ranked fifth in the AP poll and have won the last two such games. Both have been against No. 5 Duke in Cassell Coliseum in the last two seasons. Tech is now 3-4 against Duke when the Blue Devils have been ranked No. 5 nationally.

With the win, the Hokies are now 21-9 overall and 10-7 in the ACC. The win assures the Hokies of a winning ACC record for the third consecutive season, the first time Tech has accomplished that since joining the ACC in the 2004-05 season.

Tech has also assured itself of a winning home record and a winning road record in the same season for the first time since joining the ACC.

Nickeil Alexander-Walker scored 17 points. It is the 15th time this season he has scored in double figures.

Justin Bibbs scored 14 points. It is his 20th game in double figures this season. With his 14 points, he now has 1,416 points. He passed Deron Washington tonight into 19th place in career points at Virginia Tech.

Kerry Blackshear Jr. scored 13 points. It is his 19th game in double figures this season.

Justin Robinson scored 11 points. It is his team-best 23rd game scoring in double figures this season.

Tonight was the Hokies’ ninth sellout of the season and seventh in ACC play.

The Hokies are now 4-0 in games decided by five-or-fewer points this season.