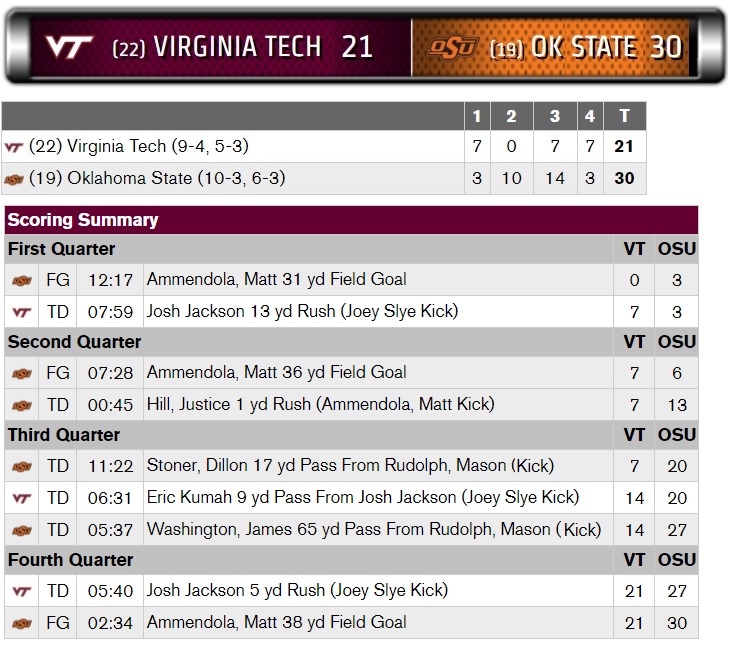 ORLANDO, Fla. — Outmatched and outgunned, Virginia Tech needed to make every opportunity count. The Hokies could not afford to make big mistakes, and needed a pinch of luck.

Instead, Virginia Tech squandered a great first quarter and fell to Oklahoma State in the Camping World Bowl by a score of 30-21.

The mistakes added up by the end of the night. Virginia Tech fumbled on the Oklahoma State 1-yard-line in the second quarter, allowed Biletnikoff Award winner James Washington to run free for a 65-yard touchdown after cutting the Cowboys’ lead to one score, failed on a critical fourth down in the fourth quarter thanks to a poor snap, and also threw an interception in Oklahoma State territory. Tech also committed five penalties for 65 yards.

All of these mistakes proved to be too much to overcome.

“We had a plan, and we executed it well at times,” said head coach Justin Fuente. “My initial thoughts on the game — I don’t remember Oklahoma State making very many, if any, mistakes, and we made a handful. Just enough to kind of keep us from pulling the thing off.”

Virginia Tech’s offense needed to play their best game of the season vs. Oklahoma State, and simply didn’t.  The Hokies’ offense built their gameplan around running the football and controlling possession, and found some success. Tech finished with 248 rushing yards as a team, their highest rushing total since Sept. 23 vs. Old Dominion. Deshawn McClease led the way with 124 rushing yards, while Steven Peoples added 56 yards.

Tech executed their gameplan well in some areas. The Hokies won the time of possession battle handily, holding the ball for 38:13 and keeping their defense off the field for extended periods of time. Tech also moved the chains on third down, converting on 10 of their 18 third down attempts.

Quarterback Josh Jackson was uneven all night long, completing 22 of his 41 pass attempts for 248 yards, one touchdown and one interception. Jackson was a big factor in Tech’s running game for the first time in weeks, carrying the ball 16 times for 50 yards and two touchdowns. Jackson was at least partially responsible for two turnovers, each of which cost the Hokies on the scoreboard.

“I don’t really feel good about this game,” Jackson said. “I think I missed too many throws. I don’t think I played very well.”

The Hokies’ defense did their best to contain Oklahoma State’s offense, which led all Power 5 teams in points scored per game this season. Thirty points is the second lowest point total for the Cowboys all season, and Tech actually out-gained Oklahoma State in yardage 518-492.

“Well, there’s no consolation prize in this game,” said defensive coordinator Bud Foster. “Our kids played hard. I’d like to have a couple plays back. We played for 60 minutes and I’m proud of the kids. You saw, there’s some dynamic players on that side of the ball, and you give them credit. I liked our plan, we just, we didn’t capitalize on some opportunities on both sides of the ball.”

Quarterback Mason Rudolph turned in a great performance, throwing for 351 yards and two touchdowns on 21 of 32 passing. James Washington and Marcell Ateman both finished with over 100 receiving yards, while Justice Hill added 120 rushing yards and a touchdown on the ground. Still, to allow Oklahoma State to just 30 points, that’s an achievement.

“I think we played pretty good,” said Andrew Motuapuaka. “I think we gave them a few plays and stuff, but I think we did a good job of executing all around the board. We just missed some opportunities that we had.”

Virginia Tech’s mistakes washed away a great opening period, where the Hokies took control. After holding the Cowboys to a field goal on their opening drive, the Hokies embarked on an eight-play, 76-yard touchdown drive that used up over four minutes of game time. Tech relied heavily on the ground game, in hopes of keeping their defense fresh and Oklahoma State’s offense on the bench. The gameplan worked early, as the Hokies led 7-3 after the first quarter.

After Virginia Tech’s stellar opening quarter, the Hokies began to unravel. Tech commandeered a 18-play drive that took ten minutes off the clock. The Hokies marched all the way from their own nine yard line down to Oklahoma State’s one yard line, and seemed to have scored on a run by Peoples. However, the referees confirmed the original call that he was down before crossing the goal line.

On the very next play, Tech fumbled on an exchange between Jackson and Peoples. Oklahoma State recovered the fumble, and quickly got into the red zone. The Hokies defense stood tall though, allowing just a 36-yard field goal from Matt Amendola. Oklahoma State trailed 7-6 with 7:28 left in the half.

“I tried to pull it late, and Peoples is a strong guy, had a good grip on it and I just didn’t get it. So that’s my fault,” Jackson said.

Virginia Tech was forced to punt on their next two drives, and allowed Oklahoma State to take the lead before halftime. Rudolph found Marcell Ateman for 50 yards down the sideline, setting up the Cowboys inside one yard line. Justice Hill ran it in on the next play, giving the Cowboys a 13-7 lead heading into the break.

Oklahoma State took their first drive of the third quarter for a touchdown. Rudolph made several big plays, including a 19-yard scramble. Rudolph capped the drive with a 17-yard touchdown pass to Dillon Stoner, putting the Cowboys up 20-7 with 11:22 left in the third quarter.

Down 13, Virginia Tech desperately needed a touchdown. The Hokies offense, which has struggled for several weeks, put together a nine-play, 79-yard touchdown drive that ended with a spectacular catch by Eric Kumah, as Kuman won a one-on-one battle and took the ball away from the defensive back. The Hokies trailed 20-14 with 6:31 remaining in the third. 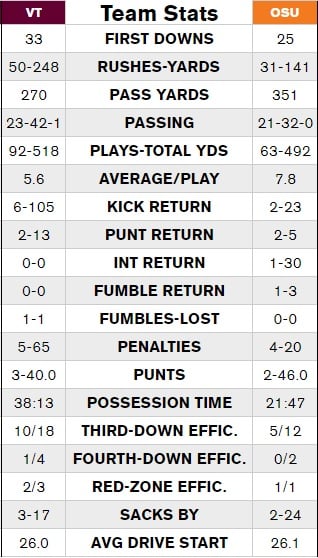 “That was one I’d like to have back,” Foster said. “We were scrambled just a little bit, they went up-tempo, and just caught it. It was a good call on their part when it’s all said and done. Good execution. But that guy’s going to get his catches, or his catch or two. We gave up two big plays when it’s all said and done on defense that were costly.”

Virginia Tech needed to answer with yet another touchdown drive, but failed. The Hokies moved it all the way down to the Oklahoma State 11 yard line, but opted against a field goal attempt and tried to convert a fourth and eight at the beginning of the final period. A bad snap ruined the play, and Jackson was sacked for a loss of 16.

The Hokies’ defense continued to fight, getting stops on Oklahoma State’s next two drives. However, on Tech’s next possession, Jackson was intercepted at the Cowboys’ 29-yard-line. Yet another mistake on offense.

After Virginia Tech held the Cowboys on their next drive, the Hokies once again made it a one-score game. Jackson completed four passes, including a 31-yarder to Eric Kumah, putting the Hokies near the end zone. Jackson finished the drive with his second touchdown run, cutting Oklahoma State’s lead to 27-21.

Tech’s defense had a chance to give their offense one more chance, but failed. Facing a third and 11, Justice Hill busted outside for a 31-yard run, putting Oklahoma State in field goal range. Minutes, later, Matt Ammendola hit his second field goal of the night, giving the Cowboys a two-score lead with less than three minutes to go.

The Hokies’ loss drops them to 9-4 on the season, and ends Virginia Tech’s three-game bowl win streak. Tech also will fall just short of a 10-win season, a feat accomplished just once since the 2011 season. A nine-win season is certainly nothing to scoff at, but falling short of the 10-win mark is a hard pill to swallow.

“This one hurts, man,” defensive tackle Ricky Walker said. “We wanted to send those seniors out right. As you can see, we didn’t quit, we didn’t give up. That’s all (Fuente) preached to us since he’s been here. But this one, it just hit a different spot.” 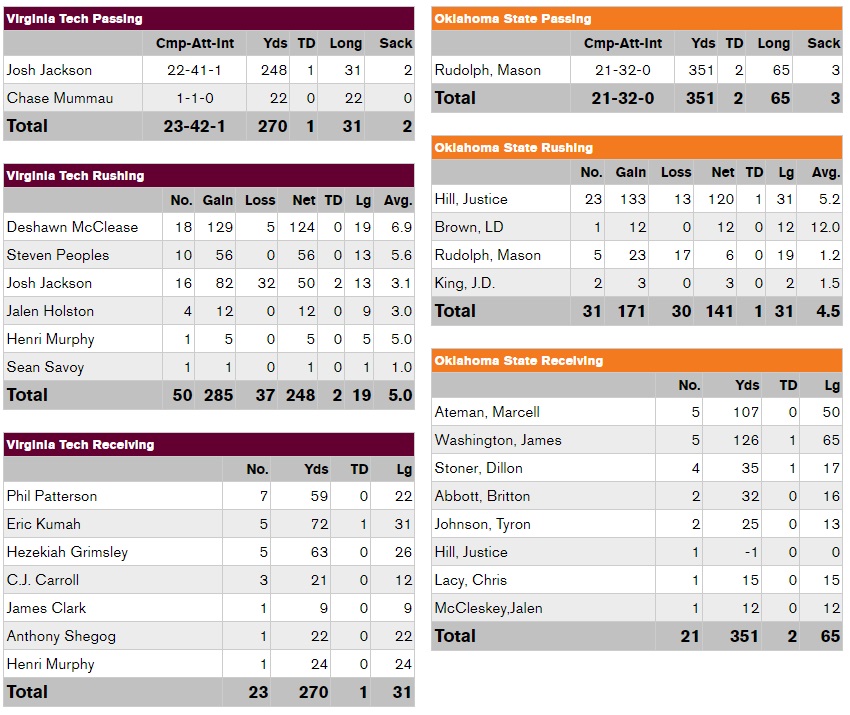