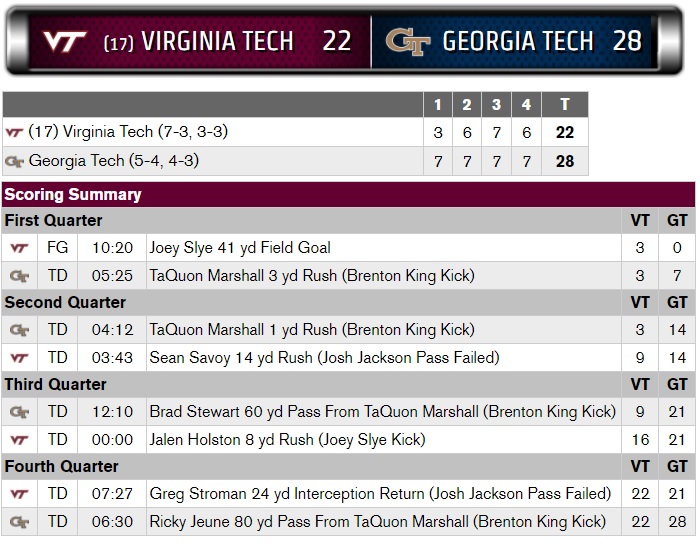 “It’s a tough locker room right now man,” Fuente said. “That’s a quiet locker room. Our guys played hard. We did not play well enough to win the football game. I think there’s plenty of reasons for that that go all the way around. Ultimately, we came up a little bit short. We had our chances. The way we played both gave us chances to win the game, and also caused us to be in the situation we were in. It’s disappointing, and I feel for our guys. They’re sitting here 7-3 right now, and feel awful, but they did recover from last week. I don’t want to hear anything about, ‘They didn’t recover.’ They played their tails off. They really did.”

The Hokies offense struggled for much of the day, while the defense allowed two touchdown passes in the second half, each of those passes coming from 60 yards out or more. Georgia Tech’s offense thrived off of the big play, totaling 209 yards and 14 points in three plays. Georgia Tech had a 69-yard run that set up their first score, a field goal.

“In this game, you can give up one, maybe two explosive plays and win the football game. More than that, and it’s going to come back and bite you in the tail, and it did,” said Virginia Tech defensive coordinator Bud Foster.

Georgia Tech’s big plays gave the Hokies chances to lose, but Virginia Tech also had opportunities to win. The Hokies took their first lead of the game midway through the final period, as Greg Stroman returned an interception 24 yards for a touchdown to put Virginia Tech up 22-21 (after a missed two-point conversion).

On the ensuing kickoff, Georgia Tech recovered their own fumble. Instead of taking over with great field position, Virginia Tech allowed an 80-yard touchdown pass from TaQuon Marshall to Ricky Jeune two plays into the drive, giving the Yellow Jackets the six-point lead they held onto for the duration of the contest.

“When you played the way we played, and just to have a couple plays in the course of the game, but at this level, each week, when you’re playing good people, there’s a fine line and it’s usually a couple plays for you or against you, and unfortunately today they went against us,” Foster said.

Virginia Tech got another chance to win the game. The Hokies converted two fourth downs on their next drive after Georgia Tech went up 28-22, and faced a third and one from Georgia Tech’s 32-yard-line. Tech ran two pass plays, and failed to connect on either of them. The first was a fade route down the sideline to Eric Kumah, and the fourth down throw was deep to Cam Phillips, who couldn’t make the reception.

“We’ve got the best matchup we could possibly get,” Fuente said. “We’ve got press coverage with our best guys. Everything that we did was a struggle offensively. We had a couple of opportunities there to go freaking win the game, and we took those, and we didn’t come through in them, but that was the deal. Whether it was third and one, whether we make another yard or have another opportunity, those were our chances.”

Virginia Tech’s struggles on their final drive were indicative of their entire performance. The Hokies’ offense was responsible for just 16 points, and totaled just 258 yards of offense.

Those offensive limitations led the Hokies to get aggressive in their play-calling. Virginia Tech passed up a field goal attempt on fourth and two from the Georgia Tech eight yard line early in the second quarter and failed to pick up the first down. That led to the Hokies chasing points later in the game, and they tried two two-point conversions, both of which failed. Those five points wouldn’t have pushed the Hokies over the top, but it could have brought a field goal attempt into play on Virginia Tech’s final drive.

“When you take, I think there was three plays that had about 200 yards, and that’s half their offense in three plays,” Foster said. “I thought our guys played extremely hard and fought hard and played hard, so that’s disappointing. All of those kids. I thought Timmy and Ricky, particularly those two guys, were warriors inside. I thought Andrew Motuapuaka was all over the place today, and our kids played extremely hard.”

Virginia Tech’s defense looked good on the Yellow Jackets’ first possession, but let a big run pop on the next drive. Georgia Tech’s Nathan Cottrell busted a 69-yard run to put the Yellow Jackets in scoring position, and Marshall capped off the drive with a 3-yard rush, giving Georgia Tech a 7-3 lead with 5:25 left in the first quarter. Georgia Tech struck again towards the end of the half, driving 79 yards in 11 plays and taking a 14-3 lead with 4:12 left in the second quarter on a one yard run by Marshall.

In need of momentum, Virginia Tech’s Travon McMillian returned a kickoff 70 yards, giving the Hokies terrific field position at the Georgia Tech 29. After a Georgia Tech pass interference penalty, Sean Savoy finished the effort, reversing course on a jet sweep for a 14-yard touchdown run. Tech stayed aggressive, deciding to go for the two-point conversion, but failed there as well. Virginia Tech would hold the Yellow Jackets on their final drive before the break, and went into halftime trailing 14-9.

Early in the third, Virginia Tech allowed their second big play of the day. Marshall took the play-action and found Brad Stewart open down field, adding a 60-yard touchdown to the scoreboard. Georgia Tech led 21-9 with 12:10 left in the third quarter, with the game all but out of reach.

Georgia Tech drove down the field again on their next drive, but missed a 43-yard field goal. Virginia Tech capitalized, as Jackson and backup AJ Bush engineered a 12-play, 74-yard touchdown drive that brought the Hokies within just five points. Unfortunately for the Hokies, their missed opportunities in the fourth quarter doomed them to defeat.

With the loss, Virginia Tech drops to 7-3 overall and 3-3 in the ACC. The Hokies can win out, including their bowl game, to get to 10 wins, but still have Pittsburgh and an improved Virginia team left on the docket. Virginia Tech’s game vs. Pittsburgh will kick off at 12:20 p.m. on Nov. 18, and the game will be televised on the ACC Network. 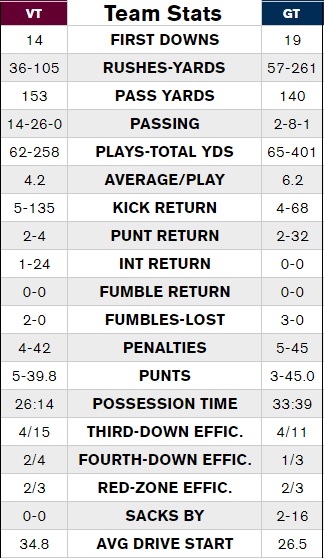 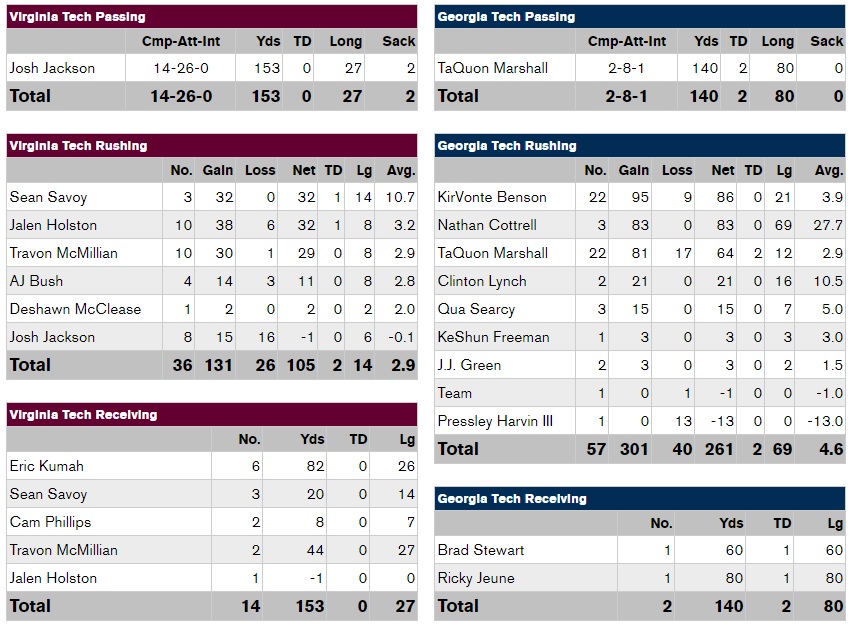