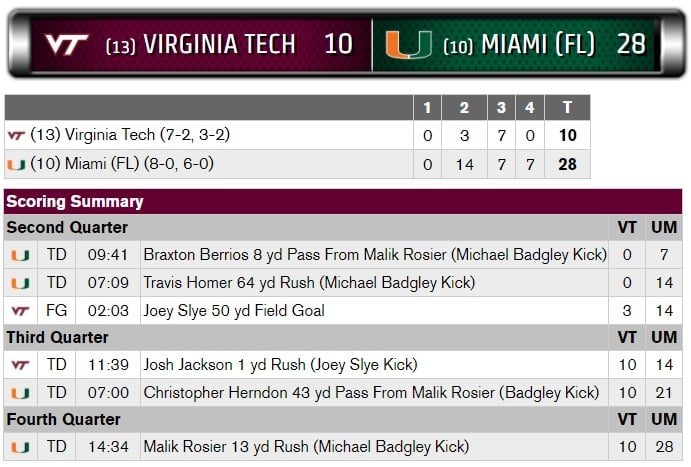 MIAMI — There were two major keys for Virginia Tech on Saturday night, if they wanted to knock off the undefeated Miami Hurricanes — take care of the ball, and don’t allow big plays. The Hokies failed to do either of those things, and lost to the ‘Canes 28-10.

“Coach (Mark) Richt has a fine squad over there,” said head coach Justin Fuente. “They’re good and sound and talented in all three phases of the game. They are a well-coached, tough football team. We, in my opinion, are too. But, our kids played hard, they laid it on the line, they played in a hostile environment and we weren’t good enough today to win the game. There’s a myriad of factors for that, that’s ultimately my responsibility, to get us to play up to our potential and the best that we can, and part of it is that we played a really good football team.”

Virginia Tech struggled both on offense and on defense on Saturday night. The Hokies coughed it up twice, totaled just 299 yards and went 3-14 on third down conversion attempts. Quarterback Josh Jackson finished the night 20-32 for 197 yards and two interceptions, while the Hokies averaged just 2.4 yards per rush as a team.  Virginia Tech also turned the ball over four times, two of which were fumbles.

Virginia Tech’s offense wasn’t bad on the early downs. The Hokies averaged 6.4 yards per play on first down, but really struggled on third down anyway.

“I felt like just in general, offensively, whether it was off a turnover or starting a series, we would get a little bit going but we couldn’t convert on third down,” Fuente said. “Yeah, I mean it was really bad, and Miami deserves credit for that. We just couldn’t keep a drive going. It wasn’t that we weren’t efficient on some first and second downs, we just couldn’t keep it going.”

Miami’s offense has survived on big plays all season, and did so again vs. the Hokies. The Hurricanes registered 13 plays of 10 yards or more, and four plays of 36 yards or more. While Miami quarterback Malik Rosier threw three interceptions, he also finished with 277 total yards and three total touchdowns. Travis Homer had an efficient day on the ground as well, finishing with 95 rushing yards and a 64-yard touchdown run.

Virginia Tech defensive coordinator Bud Foster said, “We knew that was what they relied upon going into this game, and we had to — we couldn’t allow them to have success number one, running the football, which they did, which was disappointing. Then number two, they were going to take some shots down the field, they did. We had some opportunities, we got a couple picks as well, but you’ve got to give Miami a lot of credit. I thought they played their best football game tonight.

“We weren’t as sharp, for whatever reason. We missed tackles, we didn’t fit our gaps like we had the previous few weeks, and that was disappointing. I’m proud of our kids. We played hard, but we weren’t as sharp as we needed to be, and a big part of that, the credit goes to Miami.”

Miami’s chunk play offense put together an impressive first half. The Hurricanes had eight different plays of 10 yards or more, including plays of 20, 24, 36 and 64 yards. Miami’s first scoring drive (nine plays, 87 yards) was also aided by two pass interference penalties on Adonis Alexander, and the drive ended in an easy 8-yard reception from Braxton Berrios for the touchdown. The ‘Canes’ second score came on Homer’s 64-yard touchdown run midway through the second quarter, giving Miami a 14-0 lead.

Virginia Tech’s offense slogged through most of the first half, but finally found some life towards the end. After four punts to start the game, the Hokies engineered a 10-play, 41-yard drive that ended in a 50-yard Joey Slye field goal. After cutting Miami’s lead to 11, Alexander picked off Rosier deep in Hokies territory and gave Tech a chance to tack on more points before halftime.

The Hokies moved the ball quickly, picking up 53 yards in just four plays. However, a Sean Savoy fumble inside Miami’s 20-yard-line ended any chance of Tech adding more points, and the Hokies trailed 14-3 at halftime. On the play, Miami’s Jaquan Johnson put his helmet right on the ball as he tackled Savoy, popping the ball free. Miami’s R.J. McIntosh recovered at the ‘Canes’ 14 with just twelve seconds left in the half.

“I thought our fumble was a big hit,” Fuente said of the Hokies’ turnovers. “I thought a couple of the interceptions, we were getting a little bit of pressure, the ball was just a little bit off, I mean I certainly think — I don’t think it was a lack of attentiveness to or an urgency to take care of the ball. I think they did a really good job, and forced our hand. It’s not like they blitzed all the time, that’s not what I’m saying, it’s just — we were in some fourth downs, or we were pressing to try and make some first downs to try and score.”

Virginia Tech generated momentum to start the third quarter. After a Rosier interception on Miami’s first possession of the half, Tech turned it into a touchdown to cut the lead to 14-10. Reggie Floyed intercepted the ball at the Virginia Tech 46 and returned it 37 yards to the Miami 17, where the Hokies scored five plays later on a one-yard run by Jackson.

Tech’s Greg Stroman intercepted Rosier on the next Miami possession, but the Hokies turned it over on downs after driving to the Miami 32 yard line.

“We came out, defensively, we came out and what, three picks? That’s huge,” Tech defensive tackle Ricky Walker said. “We put the offense in position. Coach Fuente, he’s the head man, he made his calls and we all, we trust him. I think we had a bad snap on fourth down, but other than that, it’s tough seeing that.”

Miami then scored two touchdowns in three possessions, thanks to a 43-yard touchdown pass to Christopher Herndon and a 13-yard touchdown run by Rosier. The ‘Canes took a 28-10 lead early in the fourth quarter and never looked back.

“Miami did some good things. I think we helped them a little bit, but at the same time you’ve got to give those guys credit,” Foster said. “They executed, we didn’t. When it’s all said and done, that’s the bottom line.”

For the Hokies, they still have a chance to win 10 games in consecutive seasons. Virginia Tech, now 7-2 overall, has games remaining against Georgia Tech, Pittsburgh and Virginia. However, only one of those games is at home, with road trips to Atlanta and Charlottesville on tap.

“We’re not worried about that right now,” said defensive tackle Ricky Walker. “We’ve got Georgia Tech this week, away, at their place. It’s going to be another hostile environment. You know how that offense is, so we’ve got to get back to work tomorrow.” 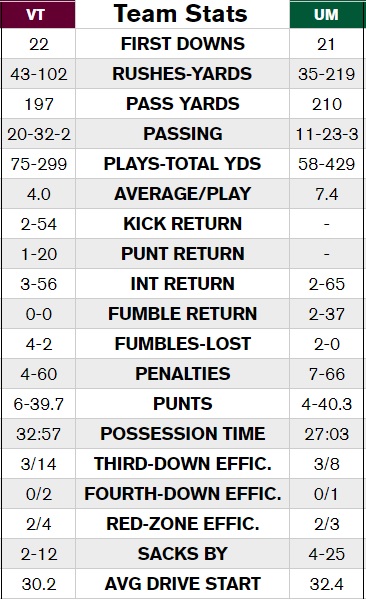 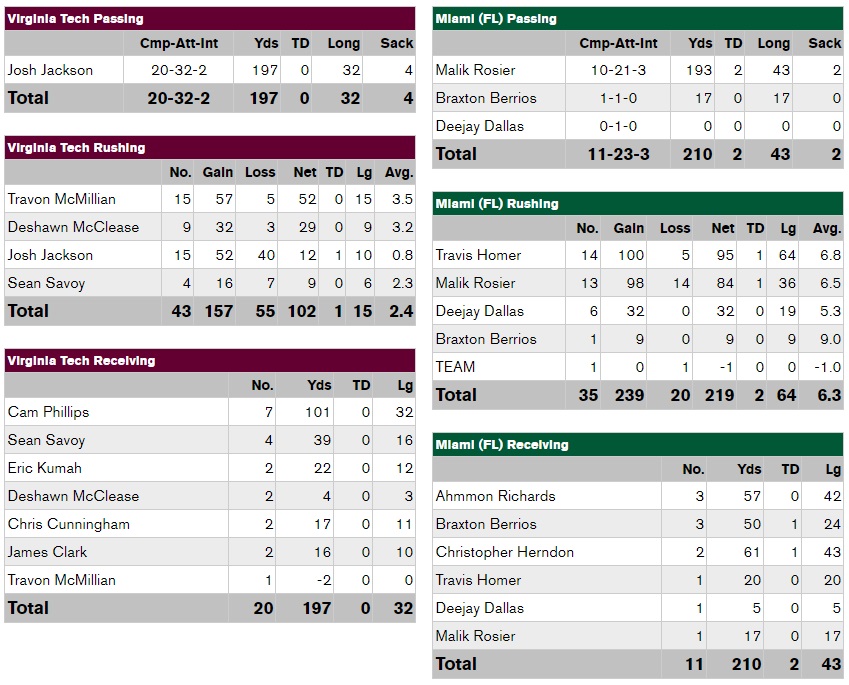