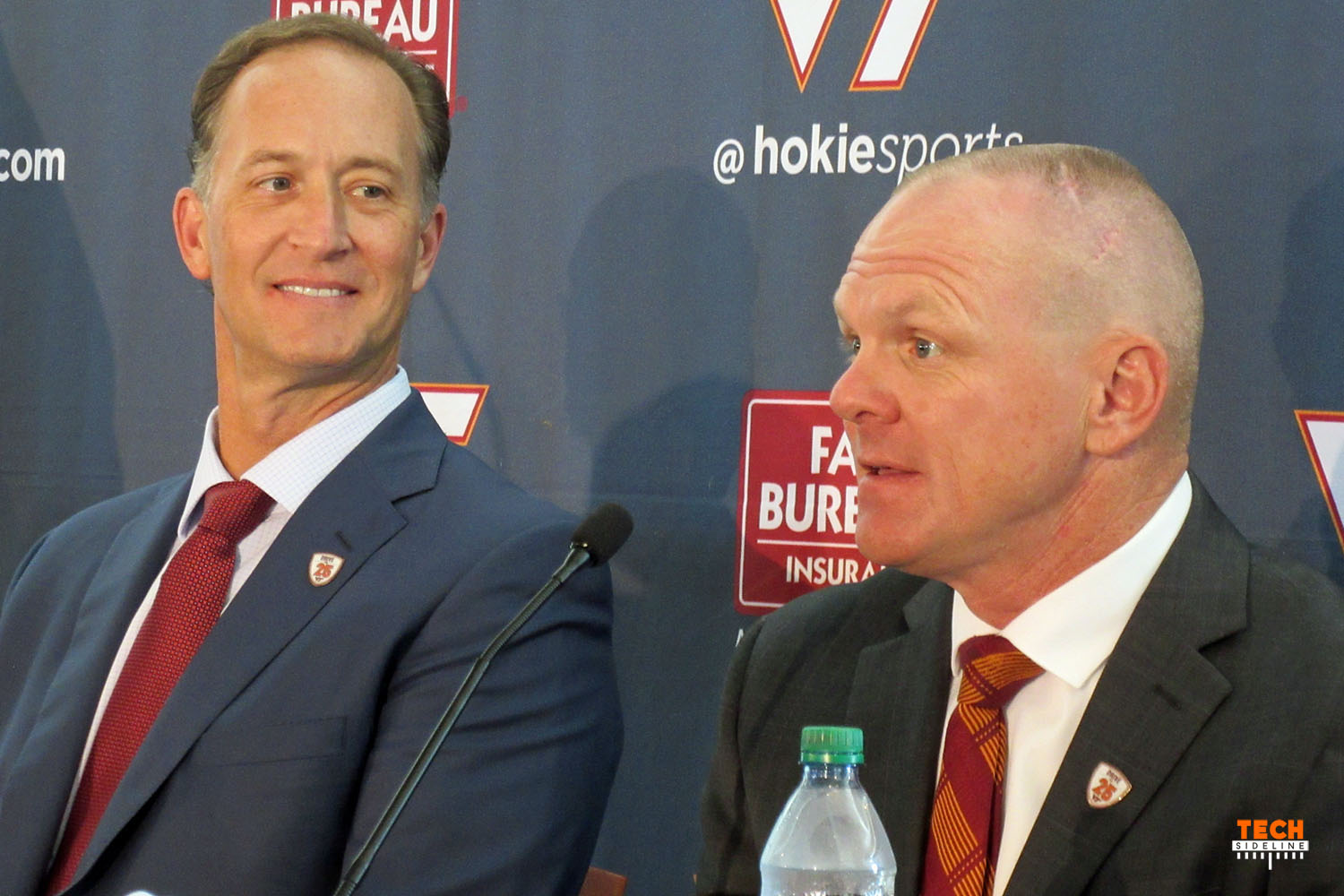 The Virginia Tech baseball program has a new coach in John Szefc. English Field at Union Park is getting major renovations to the facilities. So what’s the last part of the equation? There need to be good recruits who commit to the program.

So far the 2018 recruiting class, Szefc’s first official recruiting class, has nine commitments. Here’s a little background information on each of the recruits so we can get a better look into how they perceive the changes happening in Blacksburg.

Matt Ballance is a utility infielder/outfielder from Virginia Beach, Virginia where he attends Cape Henry Collegiate. This summer he played for the Stars Baseball showcase team.

Alex Havlicek is a right-handed pitcher from Oakland, New Jersey. He attends Indian Hills High School and played for Team Elite this summer.

Kevin Madden is a shortstop from Glenwood, Maryland where he attends St. Paul’s School (Baltimore). This summer, Madden showcased with the Evoshield Canes.

Nathan Starliper is a left-handed pitcher from Greencastle, Pennsylvania. He attends Greencastle-Antrim High School and played for the 17U East Coast Royals scout team this summer.

Max Dineen is an outfielder from Pennsville, New Jersey where he attends Pennsville Memorial High School. This summer he played for the Tri State Arsenal Prime program.

Nick Holesa is a third baseman from Huntingdon, Pennsylvania. He attends Huntingdon Area High School and played for the East Coast Lumberjacks.

Carson Taylor is a catcher and corner infielder from Duluth, Georgia where he attends Greater Atlanta Christian School. This summer he played for the 6-4-3 DP Cougars.

Chris Gerard is a left-handed pitcher from Wayne, New Jersey. He attends Bergen Catholic and played for Tri State Arsenal this summer.

Jack Billings is a right-handed pitcher from Voorhees, New Jersey where he attends St. Augustine Prep. This summer he played for the East Coast Royals.

It’s interesting to note that out of the nine recruits, five are position players and four are pitchers. Also, only one recruit is from Virginia while four commits hail from New Jersey.

Szefc’s hire was the biggest news for many of the recruits this summer. Those who were already committed to Virginia Tech now had to see how they would fit with Szefc. Those who were undecided, or even those who weren’t considering Tech, now saw a coaching transition that could change their minds.

Ballance was one of those recruits who committed to the Hokies when Pat Mason was the coach and decided to stay following the hire of Szefc.

“When Coach Szefc first got the job, I knew he was the perfect hire for the job,” Ballance said. “The amount of respect coaches and players have for him around the country is very noticeable. His track record of winning is very good and he elevates his teams to high levels of play.”

Taylor made his commitment to the Hokies following the news that Szefc was coming to Blacksburg.

“I committed after Coach Szefc was named head coach,” Taylor said. “I was recruited by VT this past summer and immediately felt a strong connection with Coach Szefc. He did a great job explaining his coaching philosophy, his plans for taking the program to the next level, and the key role I would play with the team. His excitement about the program and the team of coaches he pulled together were a big reason why I chose to commit to VT.”

Several players were even recruited by Szefc when he was at Maryland. Starliper and Gerard were among those who Szefc recruited at Maryland, then followed him to commit to Virginia Tech.

“I was a Maryland recruit and was looking forward to playing for him there,” Gerard said. “When the word came that he went to Virginia Tech, there was no hesitation to follow him there. We have a great relationship.”

So how was Szefc able to sway all these recruits to come to Blacksburg? A lot of it had to do with the genuine connections that Szefc built right away through his conversations with the players.

“He made it easy for me and my family to commit to the university,” Madden said. “Coach and I built a relationship very quickly. We have conversations all the time. He is always interested in what is going on in my life and how I’m doing, which is really nice to have a coach care about you this early. He is always willing to listen and give advice and do what’s best for me, which is important. I’m excited to be a Hokie and to learn and work with him and the rest of the staff.”

“I knew from reading up on him [Szefc] that he was a very blue collar coach who went about things very professionally,” Havlicek said. “We have had great conversations and he really has gotten to know me very well since he has taken over. I visited Tech again over the summer to meet with the new staff and was amazed by how dedicated they were into making VT Baseball a contender quickly.”

These players committed to Virginia Tech for a variety of reasons, whether that was because of the new coach, the positive direction the program is heading, or the location of the campus.

“What I am looking forward to the most when I get to Blacksburg is the atmosphere it has there,” Ballance said. “Looking forward to competing in the ACC and winning championships at a high level.”

“I believe that the new coaching staff will work amazing together and they will have the program getting better every day,” Starliper said. “The campus really seemed to fit me well. My hometown is a high school town so everyone comes out to watch football and other sports. I saw that in Blacksburg and I liked that.”

“It was the perfect fit for me,” Holesa said. “I loved the location of the college, and the campus is beautiful. I also knew with the new coaching staff that they would turn the program around and get them to be a top team.”

“I loved the coaching staff and the school itself,” Dineen said. “I went and visited and the facilities were great. I was the only outfielder at the time in my class, so it was a great opportunity for me.”

Another contributing factor that’s getting the attention of recruits is the renovations to English Field at Union Park, along with the upgrades to the James C. Weaver Baseball Center. The Hokies will finally have some first-class facilities that will measure up to other ACC baseball programs instead of lagging behind.

“I feel the upgrades show the commitment that the school has in the baseball program,” Gerard said. “The upgrades were just a plus, but it is great to be able to play in a brand new stadium and take advantage of all the new facilities.”

“I think it’ll help the program immensely with getting new recruits in,” Holesa said. “The upgrades swayed me, but I think they could have swayed anyone.”

“I feel like it will attract more fans,” Dineen said. “Also, the players will love the batting cages and the new locker room down in left field.”

Several recruits are already excited about the specialized work that they’ll be doing with their position coaches. The pitchers raved about Ryan Fecteau, the Hokies’ pitching coach, and how he’ll develop them into complete pitchers.

“Coach Fecteau is an unbelievable pitching coach,” Billings said. “When I was on my visit he showed me the layout of the pitching workouts and what we will accomplish. His plans as well as his baseball IQ are amazing. I’m very excited to have the opportunity to learn from him.”

“Coach Fecteau really impressed me on my visit this summer,” Havlicek said. “He had shown me all of his pitching philosophies and plans. Everything was written down day by day for pitchers, which was something that I really liked about him. He is extremely dedicated to his role as a pitching coach and is consistently finding ways to get better. Being that he is so young, I feel that he is very easy to talk to and I feel we could go on about pitching for hours. He is extremely knowledgeable. I am eager to work with him next year and have him mold me into the best pitcher I can be.”

Micheal Thomas, the Hokies’ volunteer assistant in charge of catchers, has also been a valuable tool in attracting catchers to the program. Taylor discussed his interactions with Thomas as the only catcher in the 2018 recruiting class.

“He [Thomas] was another big reason why I chose VT,” Taylor said. “None of the other schools that recruited me had a dedicated catching coach. I believe he can help me continue to develop the defensive part of my game, and I can learn from his experience as a former college and professional catcher.”

The recruits are excited, the coaching staff is excited, and the fans are excited for the changes coming to Blacksburg. The transition is happening, and now it’s time to see if the results follow.

“I think with coach’s vision for the program and the kids he is recruiting, we have a unique opportunity to be great and bring back a winning culture to the school,” said Madden.