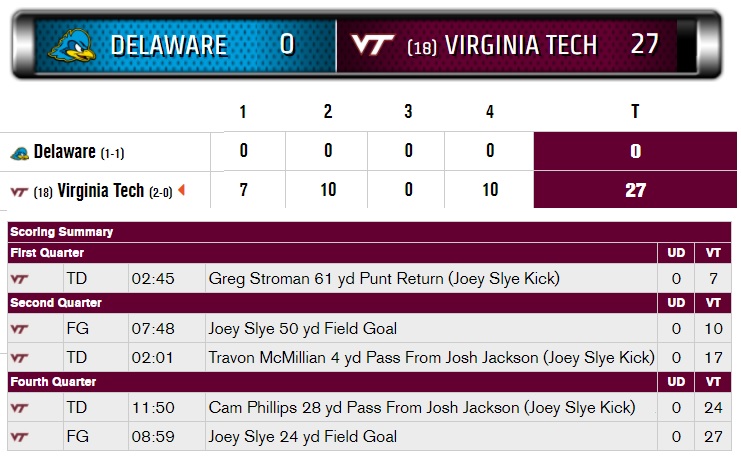 BLACKSBURG, Va. — After an exhilarating offensive performance just six days prior, No. 18 Virginia Tech stumbled vs. Delaware in a 27-0 win over the Blue Hens on Saturday.

“Delaware, defensively, has a fine scheme,” said head coach Justin Fuente. “They know it well and they execute it very well, and obviously gave us plenty of problems offensively.”

Josh Jackson looked uncomfortable at times, causing the offense to malfunction. Fuente said after the game that Virginia Tech’s missed opportunities for big plays hindered the offense. Virginia Tech took several shots downfield in the early going and after halftime, to Cam Phillips, Sean Savoy, James Clark and Travon McMillian. None of those connected.

“I would say in the first half, we missed several opportunities for big plays — that we didn’t execute very well but had a chance to be really big plays,” Fuente said. “Then, I would say that they handled us. All week, looking at their scheme and what they do, they lined up exactly how we thought they were going to line up, and they got after us pretty well. So those two things combined made it a tough day.”

While Virginia Tech’s offense struggled, the defense rebounded. The Hokies allowed almost 600 yards of offense vs. West Virginia, but played much better vs. the Blue Hens. Delaware relied heavily on the running game to move the ball, and failed to score despite getting into the redzone twice.

“That’s a big pride thing for the defense. Whenever they get into the redzone, we don’t want them to score,” said defensive tackle Ricky Walker, who registered four tackles and .5 tackles for loss. “And us, as a defense, whenever we get a shutout, that’s pretty big. Like Coach (defensive coordinator Bud Foster) said, that’s hard nowadays.”

Delaware moved the ball somewhat in the opening quarter, but failed to establish any consistency. Quarterback Joe Walker finished just 8-17 with 116 yards and an interception. Walker was sacked four times, and the Hokies held the Blue Hens to 107 yards on 46 carries.

“I thought we were just a little more fundamentally sound today, and obviously a totally different type of offense,” Foster said. “I felt like they were going to try and come in and make it a clock game, and run the football. They had not shown much last week running the quarterback, and that was the first thing they did, come out and run the quarterback. I felt they were going to do that. We made a couple of little adjustments and you take away a couple plays, I thought overall we played pretty solid.”

The Virginia Tech special teams also carried some water on Saturday. Greg Stroman returned a punt 61 yards for a touchdown in the first quarter, giving the Hokies some life. Oscar Bradburn looked good once again punting, finishing with five punts at 45.6 yards per punt. Stroman’s punt return, however, was the highlight of the game.

“Obviously Greg’s punt return was a huge play,” Fuente said. “I’m really proud of that whole unit. There’s a lot of guys on that unit, there’s 10 other guys and obviously Greg, that take a lot of pride in that. I really believe there were 10 other guys on the field that were just as happy for Greg as Greg was to score.”

“The guys did a great job of blocking, man,” Stroman said. “My teammates, they’re just as eager for me to score as I am. I give big thanks to them.”

Joey Slye’s accuracy remains an issue. Slye finished the day 2-4 on field goal attempts. Slye’s miss was from 51 yards, and another of Slye’s attempts was blocked. Slye did connected on field goals of 24 and 50 yards, the latter being a career high.

It was a rough first half for the Virginia Tech offense. Fresh off a 31-point performance against West Virginia, the Hokies struggled to move the ball at all vs. Delaware’s experienced defense. Virginia Tech punted on their first three possessions, and settled for a 50-yard field goal in the second quarter, giving them a 10-0 lead with 7:48 left in the half. The lone touchdown came from Stroman’s punt return.

The Hokies’ offense woke up on the next possession, driving 80 yards in six plays for a touchdown. Jackson went 4-4 for 73 yards through the air, and found Travon McMillian wide open for a 4-yard touchdown pass with 2:01 left in the half.

Even with a 17-0 lead heading into halftime, Virginia Tech was lucky their defense rebounded from their week one performance. Delaware’s offense struggled even more than Virginia Tech’s, totaling just 146 yards on 34 plays in the first half. Quarterback Joe Walker was 5-9 passing for just 68 yards, and the Blue Hens averaged just 3.1 yards per rush.

The third quarter was much of the same, for both teams. Virginia Tech caught a break midway through the quarter, as Tim Settle batted a pass that was picked off by Terrell Edmunds at the Virginia Tech 13. Edmunds returned 55 yards to Delaware’s 32-yard-line, giving the Hokies excellent field position. But Phillips fumbled on the very next play after making a 15-yard reception, giving the ball right back to the Blue Hens. Despite the fumble, Phillips still finished with six receptions for 90 yards and a touchdown. Check Family Fare Ad and Fareway Ad.

“I think those guys did a good job of changing up their looks,” Phillips said. “I know from the secondary, those guys changed leverages a couple times, starting inside and then moving outside. I think they did a great job preparing for us, watching film. They did have a little extra time, you know, more than we did, but those guys played well.”

Tech’s offense briefly woke up in the fourth quarter, as Josh Jackson found a bit of a rhythm. Jackson went 4-4 on the drive, including hitting Phillips on a 28-yard post route in the endzone. The throw gave Tech a 24-0 lead, ending any remaining doubt about the outcome. Still, it was a disappointing performance for the Hokies. Tech ran for only 81 yards on Saturday, and Tech went 3-11 on third down attempts.

“The way they line up their defense makes it hard to run the football,” Fuente said. “They just, you’re not going to get, it’s very difficult to get big plays running the ball. They do some things in the passing game and we just, for whatever reason, a myriad of reasons, we’re able to connect on those things, and I think in the first half, we just had plenty of opportunities for large plays. We just weren’t able to get it done.”

Even though the offense struggled, the Hokies sound optimistic regarding the future.

“Offensively, we just kept going,” Jackson said. “Things weren’t going too well for us, or how we wanted it to go, but I mean we kept pushing, we kept trying to get a drive together and get points. The defense, they played lights out. They kept us relaxed, they kept us cool because they just kept coming, kept coming every play. They did a great job. They obviously had our back on this one.”

“I think we all need to keep in mind he’s a freshman,” Fuente said of Jackson. “We’re awfully quick to anoint and tell people how great they are, and I think Josh has got a chance to be a very good player. It’s going to be an ongoing process. I know he’ll continue to work. I was pleased with how he battled and didn’t hang his head, so to speak. He just kept plugging away. I’m just as proud of him today as I was a week ago. We just need to play better.”

“I think we come out optimistic, only because we didn’t play well, but we won 27-0,” Phillips said. “I guess that would be more of a testament to our defense and how well they played. But as an offense, we’ll just go back to the drawing board, and work on our execution most definitely, and learn from the film.”

Defensively, it was a solid game. The defense created multiple scoring opportunities and shut the door on Delaware twice in the redzone.

“Well, it’s great that we played well, but this is a team,” Fuente said of the defense’s performance. “Whether it’s the special teams or the offense or the defense, we all work together, and finding a way to win the game is ultimately the goal. I’m not less happy with them a week ago than I am now. I like the way we’re preparing, I like the way we’re finding a way, at least in the first two weeks, to try and win a ballgame.”

Virginia Tech moved to 2-0 with their win over Delaware, and will take their show on the road next weekend. The Hokies will play East Carolina next Saturday, Sept. 16, at 3:30 PM (CBS Sports Network). East Carolina is 0-2 this season, and lost to West Virginia 56-20 on Saturday. 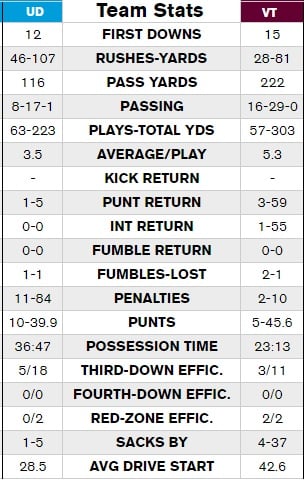 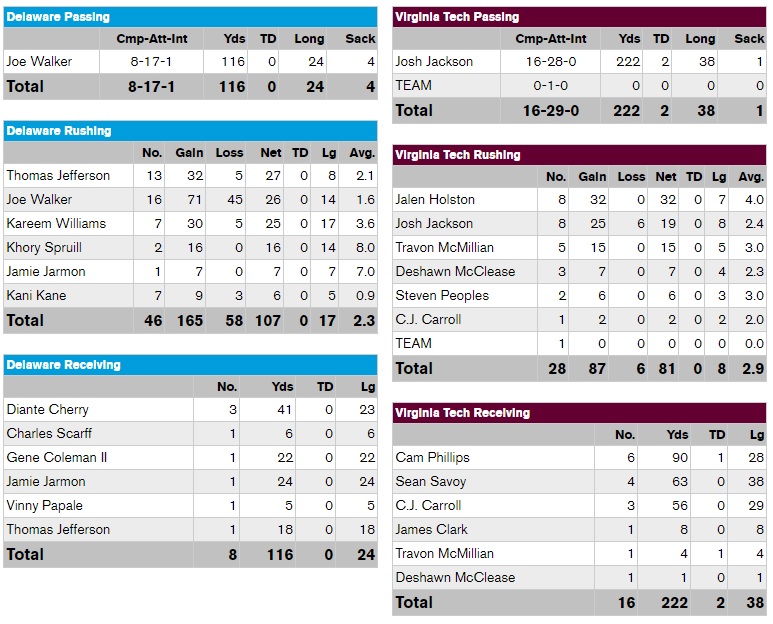