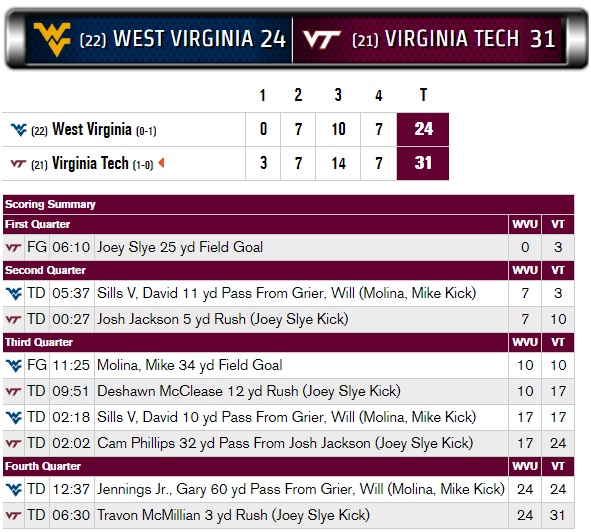 Landover, MD — The best football teams win because in certain situations, one side of the ball picks up another when they’re down. On Sunday night vs. No. 21 West Virginia, No. 22 Virginia Tech experienced that first-hand.

After a strong defensive showing in the first half, Virginia Tech’s offense found a rhythm in the second half and helped cement a 31-24 win over the Mountaineers at FedExField.

“I’m awfully proud of our guys,” said Virginia Tech head coach Justin Fuente. “I thought it was a well-played football game, for both teams. There was back and forth. Yards were hard to come by early in the game, and then it seemed like there was a spell there in the second half where both teams were moving the ball pretty well… I thought a bunch of people across the board contributed to this victory.”

Virginia Tech quarterback Josh Jackson led the way offensively, throwing for 235 yards and rushing for another 101 yards. Jackson found the endzone twice, once through the air and one on the ground.

“Well, he was pretty good,” Fuente said. “I thought he did a really good job. He has been good. He’s been a guy that’s done what we’ve asked him to do on a consistent basis, and he played pretty well tonight, on a big stage against a tough, hard-nosed football team.”

Jackson led an offense that struggled at different times. With the game tied at 24-24 in the fourth quarter, Jackson busted a quarterback keeper for 46 yards, setting up a Travon McMillian touchdown run.

“Impressive,” Deshawn McClease said of Jackson. “I felt like he was pretty slept on, like people tried to downplay his running ability. As you can see, he’s a pretty good runner.”

When it came down to it, Virginia Tech had to rely on its defense once more. West Virginia and quarterback Will Grier drove down to the Hokies’ 15-yard-line, but failed to get it in the endzone.

“Just trying to find a way to get a stop,” Fuente said. “We tried to use our timeouts to give our guys a break. I thought, I felt defensively, we expended so much energy in the first half, keeping us in the game that… it was just my feeling that we played a lot of football by the middle of the third quarter.”

While Virginia Tech’s defense came up big at the end of the game, the Hokies were gashed several times by Grier and the Moutaineers. Grier threw for 371 yards and three touchdowns, while running for another 52 yards. Grier did throw an early interception, but played incredibly well.

“They were hitting us early with some quick throws and then, they came out in the second half and threw a little bit more vertical throws and made a couple of nice throws an catches,” said defensive coordinator Bud Foster. “That is going to be part of the game. At the end of the day, we made enough stops to get the ball back to our offense and we did enough things as a football team to win the game, that’s the bottom line.”

“You could tell he was an experienced guy,” said Terrell Edmunds. “He was out there controlling the game and the receivers, they made some big-time catches. We also made some big-time stops, but that’s the good thing about playing against another good team. We had some big plays on our side of the ball, they might have some big plays, but you’ve got to just fight it out through the whole game.”

Virginia Tech and West Virginia both played a relatively clean game, especially for a season-opener. West Virginia turned it over one time, and the Hokies committed just five penalties for 34 yards.

“Well, it’s certainly what we’re talking about,” Fuente said on turnovers. “We made a big deal, not just about that, but about all the details that go into early games. Really, quite honestly, you didn’t see it from either team. I know we missed a couple field goals, but you didn’t see it.”

Those field goals would’ve made a big difference for Virginia Tech. Joey Slye, who is usually reliable inside 40 yards, missed kicks from 38 yards and 32 yards. The second miss would’ve given Virginia Tech a 10-point lead with less than two minutes left to play, but the Hokies responded nonetheless. The defense rallied, and was there to pick up Slye.

“I think our guys have a good understanding of there are going to be ups and downs in the ballgame,” Fuente said. We talk about it all the time, handling the ebbs and flows. If the offense scores immediately, it’s the talk about whatever happens out there, we’ve got to be ready to go again. The same thing defensively.”

The offenses struggled to start, which was no surprise. Virginia Tech held a 3-0 lead into the second quarter, until West Virginia found their rhythm. Running back Justin Crawford broke loose for 42 yards, leading to an 11-yard touchdown pass from Grier.

“We knew what kind of quarterback Will is,” Foster said. “I mean, he is a competitor, he has a live arm, his athletic. He showed all of those things tonight.”

“More than proud, I was awfully happy for him,” Fuente said of Jackson. “He’s worked awfully hard, and he found a way to be really efficient tonight.”

West Virginia tied the game on their first possession of the second half, but Virginia Tech’s offense was just finding it’s rhythm. Jackson found a wide-open Chris Cunningham for 39 yards, and Deshawn McClease capped off the drive with a 12-yard touchdown run, giving Tech a 17-10 lead with 9:51 left in the third. McClease finished the game with 51 yards on eight carries in his first game action in roughly a year.

“Coach just told us to trust our training, just to relax and play Virginia Tech football,” McClease said. “Everything pretty much worked out.”

The back-and-forth began late in the third quarter. West Virginia engineered a 8-play, 79-yard drive to tie the game at 17, only to be answered by a 44-yard kick return by James Clark. Jackson made short work of the possession, throwing a 32-yard pass to Phillips for the score.

“He said before the game, ‘I’ve got your back.’ When I was in doubt, and they were coming at me, I was throwing to Cam,” Jackson said. “I know he’ll go up and get it. If he doesn’t it’s probably going to be a penalty.”

Grier tied the game again in the fourth quarter, thanks to a 60-yard touchdown pass to Gary Jennings Jr. Two drives later, Jackson scampered for those 46 yards, giving the Hokies the lead for good.

“It was another read play, and we’ve been running that play for a long time,” Fuente said. “Sometimes you hit some big ones on the outside. Sometimes that quarterback just runs through there and hits air. He certainly did.”

Virginia Tech’s win over West Virginia keeps the Black Diamond Trophy in Blacksburg, and improves Justin Fuente’s record in season-openers to 4-2 in his career. Under Fuente, the Hokies are 4-1 in games decided by seven points or less.

The Hokies will continue their 2017 campaign vs. Delaware on Saturday, Sept. 9. Delaware might not be as good as West Virginia, but if the Hokies keep picking up their teammates when they are down, Tech should be competitive against everyone. 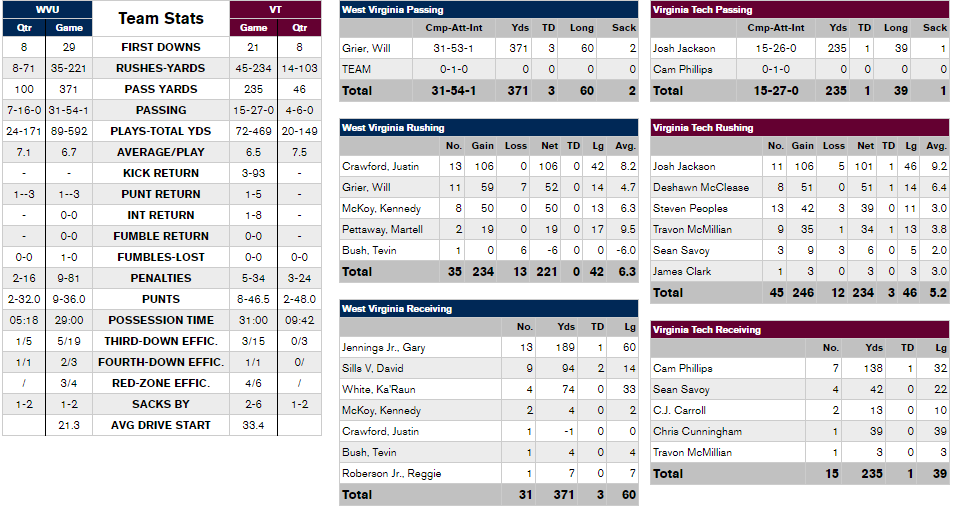