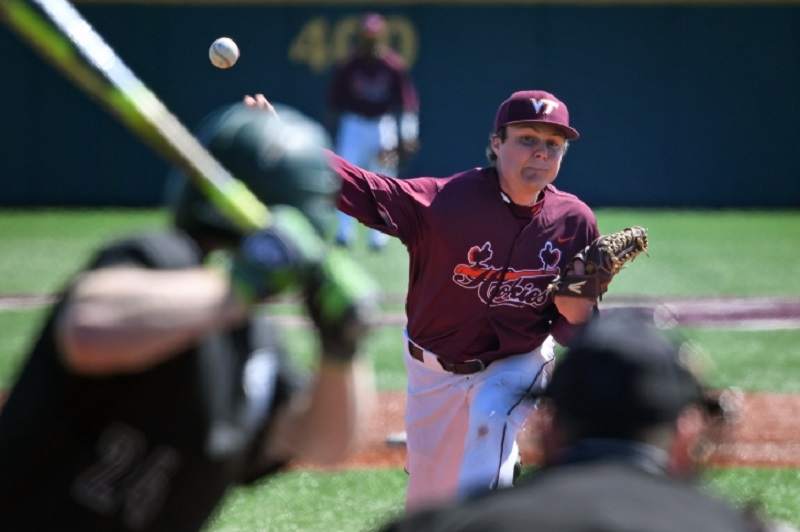 On a day when Mother Nature tried to have an impact in the game, it was ultimately Mac Caples’ bat that did the loudest talking. His go-ahead three-run home run in the seventh inning gave Virginia Tech (19-19, 7-11 ACC) the 7-5 lead and a win in the series finale against Virginia (29-9, 10-8 ACC).

The start time on Saturday was moved to 10 a.m. due to impending thunderstorms in the afternoon. In the eighth inning after Caples’ long ball put Tech in front, the thunderstorms arrived and caused a weather delay that lasted a little over one hour and 15 minutes. However, Tom Stoffel returned to the mound and closed out Hoos, earning his first save of the year. After the Hokies had dropped two one-run games earlier in the series, Saturday’s win was of vital importance.

“It was an important win, not because it’s Virginia, but because it’s an ACC conference game,” said head coach Pat Mason. “There’s a huge difference between going 0-3 in a weekend and 1-2. I think the character of our team and the core group of guys just don’t know anything else but competing, showing through in an important situation those last couple innings.”

In the end, it was one pitch and one swing that helped the Hokies avoid the sweep. As a senior, Caples relished the opportunity to come up clutch in such a huge moment against the in-state rival.

“They were throwing me a lot of soft stuff the whole game,” Caples said. “They threw me a change up, I found some barrell, and I was lucky and fortunate enough to put it over the fence…it’s definitely a momentum builder. It’s tough to win in the ACC and it’s always good to avoid a sweep, and I’m looking forward to next weekend.”

“Mac really swung the bat great this week too, starting at Radford,” Mason said. “Him and Coop both have been swinging the bat great this week. As a Virginia kid who chose to come here and come up with a big hit against our rival in a game that we must win, in that fashion I think it’s pretty cool for Mac because he works really hard. He deserves that type of moment.”

Tech was on the ropes through the first half of the game, largely behind the performance on the mound by Virginia’s Adam Haseley. Haseley had the Hokies’ hitters baffled at the plate all morning, giving up two runs (one earned) and striking out nine batters through six innings. He exited the game after throwing 96 pitches. Rahiem Cooper was one of the few Hokies to make solid contact, as his home run in the 5th inning gave him 10 for the year- an inordinately high number for someone batting last in the order.

“Jokingly, I said those strikeouts that he had worked against him,” Mason said. “They kind of worked in our favor. I would have preferred to have a lead, not really make that statement, but the reality is that the amount of strikeouts he accumulated ran his pitch count up and had to get them to the bullpen a little earlier than they were probably comfortable. Maybe that was our plan all along.”

On a day when he didn’t have his best stuff, Nick Anderson battled on the bump and tossed 5.1 innings, surrendering four runs and striking out two. The trio of Packy Naughton, Joey Sullivan, and Tom Stoffel gave up one run (zero earned) over the final 3.2 innings to keep Tech in the game and ultimately preserve the lead. As aforementioned, Stoffel was placed in a precarious situation, being on the mound when the game went into the weather delay and then returning afterwards to earn the save.

“It wasn’t too bad,” said Stoffel. “Good thing I had only thrown like six pitches before the break. Obviously if I would have thrown more, it would have been a little harder…they had a lot of lefties up, so obviously I had the advantage to go left on left there. I just wanted to pound them in and get them out.”

The win brings Tech back to the .500 mark at 19-19. Following a Tuesday matchup with East Tennessee State, the Hokies will host Georgia Tech in the weekend series, looking to firmly put themselves in good position to make the ACC Tournament in the stretch run.

“I told our guys that I think if we can play baseball consistently like we did for 28 innings this weekend, then we’ll have a very successful stretch run,” said Mason. “We have a lineup that can score. The pitching is coming together, our bullpen did a tremendous job all weekend. All parts are in place. If we can play confidently, I think we can make a good run here.”

On an emotional weekend leading up to the 10 year anniversary of the shooting that killed 32 victims, UVA showed that an act of unity can even be shared between two in-state rivals. The Cavaliers wore a special VT ribbon decal to honor the victims.

“Coach O’Connor is a first class person,” Mason said. “They run a first class program. Starting with him and all the way through his 35th player, we appreciated it and made sure our players and staff thanked them for doing that. It provides that perspective that two schools in a really great rivalry can put aside differences and agree on how important it is to honor and remember those 32 victims.”

Saturday morning was a day of reflection across campus. Over 16,000 participants ran in the 3.2-Mile Run in Remembrance, showing how far and wide the sense of Hokie pride extends. Then, Tech wore special uniforms with the ribbon emblazoned on the front, and the first responders, public safety, and medical personnel were honored.

“A day like today and a weekend like this, a reminder of how fragile life is and how small baseball is,” said Mason. “You want to perform. We wear the VT with pride. It means something. It means a lot more now than it did 11 years ago. Those events happening 10 years ago – an incredible place, an incredible community, it became even better somehow and someway. When you put on your uniform and you see a patch there, you obviously want to win a baseball game, but it seems kind of trivial in the moment. Any time you are wearing your colors, and when they’re orange and maroon, it’s important to wear them the right way. I think we did that today.”

Hokie Nation was alive and well on Saturday all throughout the community. As the 10 year anniversary arrives, it is never more evident that we have prevailed because we are Virginia Tech.