Fans of the really good teams start hashing out their NCAA seeding: 1st? 2nd? 3rd? And they start wondering where they’re going to be sent when the tournament pairings are set. If you’re a 1 or 2 seed, your chances of playing close to home are very good. If you’re a 3 seed or lower, you might be, for example, Virginia getting sent to play in Milwaukee … or worse.

Fans of the really bad teams are arguing about exactly how bad the records need to get before the coach is fired, and what his contract buyout is … those kinds of numbers, not the fun kind of numbers.

Fans of the mid-pack and bubble teams — that’s us — start obsessing about whether or not they’re even going to make the tournament. And that discussion hinges mainly on RPI.

Virginia Tech won two really exciting, really close games Sunday and Tuesday over Virginia (80-78 in 2OT) and Pittsburgh (66-63). And the effect of winning those two games was enormous on the Hokies’ projected RPI.

RPIForecast.com has a neat utility called RPI Wizard that enables you to change the results of games and see the effect on Tech’s projected RPI at the end of the season. RPI Wizard currently has the Hokies finishing the regular season 20-10 (9-9 ACC) with an RPI of 46. Given that the Hokies are 18-7 (7-6), RPIForecast.com thinks the Hokies will go 2-3 the rest of the way.

But what happens when you start changing the UVA win to a loss, or the Pitt game to a loss, or — worse yet — both games to losses? (These scenarios still include a 2-3 finish the rest of the way.)

Those two Tech wins in three days made a huge difference in projected RPI (not to mention the records look a lot different). It puts us in a weird position here at TSL; we’re always telling you not to freak out over individual games … but on the other hand, when you get down to the nitty-gritty, individual games do matter.

Individual plays matter. What if London Perrantes’ layup that wound up sitting on the rim — one of the signature plays of the season — had fallen in, and Virginia had won?

What if Pittsburgh had made one of those three desperation three-pointers they threw at the basket in the last 12 seconds, forcing the game into overtime?

What if Chris Clarke had landed cleanly on his knee with 9:49 to go against Virginia, and the Hokies had him for the rest of the season? Is that going to be the difference in making or not making the tournament?

It’s hard to believe you can play 30 games and at least one ACC Tournament game over the course of four months — that’s at least 1,240 minutes of basketball — and perhaps a layup that sat on the rim is the difference between going to the tournament and not going. A moment in time can alter the course of a season.

It works both ways. What if Justin Robinson had successfully kept the ball away from Notre Dame’s Matt Farrell with 46 seconds left, and had dished to Justin Bibbs for a game-tying three-pointer instead? If Tech had won that game, their projected record would be 21-9 (10-8) with an RPI of 33 (vs. 46 with the loss). The Hokies might be projected as a 6 or 7 seed, instead of the kiss-of-death-in-the-second-round 8 or 9 seed.

Maybe that’s why I live and die with every play as I watch close basketball games. Because at any given second, the play that alters the course of a season could occur.

Breaking it Down Without Chris Clarke

The Pittsburgh game was Tech’s first full game without Chris Clarke, and it might give us an indicator of how the rest of the season will go, with regards to who plays and how much.

First of all, Khadim Sy only played 9 minutes, 3 fewer than his season average (12). So no movement there. Sy actually played more minutes against Virginia (17) and Miami (10).

Here’s how it broke down overall — everyone’s minutes against Pitt, and the difference between that and their season average.

Chris Clarke was averaging 29 minutes a game, and Justin Bibbs, Ahmed Hill, and Ty Outlaw were a combined +24 in minutes played against Pitt.

This is not a revelation. Clarke is a wing, and Bibbs, Hill, and Outlaw are all wings.

The Clutchness of Seth Allen, and how Bibbs and Hill Can Help 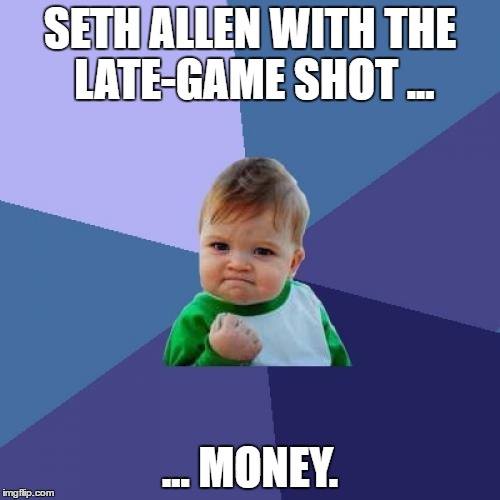 Seth Allen has always been the guy who wants to take the key shot at the end of the game, like his game-ending 3-point attempt at Notre Dame last year, which rimmed out in a two point loss. Or his two straight makes late in this year’s Michigan game that turned a one-point deficit into a four-point Hokie lead with a minute left. Or his layup with 15 seconds left to go to beat Georgia Tech.

In this week’s game against Virginia, with the scored tied in regulation, Seth Allen took — and missed — three shots in the last minute. He missed two three-pointers in the last 1:28 of the first overtime, and then he finally hit the game-winner in the lane with three seconds left in the second overtime.

Against Pittsburgh, he hit a clutch three-pointer with 1:08 left to go that capped five straight points by the Hokies and gave Tech a 64-63 lead they never relinquished.

Seth Allen is doing what you love your senior guards to do: be The Man, and make game-winning plays. Michigan, Virginia and Pittsburgh had no answer, and those are three huge wins for the Hokie program this year.

Ahmed Hill‘s performance against Pittsburgh was especially encouraging, because in the previous eight games, he made 3 of 25 three-pointers. Every time I type that stat, I double-check it, because it sounds preposterous. That’s Dorian Finney-Smith-like. In over four weeks, Hill had made just three 3-pointers, but in two hours against Pitt, he made three more.

Chris Clarke’s loss stings, but what I’m waiting for is Bibbs and Hill to go something like 4-6 and 3-6 respectively in the same game, as they did against Duke (6-9 combined). If they can pull that off, and Seth Allen can keep being clutch, and Zach LeDay can keep being Zach, the Hokies can win some more games, even with Clarke out for the year.

In the meantime, enjoy the ride! The Hokies are in the mix for an NCAA bid.