Virginia Tech blew a 17-point lead on Friday night and lost in the semifinal of the DirecTV Wooden Legacy to Texas A&M 68-65.

The Hokies held a 53-36 lead early in the second half, but couldn’t close the door on Texas A&M. The much taller and longer Aggies owned the boards 49-30 and consistently scored inside. Virginia Tech relied on the outside shot and had success in the first half, but finished at just 37.9 percent from behind the arc.

Ahmed Hill led the Hokies offensively with six three-pointers for 18 points. Justin Robinson finished with 14 points and five assists. Seth Allen was the only other Tech player in double figures with 10 points. DJ Hogg came up big for Texas A&M in the second half, finishing with 17 points overall and 10 rebounds. Three other Aggies finished in double figures. 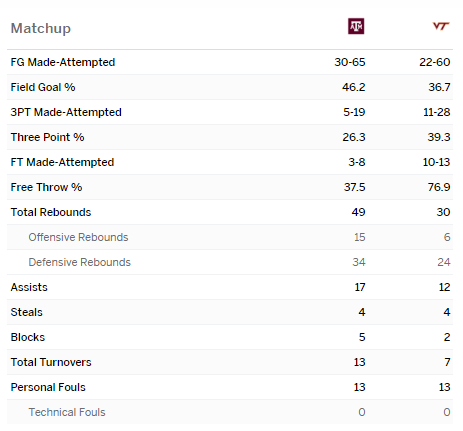 Virginia Tech came out firing offensively, taking loads of perimeter shots in order to break down the Texas A&M zone. The Hokies jumped out to a 17-9 lead with 12:19 remaining in the first half, in large part due to a rash of Aggie turnovers.

Tech’s hot shooting streak slowed later in the half, allowing Texas A&M to inch closer and closer. The Aggies went on a 7-0 run to cut the Hokies’ lead to 19-18 with 8:28 left in the half.

The two teams traded baskets as neither team could find a definitive advantage. Virginia Tech held up on the boards in the first half, despite Khadim Sy sitting on the bench for most of the latter part of the half with two fouls.

The Hokies extended their lead as the half closed. Justin Robinson scored the final six points for Virginia Tech in the first half, giving the Hokies a 38-25 lead at the break.

Zach LeDay cut the lead to one on the ensuing possession, but a Hogg jumper gave Texas A&M a 68-65 lead with 31 seconds left. Seth Allen missed his three-point attempt on the Hokies’ next try, allowing A&M to hold onto the win.

Virginia Tech is now 4-1 this season. Tech got a quality win vs. New Mexico on Thursday and nearly picked up another win vs. the Aggies. The Hokies will play either UCLA or Nebraska on Sunday, depending on the results of their game on Saturday.