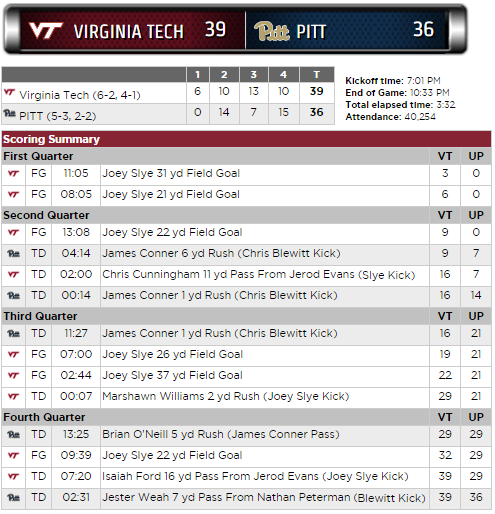 Pittsburgh, PA (Heinz Field) — For once, it wasn’t all on the Virginia Tech defense to finish a close game.

Virginia Tech stormed back in the third quarter after surrendering the lead, and thanks to impressive performances from Joey Slye (six field goals) and the offense, the Hokies held off the Pittsburgh Panthers 39-36.

The win marks the first time Virginia Tech has left Heinz Field victorious in five tries dating back to 2001. Though the defense struggled to slow down Pittsburgh, the Hokies amassed 556 yards of offense and Isaiah Ford, Cam Phillips and Bucky Hodges all had over 100 receiving yards. Jerod Evans played well too, throwing for 406 yards, two touchdowns and running for another 33 yards.

Virginia Tech’s offense took advantage of Pittsburgh’s decision to stack the box and play man coverage on the outside. Throughout the game, Evans threw 50-50 balls to his receivers, usually resulting in a reception.

“They don’t give you a whole lot of choice with the way they play,” Fuente said. “I thought our guys accepted the challenge, they knew that going in. It certainly wasn’t a surprise.”

Virginia Tech’s 556 yards followed 523 yards against Miami last Thursday, making it the first time the Hokies have gone over 500 yards in consecutive games since the 1999 Sugar Bowl (503 yards) and the 2000 opener against Akron (549 yards).

Pittsburgh’s offense had plenty of success themselves, racking up 458 yards. Pittsburgh ran for 180 yards, 141 by James Conner alone. Conner ran for three touchdowns as well, on 19 carries.

“He’s playing with a new lease on life,” said Virginia Tech defensive coordinator Bud Foster. “He’s playing hard. He always has, They did a nice job seeing what we were doing and how we were trying to take away their jet sweep and kind of countering, running back away from it.”

Virginia Tech’s offensive success started early. Evans engineered a 10 play, 76 yard drive that ended up inside the Pittsburgh 15-yard-line. The Hokies stalled in the redzone and were forced to settle for a 31-yard field goal from Slye to go up 3-0. The struggles in the redzone would persist all game.

Pittsburgh’s dangerous returner Quadree Henderson fumbled on the ensuing kickoff, putting the Hokies inside the Panthers’ redzone. The offense couldn’t capitalize, and Slye’s second field goal of the game gave Virginia Tech a 6-0 lead before Pittsburgh’s offense even saw the field.

The Panthers’ first drive didn’t end well. Facing a second-and-15, Nathan Peterman was picked off by Mook Reynolds at the Pittsburgh 30-yard-line, once again giving the Hokies terrific field position. The Hokies proceeded to lose four yards in three plays and thanks to a windy Pittsburgh evening, were forced to punt from the 34-yard-line.

Evans said after the game that the team’s struggles in the redzone were frustrating.

“For somebody that loves to score touchdowns, put up a lot of points, extremely,” Evans said. “That’s the way it is.”

Tech’s redzone struggles continued in the second quarter, as Virginia Tech was stopped at the Pittsburgh 5-yard-line. Slye tacked on another field goal, giving the Hokies a 9-0 lead.

Two drives later, the Panther offense kicked into gear. Peterman completed five straight passes, including a 37-yarder to Henderson, and Conner capped it off with the touchdown to cut Virginia Tech’s lead to 9-7 with 4:14 left in the half.

The Hokies answered on their next possession. Evans found Phillips and Hodges for gains of 18 yards each and this time in the redzone, Tech punched it in with an Evans pass to Chris Cunningham, giving Virginia Tech a 16-7 lead.

Pittsburgh kept the reeling Hokies’ defense off guard on the next drive with a 71-yard pass to Scott Orndorff. Pitt finished it off with Conner’s second touchdown of the game, and the Hokies held a slim 16-14 lead heading into halftime.

“We knew it was going to be a 60-minute fistfight and it was,” Foster said.

The fight continued in the second half, when Conner broke loose for a 37-yard run down the Hokies’ 5-yard-line. Conner ran for his third touchdown of the day, giving Pitt their first lead of the day by a score of 21-16.

“He’s got size and speed, power,” Fuente said. “It’s very hard to tackle him with one person. They are very good on the offensive line, but James Conner is a darn good football player.”

Virginia Tech settled for another field goal on the next possession and thanks to a rare stop from the defense, the Hokies took over with 4:47 left in the third quarter to regain the lead.

“We saw it all, but our kids hung in there,” Foster said. “There’s going to be some games like this. Coach Fuente told when he offered me the job that I wouldn’t have to play perfect defense all the time and it was one of those nights.”

The Hokies drove down for another Joey Slye field goal, giving Virginia Tech a 22-21 lead. The Hokies defense, needing a stop, forced a Pittsburgh three-and-out.

Virginia Tech expanded the lead on their next drive. Evans hit Phillips on another 50-50 ball for 37 yards down to the Pittsburgh 2-yard-line. Marshawn Williams capped it off with a run from there, and Tech took a 29-21 lead.

True to the back-and-forth nature of the game, Pittsburgh answered Tech’s score. The Panthers ran a trick play to offensive lineman Brian O’Neill for a 5-yard TD, O’Neill’s second touchdown of the season, and after a two-point conversion, the game was once again tied at 29.

The Hokies went into the redzone again on their next drive, but once again failed to get past the goal line. Though it was a disappointment at the time, Slye kicked his sixth field goal of the game, this time from 22 yards, and gave Virginia Tech a 32-29 lead.

Slye’s six field goals set a record for the most in school history. Slye, a Pittsburgh Steelers fan, said that kicking at Heinz was a dream come true.

“I know a lot of kickers have struggles, especially going to the river, that’s kind of like a known fact,” Slye said. “I think I hit four into the river today. Just kind of an awesome experience for me and my family to be able to kick here.”

The Virginia Tech defense was far from perfect on Thursday night, but it stepped up when needed. Tech forced a three-and-out and Pittsburgh was forced to punt with 7:51 left to play.

Evans, who left the game in the third quarter due to an ankle injury, put the game on ice on the next drive. He completed a 41-yard pass to Phillips and then a 16-yard touchdown to Isaiah Ford, giving Tech a 10-point lead with 7:20 to go. The touchdown was Ford’s 23rd career touchdown reception, which breaks Antonio Freeman’s record of 22.

“This one was a long time coming,” Ford said. “I was just ready to get it over with. It couldn’t have happened at a better moment.”

The Tech defense allowed another touchdown with 2:31 left in the game, but Virginia Tech ran out the clock on the last possession. Cam Phillips took a jet sweep on 3rd and 1 from the Virginia Tech 27 with 2:14 left, eluded a defender in the backfield, and lunged to just barely pick up the first down. From there, the Hokies ran out the clock.

The win puts Virginia Tech at 6-2 on the season and 4-1 in the ACC. The Hokies now hold tiebreakers over Pittsburgh, Miami and North Carolina, who is the only other team with one conference loss.

The team all season has tried to downplay their success, but after Thursday night’s win, they couldn’t help but wonder how well the season could end.

“We’re going to take it one game at a time,” Foster said. “That’s all we can do. We’ve got a lot of big football games ahead.”

“We just can’t get too ahead of ourselves,” said defensive end Ken Ekanem. “We’ve got to take it one game at a time, but yeah, that was a big thing in my recruiting, competing for the ACC Championship, representing our side of the conference. It’s a great feeling and we’re heading in the right direction.”

Tech is now 2-1 on the road this season and two of their remaining four games are away from Lane Stadium. The Hokies will play Duke in Durham, NC next week before returning to Blacksburg to face Georgia Tech. 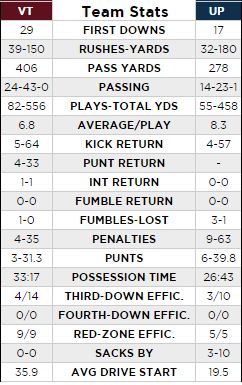 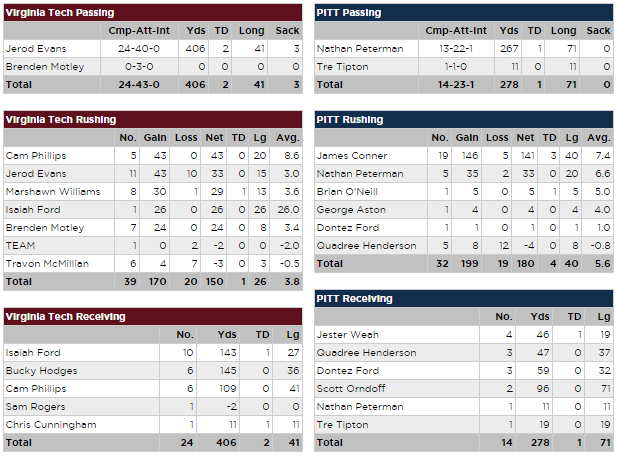