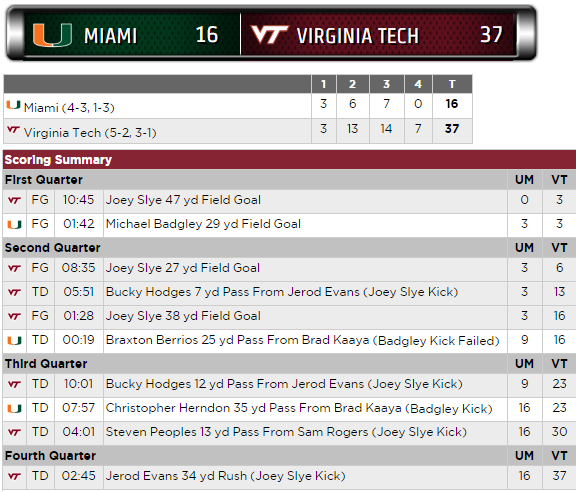 BLACKSBURG, VA. — Down two starters on the defensive line, the Virginia Tech defense put together one of their best performances all season in a 37-16 win over Miami at Lane Stadium.

The Hokies registered eight sacks, 12 tackles for loss and held the Hurricanes to just 3-of-15 on third down conversions. Virginia Tech did all of this while missing Ken Ekanem and Nigel Williams, two senior starters on the defensive line. Miami struggled to run the ball as well, averaging just 1.4 yards per carry.

“I felt like, obviously the key to the game is that we needed to stop the run and make Miami one dimensional, and we were able to do that,” Foster said. “I know they have two dynamic running backs that if you give them a crease, as you guys saw there at the end, they’re very explosive and tremendously talented. We really did a great job of attacking the line of scrimmage, keeping the lanes and the gaps tight and keeping those backs in a phone booth, so to speak.”

The Virginia Tech offense showed up as well, especially on the ground. The Hokies ran for a season-high 251 yards, thanks to big efforts from Travon McMillian and Jerod Evans. The two ran for 131 and 98 yards respectively, while Evans added 259 yards and two touchdowns through the air.

“Yeah, I thought Travon ran hard,” Fuente said. “Marshawn (Williams) didn’t have as many carries, but he had a few and he got in there and did a pretty darn good job as well.”

Both defenses controlled the game early. Although Virginia Tech mustered a 47-yard field goal from Joey Slye on the opening possession, the Hokies struggled for the rest of the quarter. The Hurricanes weren’t much better, allowing a sack on two of their three first quarter possessions.

Miami had a chance to strike early but failed to capitalize. Thanks to a broken coverage, quarterback Brad Kaaya found tight end David Njoku wide open down the sideline for what should have been a touchdown. Instead, Njoku tripped after catching the pass and the Hurricanes were forced to settle for a field goal.

After trading punts to open the second quarter, Virginia Tech retook the lead with another field goal with 8:35 remaining in the half, giving the Hokies a 6-3 advantage. Miami’s next possession went nowhere, and the Hokies capitalized. Evans found Mr. Do-It-All Sam Rogers over the middle of the field, who proceeded to bob and weave his way through the secondary en route to the Miami 7-yard-line. Evans capped off the drive with a touchdown pass to Bucky Hodges, his first of the evening, giving Tech a 13-3 lead with 5:51 left in the half.

The Virginia Tech defense made another stand and the Hokies padded their lead with another Joey Slye field goal with less than a minute and a half to play. Broken coverage haunted the Hokies again on Miami’s final possession of the half, as Kaaya found Braxton Berrios for a 25-yard touchdown, cutting into Tech’s lead. Miami missed the extra point, but it didn’t matter.

The Hokies blew the game wide open on their second possession of the second half. McMillian led off the drive with a 20-yard run, and Evans found Hodges for another touchdown, giving Tech a 23-9 lead. Hodges would finish with seven catches for 66 yards and two touchdowns.

“They were really focused in on Isaiah (Ford),” Fuente said. “We felt like we needed to move him around a little bit. Our general philosophy is that we should be able to take whatever the defense gives us. If that means that Cam (Phillips) gets catches, or Bucky gets catches or we have to run the ball more, whatever it is, you’ve got to feel good about those other guys if you’re having a hard time getting the ball to Isaiah.”

Virginia Tech’s third broken coverage of the night led to another Miami score, but that would be it for the Hurricanes. The Hokies would get to Kaaya four times from the end of the third quarter to the rest of the game. The whole gang got in on the fun. Woody Baron led the way with 2.5 sacks and 4.5 tackles for loss, while Vinny Mihota, who returned in the second half after a dislocated shoulder, registered two sacks.

Baron said after the game that he knew with Ekanem and Williams out, he needed to step up his play.

“I thought it was implied,” Baron said. “All four of us, all six of us in the rotation had to have a good game and me being the most experienced, I knew that our young guys were going to follow my example.”

“Yeah, I mean he’s playing great football,” Foster said. “Not good football, he’s playing great football. You talk about a guy, obviously he has abilities — he’s twitchy, explosive off the ball, plays with great hands, great technique, he’s a powerful kid, can get off of blocks… but he recognizes play-side and back-side right now and can flatten out and those types of things.”

“It was an issue not having Ken and Nigel,” Fuente said. “They both play at a high level and have played a lot of football for us. I was really proud of the guys who filled in. They had been playing better as the season went along. I kind of always refer to what we said when the season started. We knew we were going to have challenges like that and the mark of our team’s potential would be made on how well the guys who fill in for them play.”

One of the young guys who stepped up was redshirt-freshman Trevon Hill, who started in place of Ekanem. Hill flew back home on Tuesday to be with his family after his grandmother passed away and didn’t return until Wednesday. He stepped up, registering 1.5 sacks and five tackles.

“Trevon has a lot of character, and it’s good to see him get out there play the way he did with that passion and emotion, and I know it meant a lot to him,” said Sam Rogers.

“We found out about it about a week, week and a half ago and we all just rallied around him,” Baron said. “For him to go through something like that and to come back and even play in a game, that’s humongous. That speaks to him as a young man, his character and also this unit as a family.”

“I really appreciate what our kids are all about and how we fought after a disappointing loss, we came back and prepared, and where our intensity and our focus was in practice and our intentions in a must-win situation,” Foster said. “I’m really proud of the way they worked and it showed in our play.”

The offense found its rhythm in the second half. Holding onto a 23-16 lead with 7:57 left to play in the third, Virginia Tech orchestrated an 11-play, 75-yard drive that ended in a trick play that had Rogers throwing a 13-yard touchdown pass to Steven Peoples, giving the Hokies a 30-16 lead.

“In practice, I overthrew him a couple times,” Rogers said. “I was really nervous about it, but luckily it worked out.”

“Yeah, those are things that we have been carrying,” Fuente said. “We’re always going to carry something. We may not call it every week, the situation may not present itself. You’ve got to be in the right situation.”

Rogers said that Fuente gave him plenty of flak for his failed trick play attempt in Virginia Tech’s bowl game vs. Tulsa last season, but was happy that Fuente called his number.

“When I threw that duck, he reminded me of that one of the first times I met him,” Rogers said. “He said, ‘Yeah, you don’t have to worry about throwing the ball for us.’ Turns out, he was wrong.”

With the defense firing on all cylinders, Virginia Tech finished off the ‘Canes in the fourth quarter. Evans added a 34-yard touchdown run with 2:45 left to play, effectively ending the game.

This is the second time the Hokies have bounced back from a loss with a resounding win. After a deflating 45-24 loss to Tennessee in the Battle at Bristol, the Hokies pummeled Boston College 49-0. Last week, the Hokies lost to unranked Syracuse 31-17.

“The guys are very resilient,” Evans said. “We know we didn’t play our best game against Syracuse. We had a horrible taste in our mouth, and what better way to do it with a short week, a Thursday night game five days later to get that taste out of your mouth. It’s all a credit to the leadership that we have on this team and the resiliency that we have.”

“I do know that we didn’t have time to dwell on what happened last week,” Fuente said. “As much as we didn’t like it, we had to pour all of our focus into the game, because it was coming quickly. I felt good about our plan, the way we practiced heading into the game. I felt confident in our ability to attack the short week. I think our kids sensed that and kind of accepted the plan, digested the plan, in terms of what we were going to do offensively and defensively, and they went out and executed pretty well.”

Tech’s game vs. Pittsburgh is also a Thursday night game, but at Heinz Field, where the Hokies have never won.

“It’s going to be a big-time football game up there,” Foster said. “They’re fast and physical, and we need to go turn around and play another great football game against an outstanding football team.” 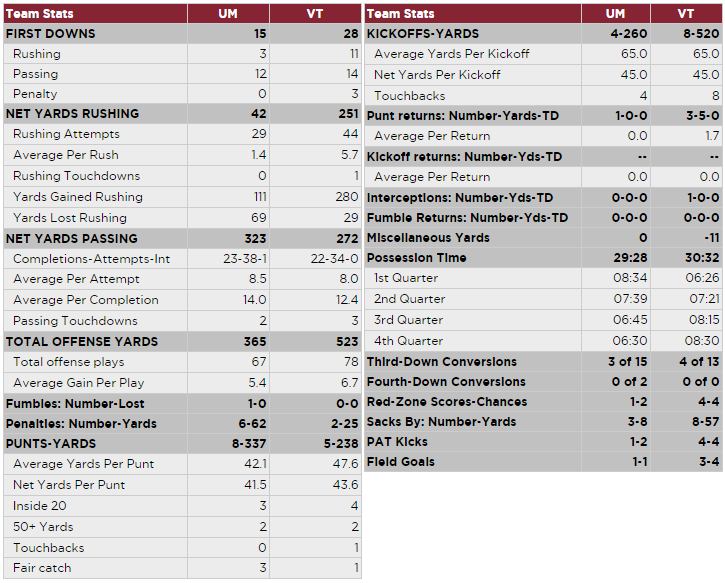 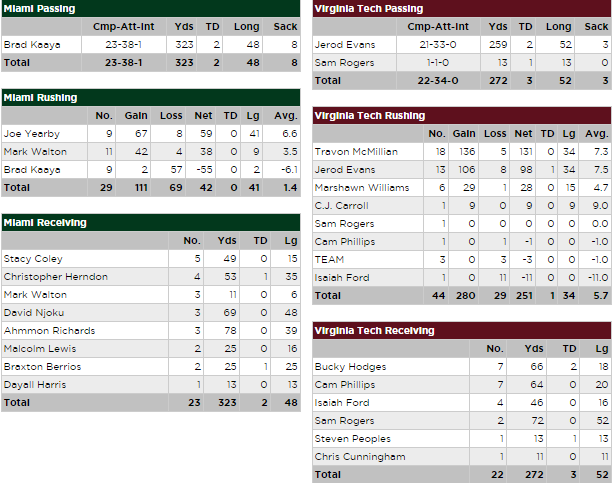