Well, it’s that time of year.

Virginia Tech will actually play a real football game this week, as the Hokies open their first season under Head Coach Justin Fuente vs. Liberty on Saturday.

“They’re a talented team, they have good players on both sides of the ball,” Fuente said. “They’re a program that has had very good success in the last couple of years. They have an athletic quarterback and a sound, physical defense.”

Fuente, who has spent the entire offseason installing his new offensive scheme, says that Liberty’s defense doesn’t beat themselves.

“They’re a four-down team that’s not afraid to pressure,” Fuente said. “They’re incredibly sound in all of their schemes, that’s a thing that jumps out at you when you start to watch the film. They can run in the back-end, they’ve got a couple guys who can rush the passer. They’re a well-coached defense that’s incredibly sound in what they’re doing. They don’t turn guys loose or bust coverages, they are well-schooled in their scheme.”

Defensive Coordinator Bud Foster is in his 30th season at Virginia Tech, but is also doing some things differently with his defense. Foster said that Liberty’s offense revolves around their skill players, as well as quarterback Stephon Masha.

“He’s more athletic, can run the ball, he’s more dynamic with the ball in his hands whereas the quarterback they had last year was more, throwing the ball was his strength,” Foster said. “This kid can do a little bit of both, and that’s where the challenge is going to be, how they’re going to set their offense up so they can run the quarterback.”

Liberty Offensive Coordinator Joe Dailey was promoted to the position this past offseason, and Foster sees a lot of what Liberty wants to do offensively as being similar to what the Flames and Head Coach Turner Gill did last season.

Virginia Tech also released their first depth chart since the end of last season. Many things were expected, but some weren’t expected as much. 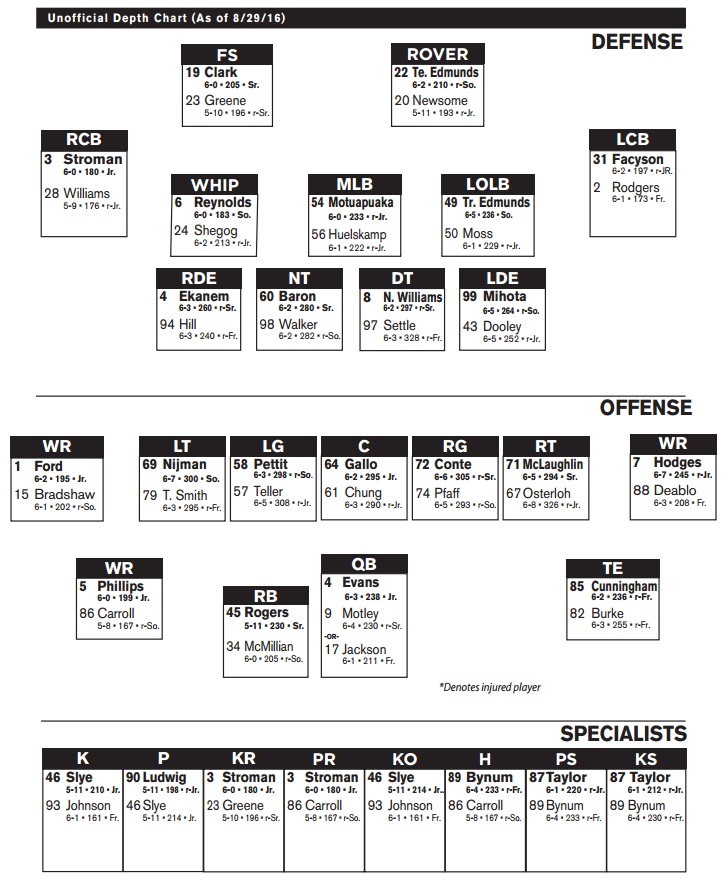 Defensively, there are a couple of names that we haven’t seen often. Curtis Williams and Tyree Rodgers are listed as the backup cornerbacks to Greg Stroman and Brandon Facyson. Williams, who joined the team as a walk-on, played sparingly against Furman last season, while Rodgers is a true-freshman.

Foster said that Rodgers has done very well since joining the team.

“Tyree is really a guy that I’ve been pleased with,” Foster said. “Is he ready to play yet on a consistent basis? I’m not sure, but I like where he will be in a few weeks.”

Stroman, who has moved around a lot since coming to Blacksburg, has progressed enough to start at cornerback in his third season.

“I thought he had an outstanding spring and had an outstanding camp,” Foster said. “He’s going against Bucky Hodges, Cam Phillips and Isaiah Ford every day, and those guys in my opinion are outstanding football players, and he’s doing a great job competing with those guys. I really trust him. He’s improved leaps and bounds as a corner and I’m excited about what he’s going to bring to the table defensively.”

“Off the field, Stroman is probably one of my closest friends on the team. On the field, it’s like we hate each other,” Ford said. “We’re always going at it and getting in scraps and things like that, but I’ve seen him develop tremendously as a corner.”

Another name in the secondary to keep an eye on is Mook Reynolds, who is listed as the starting whip linebacker (in Reynolds’ case, nickel is probably the more appropriate term) for Virginia Tech. Reynolds, who played almost exclusively as a nickel last season, moved to safety in the spring. However, Foster says that Reynolds’ versatility allows the Hokies to use him in multiple positions on the field.

“I like Mook where he is right now,” Foster said. “I think he can be versatile as a whip and as a nickel. I think as we move forward, as we have different personnel groupings, I think you’ll see Anthony in there more, when there are multiple tight ends or multiple back looks. Mook right now gives us that versatility to do both. I think that’s a positive for us, from a standpoint of we’re not sending up a red flag when we’re getting into our nickel package or doing things of that nature. Sometimes that happens when you start substituting packages and then offenses can have a plan on how they want to attack you.”

There aren’t any surprises at the other linebacker spots, where Andrew Motuapuaka and Tremaine Edmunds are slated to start. At defensive tackle, Woody Baron and Nigel Williams will start with Ricky Walker and Tim Settle coming in off the bench.

At defensive end, Ken Ekanem and Vinny Mihota will start. Behind those two, Trevon Hill and Seth Dooley fill out the two-deep.

Dooley, a redshirt-junior, had shoulder surgery after the season, which kept him out of spring drills. Foster said that Dooley had to take some time to catch up with the team after sitting the spring out.

On offense, there’s plenty to talk about. Both Brenden Motley and Josh Jackson were listed as the backup quarterbacks, while Sam Rogers was listed as the starting running back ahead of Travon McMillian.

However, Fuente said that people shouldn’t read too much into it, saying that a lot of it depends on which formations and personnel groupings the Hokies run.

“What I would say is, it’s all personnel group oriented,” Fuente said. “In certain personnel groups, Sam may be in there and Travon might not be. In another personnel group it may be flipped. When you release a depth chart, you have to take it all with a grain of salt, particularly offensively and like we talked about last week, even defensively a little bit now. If you put a depth chart up there of every personnel group you had, you would have a bunch of starters.”

On the offensive line, Colt Pettit is listed as the starting left guard ahead of Wyatt Teller. Fuente told the media last week that Teller had been working with the second unit and that doesn’t seem to have changed.

At wide receiver, Isaiah Ford and Cam Phillips are listed as starters, as well as Bucky Hodges. Hodges is technically listed as a tight end, but it comes as no surprise that he’ll be used as a wide receiver in many situations.

Behind those three, Jaylen Bradshaw, Divine Deablo and CJ Carroll are the next men up. Fuente said that all three have really embraced and taken advantage of the open playing time at the position.

“At times they’ve looked good, at times they’ve looked young and inexperienced,” Fuente said. “I like the way they’ve gone about their work on a daily basis. They’ve continued to try and improve. There’s a lot to this, in terms of playing wideout. There’s a lot more than running a post route and catching a ball, in terms of leverages when blocking on the perimeter and those guys are still learning those things.”

Special teams player to wear No. 25 each week to honor Beamer

Fuente also announced on Monday that Virginia Tech will designate one special teams player to wear No. 25 each week, in order to pay tribute to former Head Coach Frank Beamer, who retired after last season.

Fuente said that he approached John Ballein, the senior Associate Athletics Director for Internal Operations and Sports Performance. Ballein is more noted for working as the Director of Football Operations under Beamer from 2000-2015. Fuente then met with Director of Athletics Whit Babcock, as well as the current coaching staff before making it official.

“It’s something that I think shows great pride to the past and pays tribute to the way ball was played around here for some time,” Fuente said. “It’s something our kids are excited about as well.”

Fuente said that a different player will wear No. 25 each week and that he has yet to decide who will wear it for the Liberty game.

“He’d be thrilled to be honored with that kind of recognition,” Foster said. “With somebody wearing that jersey, I think it kind of makes a big statement, tying the old with the new and us keeping the tradition of being dynamic on special teams.”

Isaiah Ford also said that it’s important to pay homage to Beamer, who helped guide the program to national prominence.

“I think it’s special,” Ford said. “Everyone knows what Coach Beamer means to this program and to me, individually and the effect he had on my life. I think that’s a cool tradition to carry on and honor him on the field.”