UCLA leads Virginia Tech 14-7 at half time of the Sun Bowl. The big stories are an injury to Logan Thomas, who left the field with about nine minutes to go in the second quarter, and 186 yards rushing on just six carries by UCLA quarterback Brett Hundley, whose 86-yard scramble in the second quarter is currently the margin in the game.

Thomas’ injury has been described as a stinger, coming on a hard hit from UCLA linebacker Jordan Zumwalt, and it is unknown if he will return for the second half.

UCLA has outgained the Hokies 275 to 197 yards, due to Hundley’s scrambling with the football. The Hokies have run 36 plays to 35 for the Bruins, in a game that is very even statistically. Logan Thomas, before exiting the game, was just 3-11 for 45 yards, and his replacement, Mark Leal, is 4-5 for 46 yards.

This game got off to a rough start for the Hokies. UCLA marched right down field and scored a touchdown with their first possession, taking advantage of three penalties by the Hokie defense (two offsides, one hands to the face personal foul). The Bruins went 74 yards in just five plays to go up 7-0.

The Hokie offense “responded” with a three and out, giving Hokie fans reason for concern, but things settled down after that. Tech tied it at 7 with a 2-yard rush by J.C. Coleman with 8:14 left in the first quarter, following a 37-yard pass down the middle by Logan Thomas to tight end Kalvin Cline.

That was Thomas’ second completion in four attempts, but he missed his next six throws, as the Hokies offense went quiet.UCLA threatened late in the first quarter, but Ka’imi Fairbairn missed a 36-yard field goal.

Early in the second quarter, as Thomas completed a short pass to Joshua Stanford, Thomas was blasted in the chin by UCLA linebacker Jordan Zumwalt. The hit drew a personal foul, but not a targeting call, and Thomas was down on the field for a few minutes. He was eventually diagnosed by trainers with a stinger, but not a concussion. He has not played since but appears to be moving around without pain.

Mark Leal replaced Thomas but was unable to move the ball on his first series, and Tech punter A.J. Hughes pinned UCLA at their nine yard line. After a five-yard run, Hundley took advantage of a Hokies zone blitz to scramble up the middle and rumble 86 yards for a touchdown, to put UCLA up 14-7 with 9:17 left in the half.

Leal drove the Hokies as deep as the UCLA 21 yard line late in the half, but a sack on third and six forced the Hokies into fourth and long from the Bruin 29. The Hokies tried a field goal, but Michael Branthover, named as placekicker this week, attempted his first field goal ever and missed a 46-yarder.

The stories of the first half were Logan Thomas’ injury — it’s unknown if he’ll return in the second half — and UCLA QB Brett Hundley shredding the Hokies for 168 yards on just six carries, mostly scrambles. Hundley is just 7-of-17 passing for 73 yards.

Virginia Tech has done some interesting things on defense, particularly lining up Dadi Nicolas at middle linebacker with linebackers Jack Tyler and Tariq Edwards lining up at defensive ends in a five-man line. The Hokies have blitzed Nicolas several times from that position.

Offensively, the Hokies have run little-used Carlis Parker on the jet sweep four times for 29 yards, and have made use of fullback Jerome Wright at tailback in the running game (four carries, 22 yards).

• After practicing all week, All-American cornerback Kyle Fuller (core) did not dress for the game.

• Deon Clarke, who was suspended for the final four games of the regular season, dressed for the game.

• Chuck Clark made his first career start, coming at the nickel back in Tech’s defensive formation.

• J.C. Coleman scored his first touchdown of the season on a 1-yard run in the first quarter.

• Wide receiver Carlis Parker and fullback/tailback Jerome Wright both got their first collegiate career carries. Parker has four carries for 29 yards at the half while Wright has four rushes for 22 yards.

• Kalvin Cline’s 36-yard reception in the first quarter gave him 26 receptions for the year, tying him for the  second-most catches by a tight end in the Frank Beamer era with Jeff King in 2005. The most catches by a Tech tight end under Beamer is 38 by Steve Johnson in 1987, Beamer’s first season.

• UCLA’s Brett Hundley had an 86-yard touchdown run, the longest run allowed by Tech in a bowl game. The previous long was 79 yards by Steve Hindman of Ole Miss in the 1968 Liberty Bowl. Hundley also has 168 yards rushing at the half, which is the most by a Tech opponent in any bowl game. Hindman had 121  yards in that Liberty Bowl game. The 168 yards rushing is the most allowed by a quarterback under Beamer and long-time coordinator Bud Foster.

• Hundley is just the fifth opposing player to run for 100 yards or more against Tech in a bowl game.

• Tech is 1-3 when trailing at the half this season, with the lone win coming against Marshall. 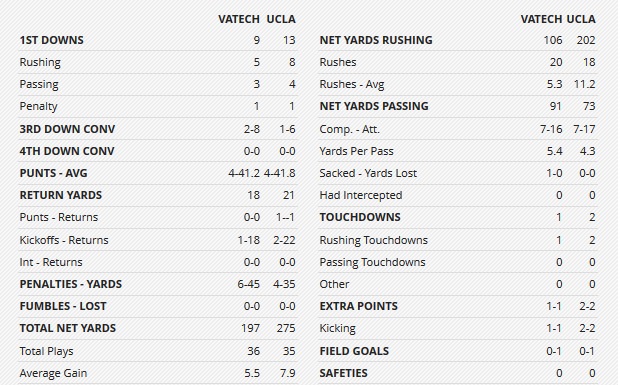 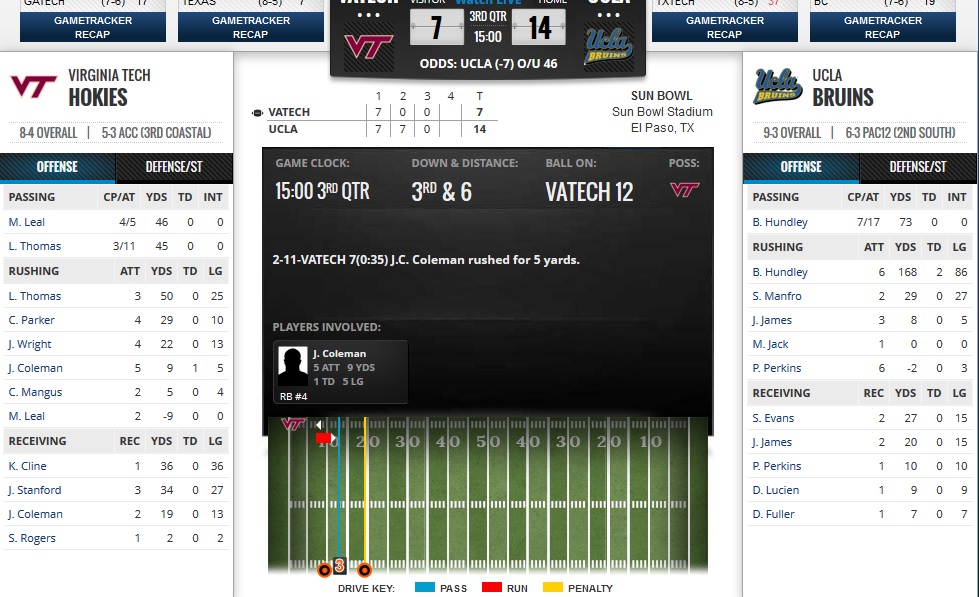