Virginia Tech will travel on the road to Morgantown on Saturday, where they’ll face West Virginia in their biggest road test of the year thus far.  The Hokies passed two big home tests against Iowa and Oklahoma State, but playing a true road game in a hostile environment is a different kind of challenge.

This game is a sellout, which shows that West Virginia fans still remember how much they dislike Virginia Tech even though the teams haven’t met on the hardwood since 2004, or on the gridiron since 2005.  The crowd on Saturday will be loud and passionate, and I’m fully expecting West Virginia to give their best effort of the season.

I caught a little bit of the WVU-Marshall game, and the Mountaineers play very tough, aggressive defense.  They extend their man-to-man outside the three-point line, and they can generate points off turnovers.  That’s a good thing for them, because their halfcourt offense hasn’t been anything to write home about so far.

Here’s a quick statistical comparison of the two teams. 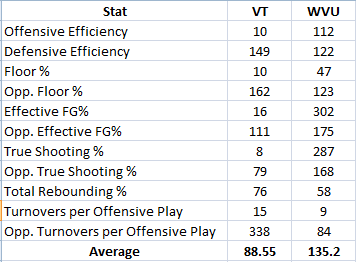 Tech is on average about 50 spots better than West Virginia in those categories.  However, one thing the Hokies haven’t done well this year is force turnovers.  They rank #338 nationally in opponents’ turnovers per possession.

If you’re wondering what some of those stats mean, you can find many of the definitions here.  They do a much better job of telling the story of a team than generic points per game and shooting percentage stats.

West Virginia is coached by future Hall of Famer Bob Huggins.  If there is any person on either bench who understands the Virginia Tech-West Virginia rivalry, it’s Huggins.  He was born in Morgantown, and he attended West Virginia.  He was around the rivalry his entire life.  He will have his players ready to play.

WVU doesn’t have a standout player.  In fact, their leading scorer doesn’t average as many points as Virginia Tech’s top three scorers.  Here’s a look at their expected starting lineup:

G Juwan Staten (6-1, 190, So.): 11 ppg, 3.2 rpg.  Staten is WVU’s best scoring guard, and he is also known for his defensive prowess.  He’s bigger than Hinds, and he leads the team in steals with 12, so it’s possible that Staten could be assigned to Erick Green in this game.

Obviously Virginia Tech has a big advantage in size in the backcourt, while the Mountaineers enjoy the same advantage on the inside.

Bob Huggins does have a full bench, which is a luxury that James Johnson does not enjoy at Virginia Tech.  Here’s a look at some key WVU reserves who could play a role in Saturday’s game:

F Matt Humphrey (6-6, 205, r-Sr.): 3.8 ppg, 2.2 rpg.  Humphrey came to West Virginia via Boston College, and before that he played for the Oregon Ducks.  He averaged just over 10 points per game in Chestnut Hill, but he’s only getting 12.5 minutes per game in Morgantown.

F Volodymyr Gerun (6-10, 240, So.: Gerun is an unknown player from the Ukraine.  He sat out the first six games of the season because of a suspension.  He led the Ukraine at the under-19 European Championships in 2011 by averaging 18.2 points and 11.1 rebounds per game.  He is reportedly the most skilled player in the WVU frontcourt, though he will be appearing in his first college basketball game.

A Road Win Would Validate the First Seven Games

Virginia Tech appears to be a good basketball team, though I think a road win in a hostile Morgantown atmosphere would certainly go a long way toward validating Tech’s 7-0 start to the season.  That’s going to be easier said than done.

Tech has some guys who have played well so far, but I’m not sure how they will fare in a hostile West Virginia atmosphere against a very physical basketball team.  The Mountaineers like to push offenses out, and you’ve got to be tough (and good) to beat their defense.  How will guys like Marshall Wood and Joey van Zegeren handle themselves in an atmosphere like that?

I think Virginia Tech is the better team, but the better basketball team doesn’t always win, especially when they are playing on the road.  I feel like this is going to be a good game, and it’s going to be lower scoring than we’ve grown used to this season.  If the Hokies return to Blacksburg with their undefeated record still intact, then that means they’ve got a chance to be very good.

The game is at 4:00 Saturday and will be televised on ESPN2.