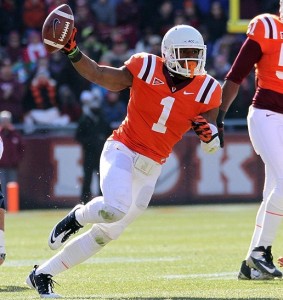 At this time of year, we are always discussing which bowl game Virginia Tech will be headed to in late December or early January. This year, the options aren’t as appealing as usual.

Dating back to their first year in the ACC, Virginia Tech has been the #1 or #2 pick in the ACC bowl pecking order every … single … year.

That’s a pretty remarkable run. Before we get too much further into this article, remember that it’s very rare for a bowl to bypass Virginia Tech. The Fiesta Bowl did so in 2000 to select Notre Dame instead, but that’s Notre Dame. In 2001, the Gator Bowl picked Virginia Tech over Syracuse, even though the Orange had a better record than the Hokies and had beaten them head-to-head. Throughout the years, it’s been very hard for bowls to bypass Tech in favor of another team. There just haven’t been any other good options in either the Big East or the ACC. Keep that fact in mind as we go through each of the bowls one by one.

This article will operate under the assumption that Florida State will beat Georgia Tech on Saturday in the ACC Championship Game. That would put the Noles in the Orange Bowl, Clemson in the Chick-fil-A Bowl, and give the Yellow Jackets a 6-7 record.

That scenario would mean the Hokies would likely be taken by one of four bowls: the Russell Athletic Bowl (Orlando), the Sun Bowl (El Paso), the Music City Bowl (Nashville) or the Belk Bowl (Charlotte). There are only six bowl eligible teams in the ACC this year (thanks to Miami and North Carolina), so this should be fairly easy to figure out. If Georgia Tech doesn’t get the waiver from the NCAA to go bowling with a losing record, then only five teams will be bowl eligible.

The Russell Athletic Bowl would have a decision to make. Clearly they aren’t going to take Duke, so we can go ahead and cross the Blue Devils off that list. That leaves us with Virginia Tech, Georgia Tech and NC State. At 7-5, NC State would usually be a good choice here. However, head coach Tom O’Brien was fired earlier this week. Georgia Tech, with a 5-3 ACC record, has the best conference mark of all eligible schools. But would the #3 ACC bowl really want a 6-7 team with a fan base that doesn’t travel well?

I think there is a very strong chance that the Russell Athletic Bowl would select Virginia Tech over Georgia Tech and NC State. Despite VT’s mediocre 6-6 record, that 6-7 mark for Georgia Tech just isn’t attractive, and the fact that NC State doesn’t have a head coach is a turnoff. Unless of course, the Wolfpack decide to hire a head coach between now and then and let him coach the bowl game. My gut feel is that Virginia Tech is headed to Orlando, but I could be wrong.

What’s good about Orlando? Well, Tech has never bowled there, for one. The average high in late December/early January is a little over 70. There are plenty of things to do. “The Theme Park Capital of the World” has something for everybody. There’s plenty of golf. You can go take in an Orlando Magic game, if they happen to be in town.

I’ve always secretly wanted Virginia Tech to go to this bowl, though I always thought it would come after an 8-4 or 9-3 record, not 6-6. If Tech goes to Orlando, the likely opponent would be Louisville or Rutgers. That’s fine with me. When you are 6-6, you can’t be too picky about your bowl opponents. I want to be in a game that the Hokies can win.

I know everyone reading this would be excited about a possible trip to El Paso, Texas to celebrate the Holidays. When I think about the Sun Bowl, I think about watching Miami’s blowout loss to Notre Dame a couple of years back and seeing Hurricane players throwing snowballs at each other on the sideline. When I think of bowl games, I usually don’t think of snow.

Remember that the loser of the ACC Championship Game can’t fall below the Sun Bowl. If Georgia Tech loses to Florida State and they get that waiver to play in a bowl game with a losing record, then El Paso appears to be their destination. Assuming the Russell Athletic Bowl passes on Georgia Tech (which is likely, IMO), they are headed to the Sun Bowl.

I think the Russell Athletic Bowl will come down to Virginia Tech vs. NC State. If that bowl chooses the Wolfpack over the Hokies, then Tech will fall past the Sun Bowl to either the Belk Bowl or the Music City Bowl.

If somehow Virginia Tech does end up in El Paso, the likely opponent appears to be Lane Kiffin and USC.

Sun Bowl trivia: Tech’s first-ever bowl invitation was to the Sun Bowl, back in 1947. Cincinnati beat Tech 18-6, and yes, the temperatures were below freezing, and there was snow on the field.

While Charlotte would be an easier trip for most of us, I think we can all agree that Nashville is the more desirable city from a destination and entertainment standpoint. If Virginia Tech drops this far, the Belk Bowl and the Music City Bowl will be choosing between the Hokies and the Duke Blue Devils.

I think they would make a deal, keeping Duke in the state of North Carolina to play in the Belk Bowl. That would help attendance in that city. The Music City Bowl would be happy to take Virginia Tech because they remember the Hokies bringing a ton of fans to that game in 1998, when Tech beat Alabama 38-7.

There’s a possibility that Cincinnati could be heading to the Belk Bowl, so those officials would want to avoid the VT-Bearcat rematch. That makes it seem even more likely that the Hokies would get sent to Nashville, should they fall past the Russell Athletic Bowl.

If Tech does head to the Music City Bowl, the likely opponent would be Vanderbilt. The Commodores went 8-4 this season, with a 5-3 mark in the SEC. That would be unfortunate for the Hokies, as Vanderbilt is located in Nashville. That would give them a big home field advantage. The Commodores started the season 0-2, but finished with a six game winning streak.

I looked around the internet at five different sites to get a feel for where the national analysts believe the Hokies will go bowling. Here’s what I found:

Four of those six guys have the Hokies in the Russell Athletic Bowl. Two of them have Tech headed to Nashville. None of them believe the Hokies will end up in Charlotte or El Paso.

Right now, the safe bet is to get ready to head to warm, sunny Orlando. Besides beating Virginia, that would be the best thing about this 6-6 season. We’ll find out for sure after Saturday’s round of games.