I started last year’s ACC Tournament on the couch, watching Virginia Tech win a dramatic overtime game against Clemson from the comforts of my own home. I couldn’t stand to watch it at home after that nailbiter, so I headed downtown to PK’s to watch the Notre Dame game the next night.

Before that game with the Irish, I ordered a cheeseburger. Virginia Tech won. The next night I went to PK’s again for the pregame for the semifinal against UNC, and since Tech had won the night before, I figured it couldn’t hurt to order a cheeseburger again. I did, then I went to Champs to watch the game, and the Hokies won.

Two cheeseburgers, two wins. The next day, for the ACC Tournament Final, I didn’t go to PK’s. I headed back to Champs, but unwilling to tempt fate from a dietary standpoint, I ordered a cheeseburger again. Sure, it wasn’t a PK’s cheeseburger, but it was a cheeseburger nonetheless. For the third day in a row, the Hokies won, and got their first ACC Title.

Fast forward to Sunday, December 4, and the Hokies were playing their first ACC game of this season against UNC. I didn’t have a chance to eat at home before the start of the game, so I figured I’d get there a little early and grab some food. I walked around the concourse to see what was available, and I eventually settled on – you guessed it – a cheeseburger. Virginia Tech won 80-72.

That was four ACC games in a row – Notre Dame, UNC, Duke, and UNC again – with a cheeseburger, and four wins to go with it. I was consciously aware of my cheeseburger streak during the ACC Tournament, but I had forgotten about it by the time December rolled around. My decision to get a cheeseburger before the UNC game was a pure fluke.

After the UNC win, the Hokies lost seven ACC games in a row. Guess what I did not do before each of those seven games? I didn’t have a cheeseburger. Late yesterday afternoon, for whatever reason, it just popped into my head that Tech had won four ACC games in a row when I had eaten a cheeseburger before the game, and that the team hadn’t won a single ACC game since I stopped doing so. Crash Davis taught a young Chris Coleman to respect the streak, so I knew what I had to do. I went to Cassell early last night to make sure I got my cheeseburger before the lines got big.

To recap it in table format, here are the most recent 12 ACC games Virginia Tech has played, with the results. The right-hand column indicates whether or not I had a cheeseburger before the game. 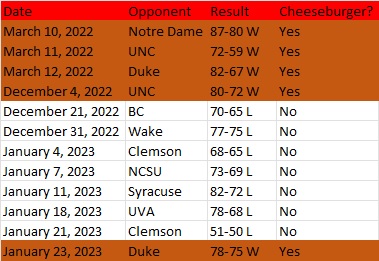 Isn’t that the type of hard-hitting analysis that you come here for? The only question