Finally, it’s time for my yearly article on the updated weights for the Virginia Tech football team. It’s one of my favorite articles to write each year, and though it is a little bit late because the Hokies didn’t do the update until later than normal, it’s time to dive in.

This article won’t focus on every single player. It will discuss a few specific players, as well as some noticeable trends, perhaps at certain positions. As usual, I want to throw in several caveats before starting this article on the updated player weights for Virginia Tech football.

First, weight can fluctuate on a day-to-day basis. For example, Malachi Thomas weighed in at 198 on the official weigh-in day, but he told the media on Friday that he was at 203. It can depend on what time of the day you weigh-in, your meals, etc. I always weigh more in the afternoon because I’ve had a couple of meals by that point.

Second, it’s hard to say whether some of last year’s weights were accurate. Wilfried Pene was listed at 253 last season, but he looked a bit bigger than that to me. Tre Turner was listed at 190, but he weighed in at under 180 in the spring when working out for NFL teams, so I have a hard time believing he was  actually 190 when he played for the Hokies last fall.

Third, don’t pay any attention to the numbers for the true freshmen. The freshmen who enrolled this month haven’t officially been weighed yet (that happens on Tuesday). Even those who enrolled in January did not have an official weigh-in back in the winter. Instead, Tech just used their listed weights from their online recruiting profiles. For example, Brody Meadows didn’t actually jump from 280 in January to 320 in August. He enrolled quite a bit bigger than 280, so the weight increase isn’t nearly as dramatic as it seems. Because of all of that, we’re not going to talk about the true freshmen today; we’re only going to focus on returning players.

I’ve also decided to ignore height this year. When I was in the 10th grade, I measured at somewhere between 5-8 and 5-9, and then my coach intentionally wrote down 5-10. That’s just the way it is sometimes. Michael Vick and Tyrod Taylor were both listed at 6-1, but when they stand right next to each other, Tyrod is two inches taller.

Finally, I’m only going to talk about scholarship players, unless I believe that a walk-on has a legitimate chance to contribute on offense or defense.

Keep those things in mind when reading this article. I’m sure I’ll also have some strategic reminders when I deem them important.

Here’s a list of all the changes, and thanks for David Cunningham for creating the tables. Remember, true freshmen aren’t listed unless they were already enrolled in January, and even then it’s best to ignore the numbers because we aren’t sure whether their original listed weight was accurate. 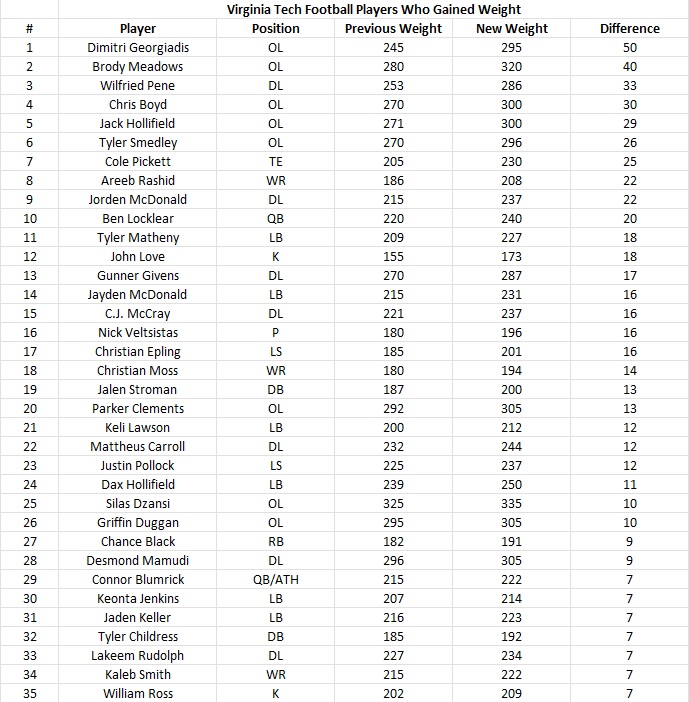