My thoughts on the offense’s struggles are pretty much the same as Will Stewart’s, though for me the end began with 7:18 left in the third quarter, when Virginia Tech settled for a field goal after hammering Miami. My hope for the game dimmed here—Tech had its way with Miami all the way down the field, but in the red zone, they couldn’t push the score to a 28-13 lead against a team I wouldn’t trust to keep its cool when losing in the fourth.

Different things kept going wrong on this drive and the ones after, and it made for a tough conclusion to the game. We’ll focus on the execution—“I’m in favor of it”—of the plays, but we’ll get into fan-favorites like “predictability,” too. I’m not going to change anyone’s mind about what ails Tech or how to fix it, but you might get some details to bolster your argument. (And we’ll swing back around to the defense on a later date.)

Let’s start with the Hokies having slashed their way down to Miami’s fifteen-yard line. On 1st and 10, Tech came out in 12 personnel, with Smith, Turner, and Gallo split to the field. Gallo was the #3 (innermost) receiver, while DeIuliis was the nub TE to the boundary. Miami responded with a Bear front. They had five defensive linemen in, and they were graders in what amounted to a pseudo-nine-man box, with the centerfield safety at linebacker depth and the boundary corner hugging the edge: 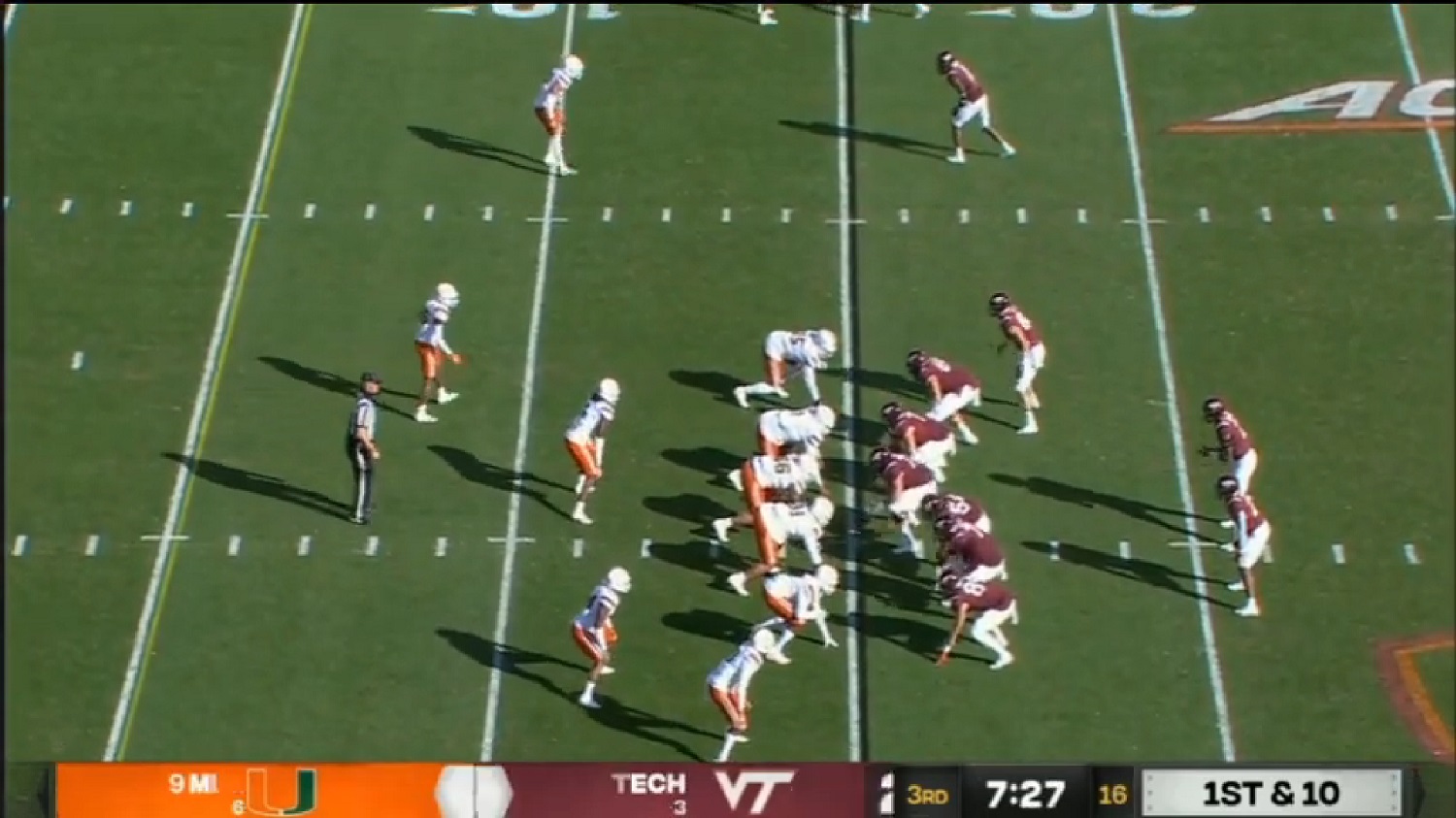 This was a major adjustment, practically a goal line-package being brought out in the outer quadrant of the red zone. Tech had scored their second TD of the day by bludgeoning the defense with doses of zone that culminated in six for Holston, and they ran gap and zone on what would be their last TD drive, which also happened to be when Quincy Patterson made a special appearance in a heavy package they should call “Thor.”

So, now Miami was in the Bear. Pre-snap, Hooker waved Gallo back to the LOS as a wingback to help block. The call was Outside Zone Read. The contemporary spread philosophy is that having a single-high safety is enough of a factor to audible to a pass or to throw the ball as part of a packaged play in most instances. With a true, five-man DL and everybody not playing over a receiver basically standing in the box, even most non-spread offenses would throw.

The complicated part is that Miami wasn’t set up very well to stop stretch blocking to the right side. Bear is vulnerable on the edges (as Hokie fans saw when the front ran into trouble in the Ohio State rematch), or at least relatively so, when compared to the interior. Miami overplayed the keep by having both the boundary linebacker and boundary corner camp on the edge to take away a quick toss or pitch option. At the same time, they bunched their defensive linemen up in the TNT