This is my annual update of the Virginia Tech Athletics financial information for the year ended June 30, 2017 (FY 2017). As noted in past reports, the following standard caveats and comments are made:

As in prior years, the information for Virginia Tech and UVA is derived from the published NCAA reports on the Virginia Auditor of Public Accounts (APA) web site.

For this report I have only presented the current and past year info for both Virginia Tech and UVA. 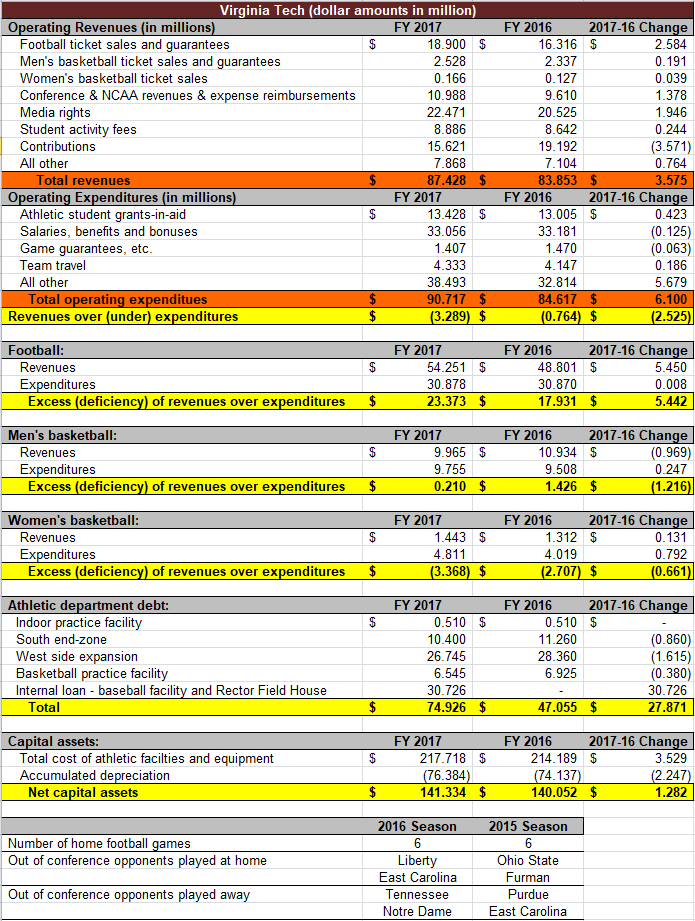 For FY 2017 Virginia Tech reported an excess of expenditures over revenue (deficit) of $3.289 million. In a recent Tech Sideline interview with Whit Babcock posted April 12, 2018, this issue was addressed. In that interview, Whit disclosed that the VTAF had approximately $7.2 million of scholarship funds on hand that had not been transferred to the athletic department by June 30, 2017. So, if those funds had been transferred, reported contribution revenue would have been approximately $22 million and Tech would have had a surplus in the neighborhood of approximately $4 million.

Football ticket sales and guarantees revenue increased $2.584 million in FY 2017 primarily due to the Battle of Bristol guarantee of $4.3 million.

The FY 2017 men’s basketball ticket sales and guarantees were slightly ahead of the prior year in Buzz Williams’ third season as coach.

Student activity fees applied to athletics increased by approximately 2.82% in FY 2017, most likely due to an increase