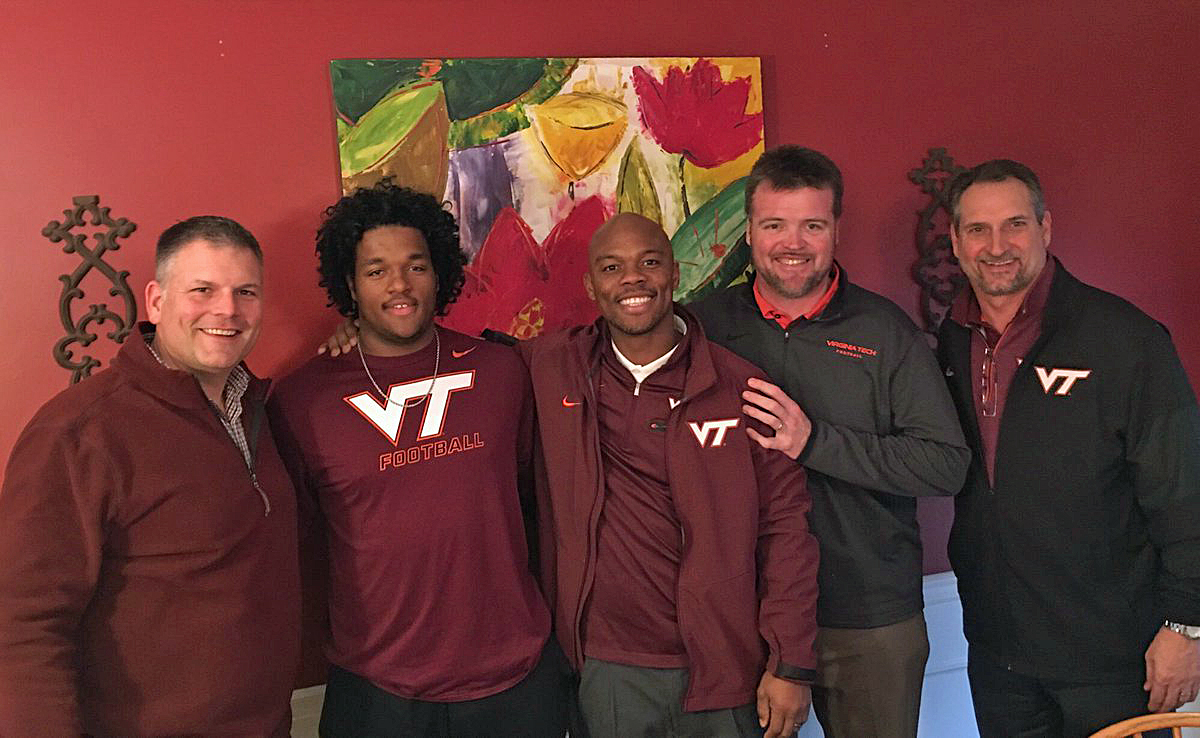 Power 5 offers: 0 (Note: Rumor has it that Brown picked up a few Power 5 offers after he committed to Virginia Tech, but he didn’t go public with any of those offers.  So take this number with a grain of salt.)

Virginia Tech only signed two offensive linemen in the 2017 recruiting class, so their evaluations of those prospects needed to be good.  In fact, Justin Fuente called Aiden Brown an “evaluation” guy on Signing Day.  He noted that Brown came up to Tech’s camp in summer 2016 and the coaches loved his athleticism, how he bent, and how he could get to the second level.  An offer was extended, and Brown accepted shortly thereafter.

Brown is expected to play the offensive guard position at Virginia Tech.  However, I could see him getting a strong look at center at some point down the line as well.  He has the versatility to play either spot at the college level, and versatility is valuable to coaches.

Let’s take a look at Brown’s film and see if we can see what the coaching staff saw in him.

First, let’s go over his strengths as a player.

Overall athleticism: Brown is an overall good athlete.  He can get to the second level easily, and he can change directions.  Those are both very important attributes for offensive linemen.

Strong hands: Brown might not be the biggest guy in the world, but he appears to have strong hands.  He does a good job of keeping them inside, so holding shouldn’t be a major issue at the next level.  Once he gets his hands inside, he shows the ability to easily control a defensive player.

Good hips: Brown has good hips, which means he’s able to pop up out of his initial stance quickly.  That helps him compensate for his current lack of ideal upper body strength.

Lower body strength: Brown appears to have thick legs, which combined with his good hips gives him the ability to build a strong initial base.

He’s got a few question marks as well…

Upper body strength: His upper body does not appear to be as developed as his lower body at this stage.  That’s one reason he’s not considered a candidate for early playing time.  He’s got some work to do in the weight room, as do most young linemen.

Overall size: Even after a couple of years in the weight room, is Brown going to have the size to effectively block the bigger, stronger defensive tackles that he faces?  That’s a question mark right now.

Overall, Brown appears to have the tools to develop into a solid ACC offensive linemen.  The tools are there.  Now it’s all about refining those tools and getting bigger and stronger in the weight room.

Bottom Line: If you want to make a comparison to a past player, I’d compare Aiden Brown to former starting offensive guard Jaymes Brooks.  Neither guy was huge, and neither guy was a punishing blocker a the point of attack.  Despite that, Brooks was a solid three-year starter for Virginia Tech.  Brooks was a good athlete who could block well with good angles, and he could get to the second level.  Brown’s athleticism gives him the chance to have the same type of career.  He could also move inside one spot and compete for playing time at center, depending on how the rest of the roster shakes out.

ETA: 2019.  I’m forecasting a normal track of development for Aiden Brown.  He’ll redshirt this year, get some garbage time snaps as a redshirt-freshman in