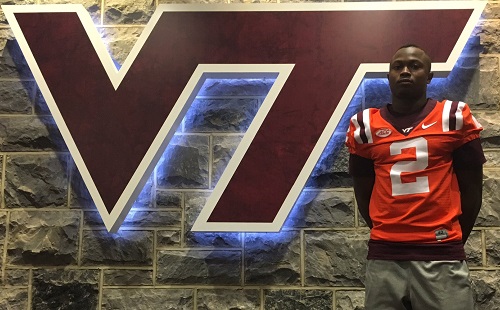 Class of 2016 commit Henri Murphy, who committed on Saturday, might have to sit out a year before playing at Virginia Tech, but to him it’s worth it.

The 5-foot-11 athlete from White Hall, AR originally was in the Class of 2017, and was going to play another year at the JUCO level. Instead, Murphy will enroll at Virginia Tech in July and will redshirt for the upcoming season.

“I’ll be with the program, out there practicing with the guys and getting stronger,” Murphy said. “It’s not like I’m going to be away from the game. I’ll be able to play in scrimmages and practices.”

For Murphy, getting to work with the coaching staff, and especially special teams coordinator James Shibest, made him want to commit sooner rather than later.

“He’s a very cool guy,” Murphy said. “He never tells me anything different, he always has wanted the best thing for me. He’s checked on me the most. He showed he cared about my family and that’s a great thing to be around.”

In Murphy’s visit to Virginia Tech earlier this week, Murphy said he enjoyed seeing the town and meeting new people.

Murphy has primarily played at wide receiver, but will get a look defensively at defensive back, as well as possibly as a returner.

Murphy’s speed makes him a natural candidate at kick or punt returner. Hudl has his