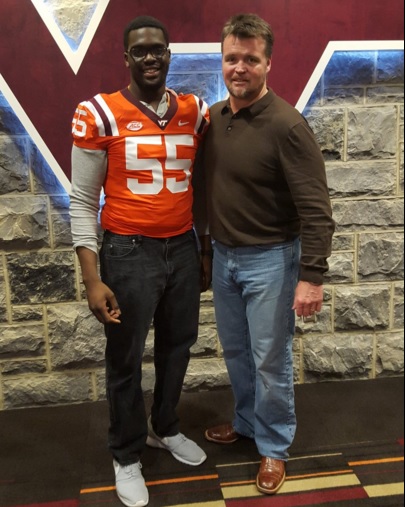 Silas Dzansi is one of the more interesting signees in the class of 2016.  He had committed to play at Delaware State, which is a lower level 1-AA school, before the Hokies came in with an offer.  What did they see in him that the upper level 1-AA schools such as JMU, William & Mary and Richmond did not see?

I’m not sure, to be honest.  I’m not saying that as a criticism of Dzansi…I’m saying it because there is no film of him playing offensive tackle in high school.  All his high school film shows him playing on the defensive line…

It’s really difficult to evaluate Dzansi based on his defensive highlight film.  Tech’s coaches had the luxury of seeing his offensive line tape, and the holdover coaches saw him at camp last summer.  All I have to go by is that highlight package, and that’s not enough to get a proper evaluation.

1: Size.  Offensive line coach Vance Vice is a big guy, and Dzansi is just as big, as you can tell from the picture at the top of this article.  The frame is obviously there for him to develop into an ACC offensive lineman.

2: He’ll be given time to develop.  Dzansi will go to prep school for a year, and he won’t be asked to play right away at Virginia Tech.  He’ll have plenty of time to add muscle, strength, and learn technique.

3: I think he moves well enough to play offensive line at this level.  He certainly isn’t a defensive lineman in the ACC, but I do