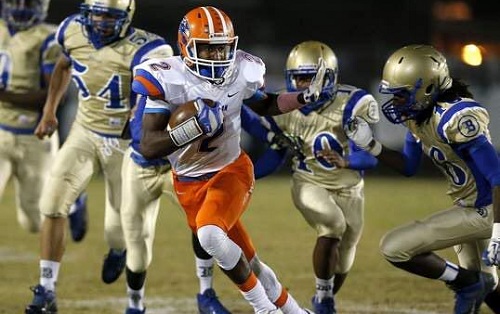 Sam Denmark is the fastest player in Tech’s 2016 recruiting class. Doing some research online, I found that Denmark ran a 10.92 100 meter dash in 2014, which was good enough to finish second in the state of South Carolina. I couldn’t find his time listed for 2015, but suffice to say that Denmark is a fast guy in a state with a lot of fast guys.

We’ve got to give a lot of people credit for recruiting Denmark. First off, the old staff deserves a lot of credit for identifying him as a prospect and recruiting him. Second, the new staff did a great job of holding onto him at the end. South Carolina heavily pursued Denmark in December. They offered him a scholarship and he took an official visit. However, Justin Fuente and his staff were able to snatch him from his in-state school. That was an impressive job.

As a wide reciever, Denmark plays an important position of need. Because he enrolled in January and will go through spring practice, it would not be surprising at all to see him on the field for Virginia Tech this fall. What kind of player are the Hokies getting? Let’s take a quick look at his strengths.

Speed: Denmark has the ability to stretch the field. He’s a track standout like Demitri Knowles, but I believe his speed will translate to the field better.

Quick: Denmark appears to be quick in and out of routes. Not many players are both fast and quick, but Denmark is.  His quickness