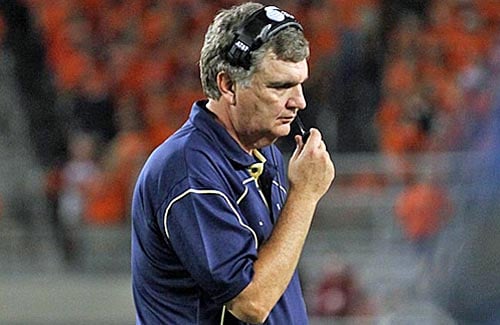 Everyone wants to talk about Georgia Tech’s offensive system, but truth be told, any offensive system can work with the right talent. It’s obvious the Yellow Jackets don’t have the talent on the offensive side of the ball that they used to.

It’s well-known that VT’s defensive talent is down a bit this year, yet from a total yards standpoint, Thursday night was Bud Foster’s best performance against Paul Johnson’s offense.

On the whole, Tech’s defense has done a remarkable job over the years against an offense that has proved to be extremely difficult to stop. Not only is Bud Foster an excellent defensive coach, but VT generally outmatches the Yellow Jackets in personnel. I thought that was especially the case this year.

Looking at Georgia Tech’s offense, they don’t have a good B-back this year, their A-backs are all freshmen, their wide receivers aren’t dangerous, and their offensive line isn’t what it normally is. Combine that with their usual middling defense, and the result is a 3-7 football team. They’ve had some close losses, and they managed to upset Florida State, but Paul Johnson hasn’t been able to recruit well enough to build something better than a seven or eight win team, for the most part.

Johnson inherited a roster that included Josh Nesbitt, Johnathan Dwyer and Roddy Jones, and all those guys were great fits for his offense.  Since those players departed, the wins have decreased.