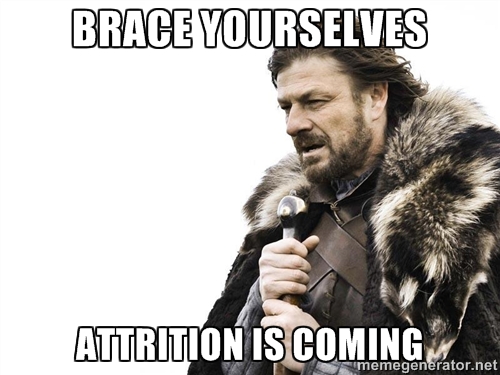 Like last year, you can expect a good amount of attrition in the football program again this offseason.

We already know that tight end Darius Redman won’t be back. His status was changed from “r-Junior” to “Senior” (on hokiesports.com) before the Military Bowl, which means that he has elected not to return for his fifth year. Redman had little to no chance of earning playing time next season, so the decision is probably best for him as well as the program.

It’s impossible to get an accurate scholarship count. We have to do things such as guess that Wade Hansen and Joey Slye will be placed on scholarship, and we don’t know exactly which recruits will qualify and which will not.

After going through the roster and looking at the recruiting class, I came up with 96 as the number of players projected to be on scholarship this fall. That number will likely drop to 95 if/when Tim Settle doesn’t qualify, but it could also move up to 97 or thereabouts if the Hokies manage to add a couple more recruits to this class. The NCAA scholarship limit is 85. That means up to 12 players who are scheduled to be on the team next year will either not qualify, will transfer, or will give up football.

It’s not our business to make predictions on who will or will not be back. However, it is our job to take you on a quick trip through the roster and show you what the depth looks like at each spot so you won’t be taken by surprise when the Hokies inevitably lose players.

Before we get started, here’s the article that we ran last January 6. Tech was at 93 players at this point last year, and as expected guys like E.L. Smiling, Mark Irick, Matt Roth, Tabyus Taylor, etc. were lost for various reasons. Here’s a list of the guys from that article who were not on the team when the 2014 season began:

Also, Derrick Nnadi didn’t sign with Tech as I projected him to, though Tech did end up with Michael Brewer, who was an unknown in January. As you can see, attrition happens in every way, shape and form in the offseason.

Note: this article contains a ton of names, and it’s possible I missed one.  Let me know ASAP if you see any mistakes.

Tech is scheduled to have five quarterbacks on scholarship in 2015.

I wouldn’t expect any attrition at the quarterback position. The job is still open, and even if Michael Brewer is the starting quarterback again, the other four guys will all have a chance to win the starting