This was just what the doctor ordered to make Hokie fans focus on something other than that hideous loss to Wake Forest.

The week leading up to this game was a tough one for Hokie fans, who exhibited less confidence than I think I’ve ever seen prior to a Tech-UVa game. As Chris noted in yesterday’s article, 59% of the voters in our pre-game prediction poll thought Virginia was going to win (assuming Wahoos didn’t pollute the voting, which I don’t think they did): 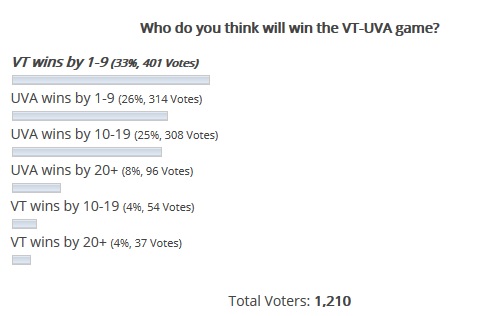 I think I spent my week talking to the 33% that thought Virginia was going to win by ten points or more, because I got some serious gloom and doom from the Hokies I spoke with, including one right before the game started who said Virginia was going to win by three touchdowns. The press box butts right up to the luxury boxes on the fifth floor of the West side of Lane Stadium, and that was the prediction from a box dweller I encountered in the hallway just prior to kickoff.

But every time someone forecasted gloom and doom and predicted a double-digit loss, all I said was, “I don’t know … maybe.” That’s my way of saying, “I’m not going to tell you you’re wrong to your face, but that would shock me.”