1: Go over the offensive players we signed in 2010 and 2011. What are they doing now, and how did those classes hurt our depth and talent level? 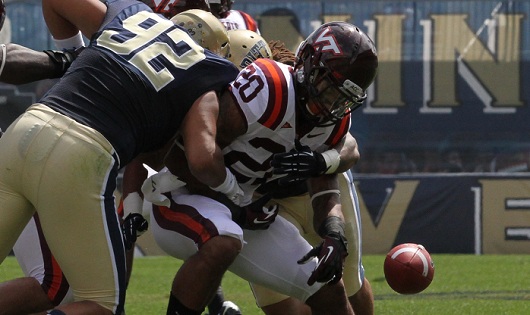 Chris Coleman: This one is pretty straightforward. Here’s 2010:

QB Mark Leal: Leal was a career backup who recently left the program.
QB Ricardo Young: Young didn’t last at Tech, and he left two other programs as well.
WR E.L. Smiling: Smiling never played a meaningful down for the Hokies before leaving.
TE Jerome Lewis: Lewis left the program shortly after his arrival.
OT Laurence Gibson: Gibson became a two-year starter.
OG Matt Arkema: Arkema played a bit in 2012, but eventually gave up football.
OT Mark Shuman: Plagued with injuries, Shuman has never contributed.
OG/C Caleb Farris: Farris has been a starter or contributor since his sophomore season.

Out of those eight offensive recruits, only two became contributors. One of those two contributors (Farris) lost his starting job to a r-freshman as a senior. Overall, the 2010 recruiting class was a bad one for the offense.