Yesterday we went over some names on offense that you need to keep an eye on this spring. Today, we’ll flip sides and go over some players on the defensive side of the ball.

Bud Foster lost a lot of standout players following the 2013 season, particularly up front and at linebacker. He’ll be replacing them with youthful, unproven players for the most part. There is competition at most positions, and the competitors will need to make a good impression on Foster this spring.

Without further ado, here is our list of players to watch on defense this spring.

DE Ken Ekanem (6-3, 245, r-So.): Ekanem came to Virginia Tech as a highly-touted recruit. Unfortunately he tore his ACL in his final year of high school, and he got limited playing time as a r-freshman last season. Ekanem played in 11 total games, with 69 special teams snaps and seven defensive snaps. He is tied atop the depth chart with Seth Dooley. Can he step up and win a starting job in his third season? As a highly-decorated recruit with a major offer list, that’s what is expected of him.

DE Dadi Nicolas (6-3, 218, r-Jr.): I’m not sure Dadi Nicolas is genetically meant to get big at this stage of his life. Despite another year in the strength and conditioning program, he remains very light for a defensive end (or a linebacker, for that matter). We all know he can make plays, but he’s made most of his plays as a standup outside linebacker against Pitt. What can he do as a full-time defensive end? Is he big enough to hold up against the running game? It’s a big spring for Nicolas. He needs to take the next step towards becoming an all-around football player. 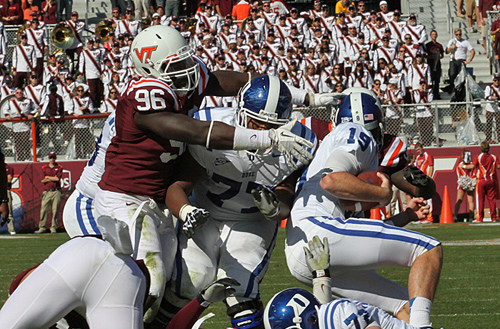