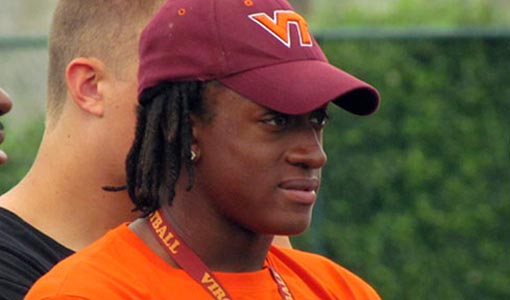 Like his brother Trey, Terrell Edmunds skipped a grade in school. He will enroll at Virginia Tech as a 17 year old true freshman, and still very raw. He has good growth potential, but because of his young age, it’s important not to set high expectations for him early in his career.

Trey Edmunds had to be Tech’s top playmaker as an 18 year old. He was called upon before he was quite ready, though he did a pretty good job considering his age. Fortunately I don’t think Terrell Edmunds will be put in the same situation because of Virginia Tech’s depth in the secondary.

While Edmunds is listed as a cornerback, I think he’ll end up at whip or rover. Free safety is also a possibility. He’s already listed at 6-1, 185, and he’s got good length and a big frame. I could see him eventually playing at 210-215 in college, which seems more suited to rover or whip than to cornerback.

The first 10 minutes of Edmunds’ highlight film shows him on offense. He lines up at running back, quarterback and wide receiver for Dan River High School. However, his college future is likely on defense, so you can fast forward to approximately the 10 minute mark of the video to see his defensive highlights.

Here’s what I see.

Frame: Edmunds has the frame to be a big, intimidating safety for Virginia Tech. It’s easy to see him playing at well over 200.