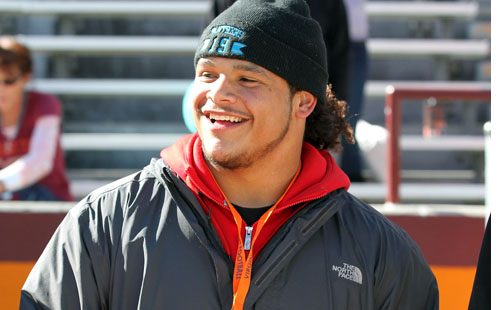 Steve Sobczak is a short, squatty, typical defensive tackle recruit for Virginia Tech.  I think his build is very similar to that of Derrick Hopkins, and I believe he’s capable of having a productive career as well.  He has a few negative attributes that kept him from being highly-recruited, but considering his positive traits and what we know about the type of defensive tackles who find success at Virginia Tech, it was a no-brainer to extend an offer his way.

Sobczak was ignored early in the process because he was overweight.  However, he lost almost 50 pounds heading into his senior season and had a big year.  He played much better at a lower playing weight.  He displayed improved quickness and better durability.  Bud Foster considers him a major sleeper prospect.

Here’s a link to Sobczak’s Hudl film.  Here’s what stands out to me…

Motor: You don’t have to be a football genius to tell that Sobczak plays really hard.  He doesn’t let up.  He chases down running backs and receivers who are already down the field, he sniffs out screens, and he never lets up.

First step: I think Sobczak gets out of his stance quickly.

Strength: Sobczak appears to have good playing strength.  He likes contact, and he’s more physical than his opponents.

Pursuit: On his highlight film, you’ll notice how he has terrific pursuit skills.  He doesn’t stand around and watch when a back or receiver gets into the open field.  He goes after them.