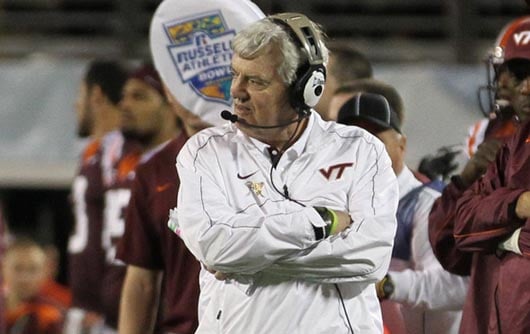 1: Is Frank truly on board with all the new recruiting tactics or is he going along with the new staff’s ideas reluctantly?

Chris Coleman: That’s a very good question.  Virginia Tech recruited Isaiah Ford (Louisville) and Chris Durkin (Michigan State) heavily while they were committed to other schools.  They are pursuing transfer quarterbacks, and the last transfer from a 1-A school that I remember the Hokies taking before Brent Benedict was Isaac Montgomery (DT from UNC) back in 2002.  They are possibly even going after some JUCO quarterbacks, and they haven’t taken a JUCO since James Griffin in 2002.

All of that seems very un-Beamer like, doesn’t it?  Personally, I think Frank is fine with it.  The #1 thing you have to remember about Frank is his philosophy of hiring coaches.  He’s said time and time again that he likes to hire guys he trusts, and then sit back and let them coach.  He doesn’t like to interfere in what they are doing.  It’s one of the things that make him a good boss to work for … he’s not looking over the shoulders of his employees all the time.

That strategy can backfire, obviously, as we saw with Tech’s old offensive coaching staff.  Beamer sat back, let them coach, and let them move forward with their own recruiting strategy (or lack thereof).  We all know how that turned out.

When Beamer made the coaching changes following the 2012 season, he was focused on bringing new blood into the program.  He wanted some outside guys.  He was smart enough to realize that the way they had been doing thing for years wasn’t necessarily working anymore.  He wanted to go out and hire guys with new ways.  Look at the latest offensive coaches he has hired:

1: Shane Beamer.  Shane came up in the SEC.  From a personality standpoint, he is a mixture of Frank Beamer and Steve Spurrier.