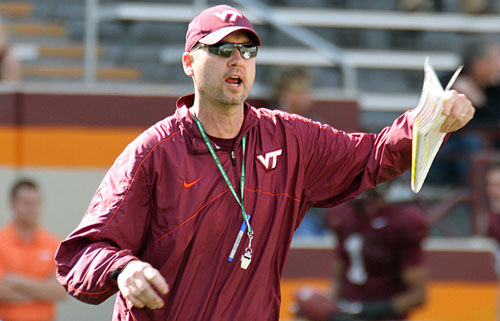 Scot Loeffler is continuing his pursuit of transfer quarterbacks. Before Christmas, we first reported in a Friday Q&A that Loeffler was going after transfers, and we speculated that one of the targets would be Troy Murphy of Florida. Murphy, who was recruited to Florida by Loeffler and current BC head coach Steve Addazio, ended up deciding on Boston College.

It’s not clear whether Tech pursued Murphy or not, but there are two published reports that link the Hokies with two other quarterbacks who are transferring: Max Wittek of USC and Michael Brewer of Texas Tech.

Both of those guys have a couple of things in common:

1: They are graduating this spring, which means they will be eligible to play right away without sitting out a year.

2: They have two years of eligibility remaining.

I think that tell us two things:

1: Scot Loeffler isn’t super confident in his 2014 quarterbacks. Mark Leal doesn’t have a great arm, and looked shaky in the Sun Bowl. Brenden Motley probably wouldn’t be a quarterback if he played for somebody else. Behind those two guys are a pair of true freshmen.

2: Loeffler isn’t super confident in his 2015 quarterbacks, either. Andrew Ford and Chris Durkin will still be very young players, entering their second year in the program.

It’s not that Loeffler doesn’t believe that one of Leal, Motley, Ford or Durkin can do the job. He knows it’s possible that one or more of them will step up. However, that’s far from certain. If the Sun Bowl version of Mark Leal is the real Mark Leal, what are the other options? A high school Wing-T quarterback and a pair of true freshmen. In other words, Tech is likely to struggle mightily at the quarterback position this year if Leal doesn’t play well.

That’s why Loeffler wants to land a transfer who is eligible to play right away.