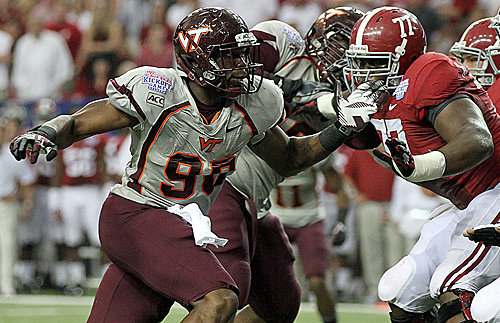 1) Will the loss of Ronny Vandyke , and the lack of a true WHIP LB bite this team at any point this year? I’m thinking the Miami game with power formations and receiving TE’s. How do you see Dadi Nicolas being used for the rest of the year?

Chris Coleman: These two questions were asked by two different people, but I decided to combine them together into one question. The Hokies really don’t need a whip linebacker unless they are playing a team that runs a lot of power formations such as Alabama, Pitt and Miami.

With so many spread teams these days, the whip spot is an afterthought. It’s far more important to recruit an extra DB or two each year to make sure you have enough defensive backs to find a competent nickel. The whip spot isn’t a starting position anymore. Our whip linebackers are simply pinch hitters. Don’t get me wrong … they are still important. We need our pinch hitter to be Lenny Harris. But the days of the whip linebacker playing a huge role in the Tech defense are long gone.

Dadi Nicolas (r-So.) and Josh Trimble (r-So.) will be Tech’s pinch hitters the rest of the way. I don’t think the whip spot will be too important in most of Tech’s remaining games, but I fully expect Bud Foster to use the whip a lot against Miami. The Hurricanes like to line up in power formations and run the football, so I would expect Nicolas and Trimble to both get reps at whip as they did against Pitt. There will be relatively little coverage responsibilities. Instead, they’ll both be attacking the line of scrimmage.

They could also use the same game plan against Boston College, though I’ll admit I haven’t seen the Eagles play, so I don’t know what