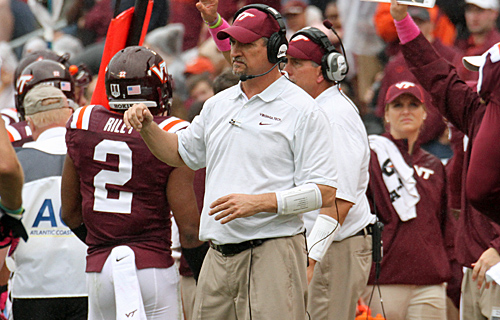 You don’t see too many 6-2 formations in football these days because of the advancement of spread offenses.  However, against certain teams it is a very advantageous formation if you have the personnel to run it.  Pitt was the perfect opponent to use the 6-2 against, and the Hokies certainly had the personnel to pull it off.

In fact, this defense is still used by some high schools around the country.  It was the defense that my high school used when I was in the ninth grade (I was the cornerback out there by himself, with no help … not too fun as a freshman).

Virginia Tech used a variant of the 6-2 during Frank Beamer’s early tenure called the Wide Tackle Six.  It was technically a 4-4 defense with two ends, two tackles, two outside linebackers and two inside linebackers, but those outside backers could align on the line of scrimmage at any point.  That basically made them standup defensive ends.  The regular defensive ends were essentially defensive tackles in that alignment, and the regular defensive tackles became defensive guards.

From left to right, here’s what Virginia Tech’s front eight looked like in 1992.

(Note how small that defensive front is.  Players are a lot bigger these days.)