Today we’ll continue our series on the in-state talent (or lack thereof) of Virginia’s offensive recruits from 2009 through 2011.  The lack of offensive talent in those classes started show on the field in Blacksburg last season, and it’s just as obvious this year as well. 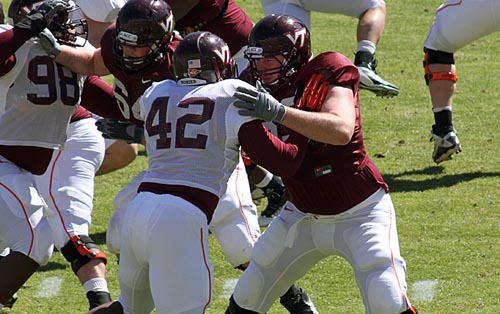 #1 Phillip Simms, QB, Alabama – Simms couldn’t cut it at Alabama.  Somehow he wasn’t good enough to beat out any of the below-average quarterbacks in Charlottesville, either.  It remains to be seen if he’s good enough for Winston-Salem State, his latest school.

#3 Justin Hunter, WR, Tennessee – Hunter turned out to be a big-time wide receiver at Tennessee.  He now plays for the Tennessee Titans, who drafted him in the early second round this past April.

#6 Mark Shuman, OL, Virginia Tech – Shuman didn’t make it into the playing rotation in his first two seasons.  His season debut against Pittsburgh this past weekend was not impressive.

#11 Russell Bodine, OL, UNC – Bodine is rated the #2 center for the 2015 NFL Draft.  He has been a very good interior lineman for North Carolina.

#15 Khamrone Kolb, OL, PSU – Kolb never played at Penn State, and he ended up at Fordham.

#16 Matt Arkema, OL, Virginia Tech – Arkema played some last season, but in 2013 he hasn’t sniffed playing time despite the Hokies struggling to block on the interior.

#17 Conner Davis, OL, UVA – Davis has been starting at guard for UVA since he was a r-sophomore.  However, his ascension to the starting lineup coincides with the approximate time at which the Hoos stopped blocking people.