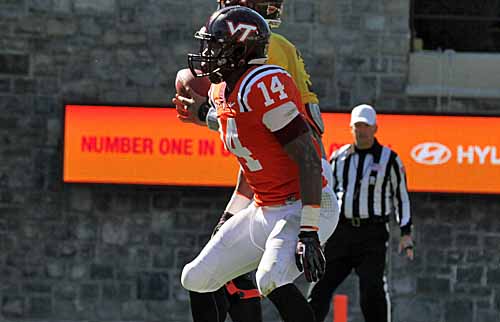 1) Can you truly argue that our rushing game is suspect given the defenses faced, and if so, how?

Chris Coleman: Yes, I think we can argue that the running game is suspect, but I also agree that the rushing defenses the Hokies have faced have been pretty good.  I’d definitely argue that ECU and Marshall’s talent levels were disrespected by Tech fans simply because they don’t play in a power conference.  As I tried to show in my Marshall preview, there were a lot of guys on that team who had offers from some BCS conference programs.

Throwing out FCS Western Carolina, here is the rush defense ranking of all the teams the Hokies have faced this year.

I think those teams are good enough that we have to give them credit for what they were able to do to the Virginia Tech offense.

At the same time, the Hokies themselves deserve some of the blame as well, and much of it is because of youth.  I’ve seen true freshman fullback Sam Rogers miss some blocks simply because he chose the wrong hole.  He’s too inexperienced.  Scot Loeffler admitted on Wednesday that Kalvin Cline doesn’t have the full playbook yet.  Imagine that … our starting tight end is so young and inexperienced that Loeffler can’t install his entire playbook.  That will really limit an offense.

We’ve seen Chris Mangus keep running outside when he should have turned it back inside.  We’ve seen Trey Edmunds miss a hole or two here and there.  And at times, we’ve just seen some of the Tech offensive linemen lose one-on-one battles, which is a talent issue.

These next four games are against run