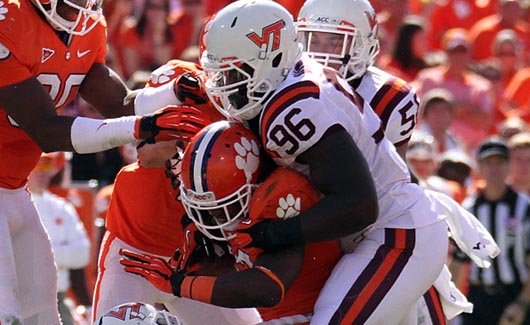 After spending several weeks away from the team, Corey Marshall returned last week and practiced with the scout team.  Earlier this week, it was revealed that Marshall will sit out this season and take a redshirt.

Marshall, a junior who never redshirted in the past, was expected to be the #3 defensive tackle on this year’s team.  However, he left the team for “personal reasons”, and that allowed Nigel Williams (r-Fr.) and Woody Baron (Fr.) to get all the snaps behind starters Derrick Hopkins (Sr.) and Luther Maddy (Jr.) at defensive tackle.

Those young guys played better than expected, so the loss of Marshall was not felt over the first three games.  Their play makes it a much easier decision to redshirt it, just as it made the decision to move Alston Smith to offensive guard easier.

The return of Marshall for the next two seasons will help the Hokies solidify their depth along the defensive line.  He can play end or tackle, depending on need, in both 2014 and 2015.