Who’s impressed you the most through two games, and why?

Jack Tyler appears to be a legit, playmaking linebacker.  It seems that the majority of the time in Bud Foster’s system, the defensive playmakers are the defensive ends and the defensive backs, with the tackles and linebackers being more workmanlike role players who have less flashy responsibilities.  But Tyler is a disruptive force through the first two games, and seems to have a real knack for being in the right place at the right time.

My next two are the Fullers.  With Exum hurt, the personnel shuffling in the secondary, and the necessity of playing a true freshman (albeit a 5-star recruit), I had my concerns regarding the defensive secondary through the early part of the season.  The Fullers are giving us some outstanding defensive back play right out of the gate, and that really gives Bud Foster a lot of options with how he attacks the line of scrimmage.

Finally, a nod to A.J. Hughes.  One third of his punts are over 50 yards, only one has been a touchback so far, and outside of the one return by Alabama, these long punts are only getting returned an average of 3 yards. 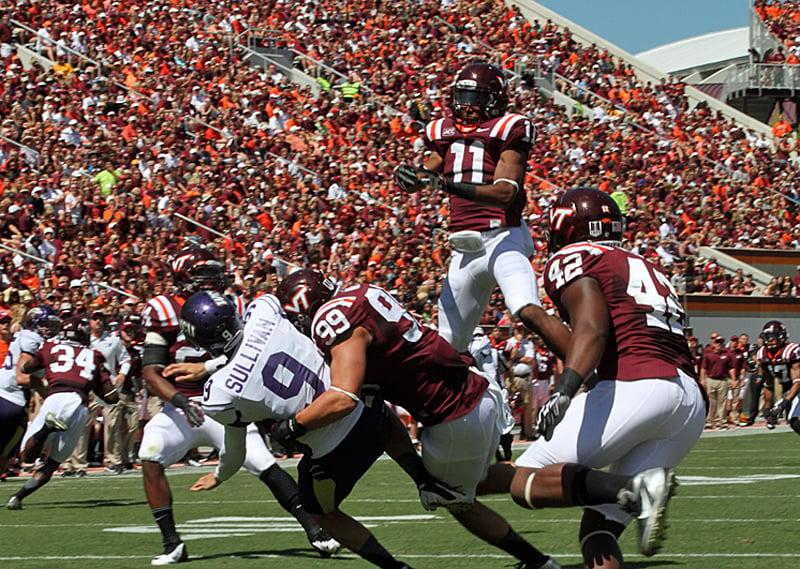 Baltimore Hokie: The entire defense has impressed me.  Everyone has upped their game from last year, and the new player(s) have excelled.  One of my major disappointments in 2012 was the sheer number of defensive players who ‘regressed.’  But