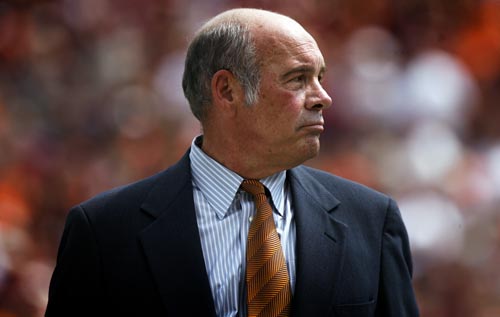 As Jim Weaver nears retirement, many Hokie fans are concerned that his stewardship of the athletic department is slipping. Baseball coach Pete Hughes’ recent departure for Oklahoma, and Mr. Weaver’s hiring of an assistant coach to replace Hughes, has resparked the debate.

Discussing this issue is a glass half-full/half-empty proposition.

Virginia Tech finished #36 in the Directors’ Cup, a good measure of the overall health of a school’s athletic competitiveness. That’s a shade behind their highest ever finish of #35, and sixth in the 12-school ACC, less than a decade after joining.

There are no major scandals associated with VT athletics, and in general, it’s a very well run department.

But at the same time, there are trouble signs amongst the major sports, the ones that grab the headlines and attention of the fans. Men’s and women’s basketball barely registered a pulse last season, both finishing last in the ACC with combined records of 8-28 in conference. Baseball made a nice run at the postseason and hosted a regional, but then got gutted by graduation, the MLB Draft, and Oklahoma, who hired away coach Pete Hughes. Football, of course, notched its worst season in 20 years, and Frank Beamer responded by (finally) cleaning house on the offensive side of the ball.