Virginia Tech is now in the same conference for all sports as Pitt and Syracuse.  Notre Dame is also in the same league in all sports but football.  Welcome to 2003.

The Hokies officially accepted their invitation to the ACC in the summer of 2003, then played one more year in the Big East as lame ducks.  They kissed the Panthers and the Orange (in case you didn’t know, they are the Orange now, not the Orangemen) goodbye.  Tech fans were happy to be escaping so they could start playing ACC teams in a more ideal geographic setting.

Virginia Tech’s fortunes have gone up since joining the ACC.  Pitt has been good in some years, and bad in others.  Syracuse, in general, has been terrible.  Here are the combined records since the 2004 season:

With the exception of the 2012 season, the Hokies have thrived in their new conference home.  Syracuse and Pitt on the other hand could not take advantage of a weakened Big East.  West Virginia took advantage, but eventually rode the money train to the Big 12.  Other than the Mountaineers, nobody could establish any consistency in that league, despite its weakened status.

Though Notre Dame will begin playing ACC teams soon, I’m not going to touch them in this article because their presence has no bearing on the ACC race.  Also, I’m not going to talk about basketball.  That would be a completely different article, needless to say. 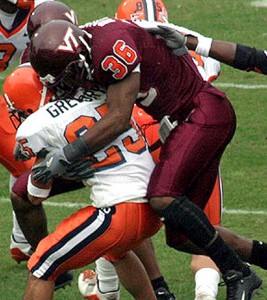 Remember when Syracuse and Virginia Tech were just about on the same level as a programs?  The Donovan McNabb era was entertaining, and the Hokies and the Orange(men) went back and forth each year.  Tech won in Blacksburg, and Syracuse won in the Carrier Dome, with a couple of exceptions.

One of my fondest memories of being a kid was coming to the 1995 Syracuse game, having my grandfather point out the names of all his buddies that got killed in World War II on the War Memorial, and then watching the Hokies all but guarantee a share of the Big East Championship.  Oh yeah, and it was really cold.  That was a great day, and Syracuse was one of the programs that Tech fans looked forward to playing each year.

Ever since Donovan McNabb left, the Syracuse program gradually got worse,